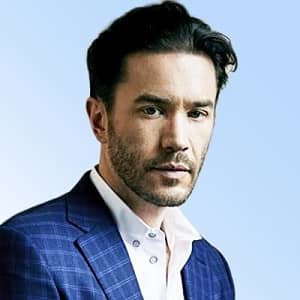 Tom Pelphrey is a professional actor from America. He is best known for being a part of Television series like “As the World Turns”. Viewers also see as the Emmy Award-winning actor who played the role of Jonathan Randall on the CBS soap opera, Guiding Light.

How old is Tom Pelphrey?

As of the year 2020, Tom Pelphrey is 38 years old. He was born under the sign of Leo on the 28th of July 1982, in Howell Township, New Jersey USA. Talking about his family and childhood, there is very limited information available regarding his childhood and family. However, he attended Howell High School and matriculated in 2000. After that, he enrolled at the Rutgers University Mason Gross School of the Arts and completed a Fine Arts degree in 2004. However, he later went on to pursue a career in acting.

How is the professional life of Tom Pelphrey?

Tom Pelphrey started his career in the acting world with the role of Jonathan Randall in 2004 in the romantic drama series entitled entitled “The Guiding Light“. Tom then landed a few recurring roles until the abovementioned show came to a close. In 2010, he took the role of  Mick Dante in 29 episodes of “As the World Turns” and he also showed up in “The Good Wife”, and also a short film entitled “The Elastic”.

During 2011, he appeared for another TV series and even gave his voice to Connor Morgan in the video game entitled “Homefront”. As time went by, it was easier for him to land movie roles from 2013 on. In the year 2014, he appeared for the role of Carl in “A Cry from Within”, and as Joseph Morgan in a single episode of “Black Box”. The year 2017 came off as another extremely successful year for Tom, when he appeared as the role of Ward Meachum in the wildly popular Netflix TV show entitled “Iron Fist”. The show was called off in 2018 and he then went on to appear in an episode of “Blindspot”, and the movie entitled “Jill” featuring him is yet to be released.

He is most notable for his role in “Guiding Light” as Jonathan Randall. There he received a lot of critical acclaims after joining the show in 2004. He was even nominated for a Daytime Emmy Award for the Outstanding Younger Actor in 2005 and went on to win the award as well. Thereafter, he was again nominated in 2007 and won it the second time in 2008 for the same category.

How is the personal life of Tom Pelphrey?

Referring to the personal life of Tom Pelphrey, he has never been married but has been linked romantically with several high profile individuals. As far as concerned, he was in a relationship with actress Gina Togoni in 2005 for about 9 months. She is also known for appearing in various daytime soap operas as “One Life to Live” and “Guiding Light”. It came quite a surprise for their fans when they decided to end their relationship.

As of now, Pelphrey appears to be dating blindspot actress Jaimie Alexander for a while now. However, there is no insight on how they met and when did they start dating each other. They made their red carpet debut during May 2018.

How much net worth does Tom Pelphrey hold?

For the income and net worth of Tom Pelphrey, his net worth is estimated to be somewhere near $12 million. With all thanks to the recognized roles which he has managed to play throughout his career. Seeing as his performances and his involvement with Hollywood is nowhere near an end, it can be concluded that his net worth will surely increase. However, there is no information about his official earnings as he makes throughout his projects.

Looking at the physical appearance of Tom, the 39-year-old actor stands tall at a decent height of 6 feet 2 inches and weighs about 70 kilograms. Whereas, his other body measurements such as chest-bicep-waist size and shoe size are currently unavailable to the public domain. Moreover, his body features of light brown hair and a pair of hazel eyes.

Speaking of social media presence, the star is available on platforms like Instagram and Twitter. On Instagram, he goes by the username @tommypelphrey as a verified user with more than 103K followers. Similarly, his Twitter handle is @TomPelphrey with over 29.6K followers.

Our contents are created by fans, if you have any problems of Tom Pelphrey Net Worth, Salary, Relationship Status, Married Date, Age, Height, Ethnicity, Nationality, Weight, mail us at [email protected]