Tommy Lee is an American musician and founding member of Motley Crue. 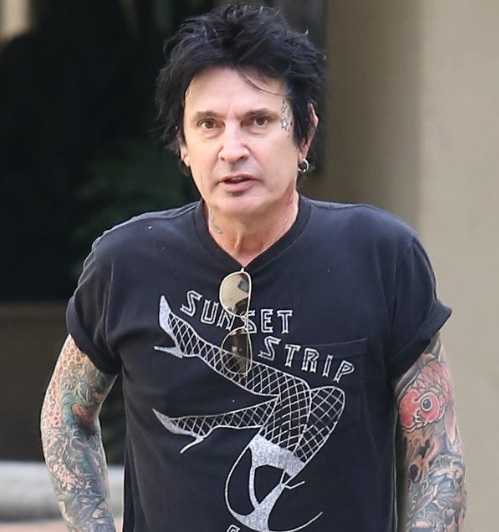 Thomas Lee Bass, popularly known as Tommy Lee is an American musician and founding member of Motley Crue. He is a drummer, songwriter, DJ, and has pursued solo musical projects as well. He also founded rap-metal band Methods of Mayhem.

Former Motley Crue drummer, Tommy Lee, 56, is once again a married man. He married social media star, Brittany Furlan on the special day, 14 February 2019. He has been now married for the fourth time.

They announced their marriage via social media on the same day.

Earlier, they started dating in 2017 and announced their engagement on 14 February last year.

Lee previously married Elaine Starchuk, Heather Locklear, and Pamela Anderson. He was also engaged to Bobbie Brown. But they split before getting married.

Tommy Lee was born on 3 October 1962. His birth name is Thomas Lee Bass. He was born to American father, David Lee Thomas Bass, and Greek mother, Vassiliki “Voula” Papadimitriou. His birthplace is in Athens, Greece. He holds American and Greek nationality. His zodiac sign is Libra. When he was a year old, his family moved to California. He has a young sister, Athena Lee. He attended Royal Oak High Schook and South Hills High School. Later,  he dropped out of high school without graduating. He left high school to pursue a career in music. He listened to Van Halen, Led Zeppelin, Kiss, Cheap Trick, Sweet, and AC/DC as a teenager.

He started his musical career with the band Suite 19.

During the late 1970s, he met Nikki Sixx, who was impressed by Lee’s drumming and was forming a theatrical band.

He changed his name to Tommy Lee. Fans nicknamed him “T-bone” as he was 6 feet and 2 and a half inch tall and had a lean physique.

Guitarist Mick Mars joined the band. Tommy recommended Vince Neil as a singer to the band. And Motley Crue was formed.

Motley Crue released their debut album, Too Fast for Love in 1981. The album’s success earned the band a strong fanbase.

Elektra Records signed the band and re-released the band’s debut album in 1982.

The band managed to establish themselves as one of the biggest hard rock/metal bands throughout the 1980s, they delivered hit releases such as Shout at the Devil, Theatre of Pain, Girls, Girls, Girls, and Dr. Feelgood.

He had a separate fanbase at the band as he used several memorable gimmicks during his drum solos at concerts.

He was legendary for mooning the crowd at nearly every show.

The band was always popular for their decadent behavior both on and offstage including excessive amounts of drugs, such as cocaine, heroin, pills, and alcohol.

The band went on the Greatest Hits tour in 1999.

He appeared in Motley Crue’s autobiography, The Dirt in 2001.

In 2004, he reunited with the original Motley Crue line-up to release the double-disc anthology album, Red, White & Crue.

They embarked monumental reunion tour, The Red, White & Crue Tour 2005: Better Live Than Dead in 2005. They finished the year ranking at number 8 on the Top Concert Money Earners list. According to Billboard Boxscore, they played 81 shows and grossed $33 million.

Nikki Sixx announced in November 2007 that he was no longer the member of Motley Crue. Lee already quit the band in September 2007.

However, they recorded their new album, Saints of Los Angeles in 2008. The band went on tour, Crue Fest in the same year.

In 2014, he reunited with Motley Crue bandmates in a farewell tour. They signed a legal document that prevented them from ever touring under the Motley Crue moniker ever again.

As rap metal’s popularity increased, he formed a band, Methods of Mayhem in 1999.

The band released their self-titled album in the same year.

They went on a tour to support their debut album for Methods of Mayhem.

He then parted ways with Methods of Mayhem partner TiLo and started recording with the members of Incubus.

He has made guest appearances on albums by Stuart Hamm, Nine Inch Nails, and Rob Zombie.

He has also contributed a song, “Planet Boom” to the soundtrack of then-wife Pamela Anderson’s 1996 movie, Barb Wire.

He has produced an album for the pre-Goldfinger project from John Feldmann and Simon Williams, the Electric Love Hogs.

He released his first solo album, Never a Dull Moment in 2002.

He released his second solo album, Tommyland: The Ride and his autobiography, Tommyland in 2005.

He has also recorded drum tracks for the alternative rock band Jack’s Mannequin’s album, Everything in Transit.

He played keyboards with Deftones at a benefit show for defunct bassist Chi Cheng in 2009.

In March 2010, he co-presented the International Dance Music Awards (DMA) along with Roger Sanchez and DJ Rap.

In 2014, he joined the Smashing Pumpkins to perform drums for their Monuments to an Elegy album.

In 2006, he formed a new band called Rock Star Supernova with Jason Newsted and Gilby Clarke.

Lukas Rossi was selected as the lead singer for Supernova from the 2006 season of Rock Star.

The band released their self-titled debut album in November 2006.

Lee started working as an electronic dance music DJ with his Methods of Mayhem DJ/production partner, DJ Aero in 2000. They together are known as Electro Mayhem.

In 2004, they debuted as DJs on the mainstage at Ultra Music Festival during Winter Music Conference.

They have clocked over 60 club dates as DJs throughout North America in 2007.

He made his theatrical film debut in a minor role in the 2001 fantasy romance film, Vanilla Sky.

Earlier, he made his television debut on the talk show, Howard Stern in 1994.

In 2004, he starred in Tommy Lee Goes to College, a reality show for NBC. He was also one of the producers of the show.

He also starred in another reality TV show for Planet Green, Battleground Earth with rapper Ludacris.

Tommy Lee has been married four times. Elaine Starchuk is his first wife. He then married actress Heather Locklear in May 1986. They separated in 1993. She then met model Bobbie Brown. They were engaged but later split before getting married.

He then married actress Pamela Anderson on 19 February 1995. They got married just four days after they met each other. The couple has two sons together, Brandon Thomas and Dylan Jagger. The couple divorced in 1998. They later reunited briefly but split again in 2001. They once again reunited in 2008 but split once again for the last time.

Lee served six months in the county jail in 1998 after pleading no contest to kicking Pamela Anderson while she was holding their son Dylan. Lee assaulted his wife resulting in minor injuries.

He also faced another legal trouble in 1998 after his Nazi swastika tattoo on his arm was exposed by a Jewish photographer. He later removed the tattoo.

He was arrested in October 1999 in North Carolina after instigating a riot during the 1997 concert at Greensboro Coliseum.

He pleaded guilty for engaging in a fight and assaulting Kid Rock at the 2007 MTV Video Music Awards ceremony.

As of 2019, the net worth of Tommy Lee is estimated at around $70 million. He earned his fortune mostly working in the music industry. According to Billboard Boxscore, their ‘The Red, White & Crue Tour 2005: Better Live Than Dead’ grossed $33 million playing 81 shows in 2005.

Our contents are created by fans, if you have any problems of Tommy Lee Net Worth, Salary, Relationship Status, Married Date, Age, Height, Ethnicity, Nationality, Weight, mail us at [email protected]