Atlanta Hawks point guard Trae Young is in great firm. He has been very successful on the court. Like his professional life, he has made good advances in his personal life too. He was dating a girl since a long time and now he has also proposed to her. Trae made the engagement news public on his social media.

Trae Young and his engagement

American basketball player, Trae Young is in high spirits. He proposed to his longterm girlfriend, Shelby Miller. She said yes. He announced this good news on his Instagram on Thursday night. He uploaded a photo of him going down on one knee holding Shelby’s left hand. In the 4 pics he shared, the whole area has a decoration of blue and white balloons. Shelby looks surprised and has placed her right hand over her mouth. In another photo, she is showing her sparkling diamond ring and in another, the couple are together and Shelby is flashing her new engagement ring to the camera. In the fourth photo, the two are embracing each other.

He captioned this photo for his 3.9 million followers:

Shelby put up a similar post but with a different caption that read:

Jazz star Donovan Mitchell, rapper Quavo, Kings forward Buddy Hield and guard DeAaron Fox were amongst those who put up congratulatory messages for the adorable couple.

Trae and Shelby: the relationship timeline

Trae Young, 23 whose full name is Rayford Trae Young met Shelby Miller at the University of Oklahoma where both were studying. Young was playing for the Oklahoma Sooners basketball team. They went public on their relationship in October 2017 by means of an Instagram post. Shelby is a cheerleader and Trae had at that time showed up to see her cheer the football game in Oklahoma.

Shelby used to share photos of them on her Instagram but Trae did not post as much. He was relatively quiet about his relationship with her. They were seen together on several occasions in public and now comes this happy announcement from the pair. It is not clear where the proposal was done and whether it was in the presence of friends and family members and relatives of both sides.

Who is Shelby Miller?

Shelby was born on 25 October 1995 and her current age is 26 years. Her birthplace is Norman, Oklahoma. Her parents are Mike Miller and Sherri Miller. Mike, her father has a local auto accessories and detail shop. Her mother Sherri uses to work as a teacher at Norman Public Schools. Presently, she is serving as an adjunct instructor at the University of Oklahoma.

Shelby finished her schooling from an Oklahoma school and later joined the University of Oklahoma. She has done a degree in Communication and Media (2014 to 2019). She was a cheerleader in her college days. Shelby is also good in dancing. It is not certain what job she is holding now. She appeared on ‘Today’ Show with Al Roker in 2017.

Shelby shifted to Atlanta after her graduation and the two stay together since his drafting with NBA. She supports him in his games and is spotted in the sidelines cheering him. Trae also has a great-going career with Atlanta Hawks and is one of the best players in it.

Many people drive their family dream successfully stepping on the steps of their role model. As quoted, the professional basketball player, Trae Young lived the thought of his father who played as a standout player at Texas Tech. He is acknowledged for his career in NBA as a point guard position for Atlanta Hawks since 2018. More bio… 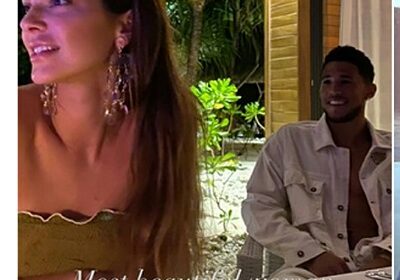