Tyler Butler-Figueroa is a young violinist on America's Got Talent, whose cover of Kelly Clarkson's 'Stronger' earned him Simon Cowell's coveted Golden Buzzer. 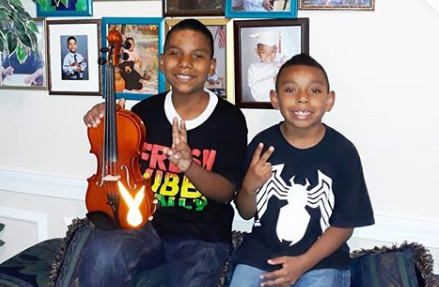 Tyler Butler-Figueroa is an American violinist and cancer survivor. He is a North Carolina native. Tyler started playing the violin when he was 7 1/2 years old after he was bullied by other kids. He reveals that he was diagnosed with leukemia when he was only 4 years old. He doesn’t want to be known as the kid with cancer. He wants to be known as the kid with the violin. He plays the violin to Kelly Clarkson’s “Stronger” and his talent is endless. Tyler has the crowd on their feet almost immediately. Simon raves over Tyler’s “amazing talent” and has the perfect response to the people who bullied Tyler: THE GOLDEN BUZZER!

Who are the parents of Butler Figueroa?

Back to his early life, Tyler Butler Figueroa was born in North Carolina, United Staes. His mother is Kisua Butler-Figueroa and the information about his father is yet to be revealed. He has a brother named Adam who helped to share AGT updates and violin videos of him through his Instagram account.

Moves towards his education, He is a fifth-grader at Walnut Creek Elementary.

Tyler said that after he started losing his hair from chemotherapy treatments, he felt sad and embarrassed to go to school. Those feelings only worsened when the kids at school began to laugh at him for being different; he said that they would stay away from him and say his cancer “was contagious.”

After his moving performance, which earned him a standing ovation, the judges asked Tyler how he was feeling now that his audition performance was over. He told them he was feeling really proud of himself. Cowell told Tyler “You are an extraordinary young man. We hear too many stories of people being bullied, but I could tell you one thing: Most people are bullied because they’re better than the people who bully them.” He then said he had something to say to the bullies on his behalf and pressed his Golden Buzzer, sending Tyler automatically into the live round of the competition.

When did Tyler Butler learn violin?  How his violin makes him famous?

Tyler’s mom, Kisua, revealed that he first discovered the violin after seeing a flyer at school for free afterschool violin lessons. When he told her he wanted to do the program, she said: “But no one in our family plays an instrument and the violin?”

Kisua recalled that the violin gave him energy and happiness again, and she felt like she finally had her son back.

Tyler told the camera “When I play the violin, it helps me forget about all the bad stuff. I just didn’t want to be the kid with cancer. So now, I’m the kid who plays the violin.”

How tall is Tyler Butler Figueroa?

There is no information available regarding his body statistics on the internet. That’s means, it is yet to be revealed. In the case of revealed, we will let you know.

Our contents are created by fans, if you have any problems of Tyler Butler-Figueroa Net Worth, Salary, Relationship Status, Married Date, Age, Height, Ethnicity, Nationality, Weight, mail us at [email protected]