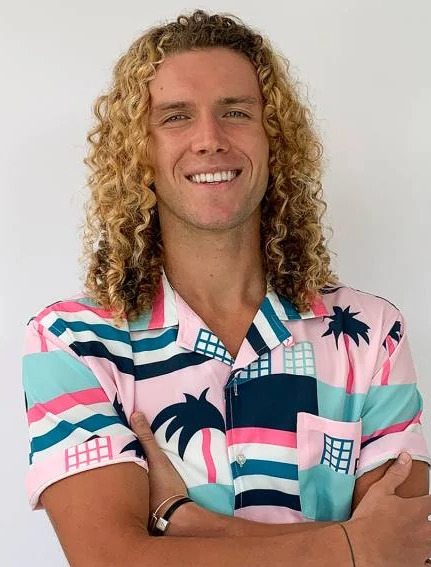 A reality television personality from the USA is named for Tyler Crispen. He rose to fame after being the contestant and runner up of “Big Brother 20”. This title also came with a prize of $25,000. He won the title of America’s Favorite Housemate in the finale of Big Brother season 20. Not only this but he also came back to host the Week 2 Love Island tie-in Power of Veto competition on “Big Brother 21” (US) and returned on “Big Brother 21” (US), alongside Kaycee Clark and JC Mounduix as the BB20 Final 3 to discuss the BB21 Final 3. He again appeared on Big Brother house for its 22nd season. As of now, he is a houseguest on Big Brother 22 (US). Prior to his appearance in this TV show, he worked as a lifeguard in South Carolina. As a lifeguard, he loves the water and the vast beach where he does surfing frequently. As a social media star, he has more than 386K followers in his Instagram account. Besides this, he also runs the YouTube channel “Tangela Inc.”. He has recently launched his own jewelry company with Angela as his business partner. He made the announcement regarding the launch of his company on Instagram. The company is called “Naut And Chain” and the jewelry they sell is all inspired by the ocean. There is a large range of products available which can be viewed on the website.

After the Big Brother 22 Week 5 Power of Veto competition, he told Bayleigh Dayton and Da’Vonne Rogers he wanted to sacrifice his game for “the movement.” When it fell through, many fans accused the BB20 runner-up of “performative activism” and believed he only brought up “the cause” to save face outside the house. Bayleigh and Da’Vonne became emotional while thanking Tyler and called his sacrifice “the most courageous thing” they’ve seen a houseguest do on the show. He also revealed he wanted to “stand for something bigger than himself” and recognized that the ladies were there for a “bigger cause.” He admitted he wasn’t enjoying himself the Big Brother Season 22 in a conversation with David Alexander. According to the BB20 runner-up, he feels “too much pressure” to live up to his previous performance and doesn’t like that others admire him for his ability to manipulate or lie well.

Being a reality television star.

Being the runner-up in the reality show “Big Brother 20.”

Since she was voted America’s Favorite Houseguest.

Tyler Crispen was born in what city?

Tyler Crispen was born on February 17, 1995, in Rossford, New York, United States of America. His nationality is American, and he is of American-White descent. Brown-White is his race hue. His birthday comes under the Aquarius Zodiac sign. He is a devout follower of Christianity. He went to Bowling Green State University in Ohio for his studies. The name of the degree he studied in at the university, on the other hand, is still unknown. In the year 2020, he celebrated his 25th birthday. His parents and siblings’ identities have not yet been revealed.

Tyler Crispen started his professional career as a lifeguard in South Carolina.

After that, he joined the “Big Brother” competition and finished as the show’s runner-up.

Early on, he rose to the role of ringleader of the Level Six alliance, using his strategic mind and social charm to gain everyone’s confidence and influence many evictions.

In the 27th season episode 6 of “Dancing with the Stars,” he was seen in the audience with his mother, Angela.

They also played in the Professional Bowlers Association in 2019, which was broadcast on Fox on February 3rd.

Tyler is currently on the road with his girlfriend, fellow BB20 contestant Angela Rummans.

He’s also made it a point of late to use his voice to support the Black Lives Matter movement’s vital work and aid in the fight against racial inequality.

With his girlfriend Angela, he also runs the YouTube channel Tangela Inc., which has over tens of thousands of subscribers.

Tyler Crispen’s Girlfriend: Who Is She?

Tyler Crispen and Angela Rummans met on the reality show “Big Brother” season 20, and they will remember it fondly. They didn’t win the show, but they did win each other’s hearts. He expressed his fear of encountering Rummans. He also realized she was the one for him from the beginning, and once they had less people in the building, they began spending more time together, and Rummans admitted something to him. With the passing of time, their relationship grows stronger. They also revealed that they had purchased a home in Hilton Head Island, South Carolina, together. They are currently sharing their home, which they brought with them. He is not gay and has a straight sexual orientation. He and his partner have a wonderful friendship, and they are less likely to split up in the future. The couple is having the time of their lives. The couple told ET online that while they have no immediate plans to marry, they are certain that it will happen someday, and that there is no hurry right now.

Tyler Crispen’s net worth and salary are unknown.

Tyler Crispen is an American reality television celebrity who is best known for being the Big Brother 20 runner-up. He has gained tremendous popularity and success in his career. He is one of the few people with such a broad spectrum of experience who stays faithful to everything he undertakes. He’s already achieved a lot in his career, and he still has a lot more to achieve. He has a long path ahead of him, but he has all the tools required to succeed in the industry. Tyler Crispen’s net worth is projected to be $250K as of 2020. Without a doubt, he is well compensated for his work. The film industry is his source of income. He is content with his life as a result of his professional earnings. With his hard work and good fortune on his side, he will double his current wealth.

Tyler Crispen is a cute young man with a sultry physique. His physique is athletic. He has taken great care of his body, which draws a lot of attention to him. He is 1.77 m tall and stands at 5 ft 10 in. His balanced bodyweight is 73 kilograms (172 pounds). His eyes are blue, and he has long brown curly hair. He has a good body overall, with a tattoo that looks like a palm tree on his chest.

Our contents are created by fans, if you have any problems of Tyler Crispen Net Worth, Salary, Relationship Status, Married Date, Age, Height, Ethnicity, Nationality, Weight, mail us at [email protected]