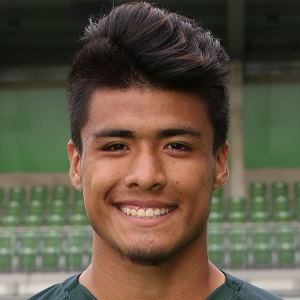 Ulysses Llanez is a professional football player from America. He is quite famous for playing as forward for Dutch side SC Heerenveen, on loan from Bundesliga side VfL Wolfsburg.

Where is Ulysses Llanez from?

Ulysses Llanez was born on April 2 of 2001, in Lynwood, California, United States. He is American by nationality, Mexican by ethnicity, and is currently 19 years old.

Personally, Ulysses seems to very secretive about the information he discloses to the media as there is no details about his parents’ names and siblings. Likewise, there is no record on his educational background either.

How is the professional life of Ulysses as a footballer?

Professionally, Ulysses Llanez is a football player who debuted from the club LA Galaxy II in a 0–2 loss against Phoenix Rising FC on August 6 of 2017. The star came on the 88th-minute as a replacement for Josh Turnley. On the day of his 18th birthday, April 2, 2019, he announced that he had signed an official contract to play for the German side VfL Wolfsburg. Later on September 15, 2020, Dutch Eredivisie side SC Heerenveen announced that they had signed Llanez as a loan through the end of the 2020–21 season.

Internationally, he was born in America and was called to youth training camps for the Mexican U-16 squad in 2017. However, he never made an appearance there. Later on, he went on to represent the United States at the U-17, U-18, U-19, U-20, and senior levels. Many of the people might be even unaware of the fact that he was an integral part of the United States team at the 2019 FIFA U-20 World Cup as well.

It was the year 2019 when Llanez was finally called up to the senior squad for the first time. He made his senior debut for the United States, starting and scoring the only goal in 1–0 friendly win over Costa Rica on February 2, 2020.

The 19-year-old star is moving up in the world of football. He still has a lot of time before reaching the peak of his career. According to several media sites, his estimated net worth is reported be about $1 million. It’s a huge milestone for a 19-year-old guy to reach such fame and earning at such an early age. However, there is no information about his official earnings through his fees and brand endorsements.

Referring to the love life of Ulysses, there is very little or no information available online about Ulysses Llanez’s relationship and dating history. There is no hint on his social media about the issue either. Similarly, we can assume that he is currently in a relationship with his football career and isn’t dating anyone at the moment. Therefore, this relationship status is most probably single.

As a football player, it must be no doubt to say that Ulysses Llanez is very fit physically due to all his time he has spent on the training ground. He stands tall with a height of 5 feet 9 inches and weighs about 68 kilograms. Likewise, he has brown hair and a pair of black eyes.

Our contents are created by fans, if you have any problems of Ulysses Llanez Net Worth, Salary, Relationship Status, Married Date, Age, Height, Ethnicity, Nationality, Weight, mail us at [email protected]