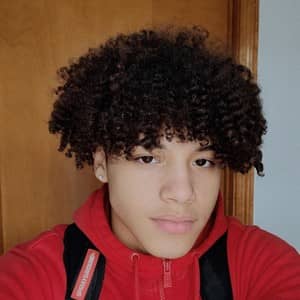 Vallyk is an American social media personality. The young influencer has gained a huge fan following in TikTok with over 1.7 million followers whereas his Instagram account has more than 618k followers. In addition to this, he is also fairly popular on Youtube with more than 63.1k subscribers.

Pena is one of his parents’ three children and has one sister and one brother. His sister’s name is Jasline and she is also very popular on social media.

His ethnicity is Dominican and Puertorican.

How did Vallyk become so famous?

Vallyk first started gaining attention from Instagram. His random selfies and other pictures started gaining a lot of female attention. However, he has deleted pictures he had posted prior to April 2019 for some undisclosed reasons. As of August 2020, his Instagram account has over 618k followers.

After getting attention on Instagram, he started posting videos on TikTok where his fame reached another level. His lip-sync and other interesting content gained a lot of attention. As of August 2020, his self-titled TikTok account has over 1.7 million followers. In addition to this, his videos have crossed over 46.4 million likes in total.

In February 2019, he started his Youtube journey with a self-titled channel. His first ever video is titled ‘My Curly Hair Routine’. Since then, he has posted several videos which have went on to become viral. His first ever video is his most popular one with over 131k views. Some of his other popular videos are titled ‘I GOT A GIRL PREGNANT PRANK’, ‘CRAZY Day With My Family’, ‘PLAYLIST VLOG’, ‘MY Q&A VIDEO’, ‘MY MOM FINESSE THE SYSTEM’, etc. As of August 2020, hide videos have gained more than 791k views and his channel has over 63.2k subscribers.

What is the Net Worth of Vallyk?

Vallyk has an estimated net worth in the region of $100k – $1 million as of 2020. With his increasing number of followers and subscribers on his Youtube channel, his net worth is estimated to increase in the coming years.

The young social media sensation stands at a height of 5 feet 6 inches and weighs around 52 kg. He has curly brown hair and a pair of brown eyes.

As of now, Vallyk seems to be single. He is not dating anyone and is not in a relationship with anyone. He seems to be focused on his career and studies as of now. So far, he has remained very private and has not revealed any of the girl(s) he has previously dated.

Vallyk is active on social media sites. He has around 10k followers on Twitter and around 618k followers on Instagram. Moreover, his TikTok account has over 1.7 million followers.

Our contents are created by fans, if you have any problems of Vallyk Net Worth, Salary, Relationship Status, Married Date, Age, Height, Ethnicity, Nationality, Weight, mail us at [email protected]