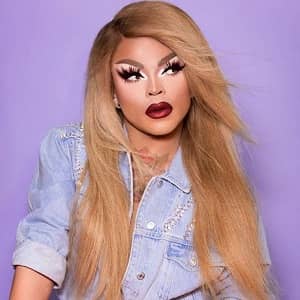 Vanessa Vanjie Mateo is a popular American drag performer, singer, and actress. She rose to fame after appearing as a contestant in the tenth season of the reality TV series, RuPaul’s Drag Race.

When was Vanessa Vanjie Mateo born?

Vanessa Vanjie Mateo, real name Jose Cancel, was born on the 3rd of October 1991 in Puerto Rico. As of 2020, her age is 29. Her nationality is American and her ethnicity is mixed. She has also revealed that she comes of Puerto Rican descent.

Vanessa has not revealed anything about her biological parents. However, we know a lot about her drag family. Vanessa is the drag daughter of Alexis Mateo and Jeffrey Kelley. As such, she is a part of the Mateo Empire alongside her drag sisters Jenavive and Victoria Mateo. Vannessa actually took the surname Mateo from her drag mother Alexis.

Vanessa’s education is also a subject of mystery. She does seem well educated but the details on where she studied are not available.

How did Vanessa Vanjie Mateo build her career?

Vanessa rose to fame after she competed in the tenth season of RuPaul’s Drag Race. Unfortunately, she was eliminated in the very first episode. Still, her parting words, Miss Vanjie… Miss Vanjie… Miss Vanjie.. was iconic and soon became an internet meme. The meme spread like wildfire through the internet and in the process, it launched Vanessa to the limelight. In 2019, Vanessa returned to the drag race in its 11th season. This time though, she was in the competition until the penultimate episode, in which she was eliminated and placed fifth.

Vanessa has been featured on the cover of Gay Times and has appeared in many other reality TV shows. She also tried her luck in the music industry with her single I’m Vanjie, in 2018. Aside from this, she has appeared in a couple of music videos for the popular singer Iggy Azalea. After appearing on the music video for Iggy’s song Sally Walker, she even performed as a backup dancer to the song on Jimmy Kimmel live in 2019.

What is Vanessa Vanjie Mateo’s net worth?

As of 2020, Vanessa has an estimated net worth of around 500k U.S. dollars. She is still in the early phases of her career so, we can expect this number to shoot up in the following years. She has not revealed her annual salary.

Vanessa Vanjie Mateo stands at a height of 5 feet 9 inches tall and weighs roughly 68 kilograms. She is blessed with blue eyes and brown hair.

Who is Vanessa Vanjie Mateo dating?

As of now, Vanessa Vanjie Mateo is single. She seems t be focused on her career at the moment and is not dating anyone.

Previously, Vanessa was in a relationship with Canadian Drag Queen, Brooke Lynn Hytes. The two met through RuPaul’s Drag Race and dated for some time. However, this didn’t last long and they confirmed their break up at the reunion of the 11th season of the show.

Vanessa is active and quite popular on social media. As of now, she has gathered a following of over 1.5 million fans on Instagram and has over 277k followers on Twitter.

Our contents are created by fans, if you have any problems of Vanessa Vanjie Mateo Net Worth, Salary, Relationship Status, Married Date, Age, Height, Ethnicity, Nationality, Weight, mail us at [email protected]