Victoria Caroline Beckham OBE is an English singer, fashion designer and television personality. She rose to prominence in the 1990s as a member of the girl group the Spice Girls, in which she was nicknamed Posh Spice. 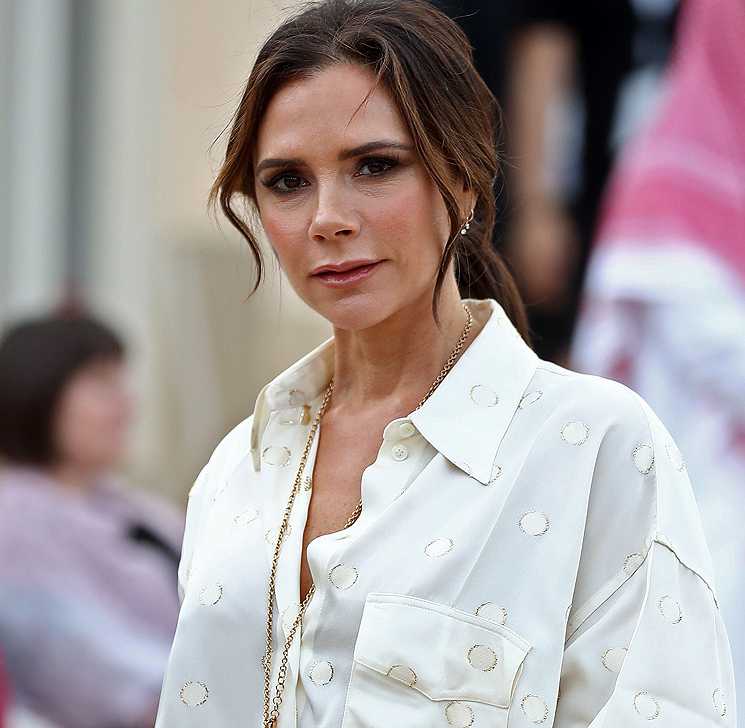 I'm not materialistic. I believe in presents from the heart, like a drawing that a child does.

I like a man who can be a real friend, has a good sense of humor, a good pair of shoes and a healthy gold card.

If you haven't got it. Fake it! Too short? Wear big high heels, but do practice walking!

Victoria Beckham is an English businesswoman, fashion designer, and singer who rose to fame as a member of the all-female pop group, “Spice Girls”. Victoria is internationally recognized as the style icon and fashion designer as well as she has a high-profile wardrobe. Beckham was named one of the 100 most powerful women in the United Kingdom. Beckham is popularly known as “Posh Spice” and wife of the popular soccer player, David Beckham.

What is Victoria Beckham Famous for?

When and Where was Victoria Beckham Born?

Victoria Beckham was born on April 17, 1974, in Harlow, Essex, England. Her birth name is Victoria Caroline Adams. Her nationality is British. Beckham belongs to mixed(English and German) ethnicity while Aries is her zodiac sign.

Victoria Beckham is the eldest daughter of Anthony William Adams(father) and Jacqueline Doreen(mother). Her father was an electronics engineer while her mother was a former insurance clerk and hairdresser. Her parents even had founded an electronics wholesale business that helped their economic condition. Victoria was raised in Goffs Oak, Hertfordshire along with her younger siblings: a sister, Louise and a brother, Christian Adams.

Victoria was always interested in the glamour world and after watching the musical film, “Fame”, she decided to pursue her career in music. Later, she was enrolled at Jason Theatre School and then she attended Laine Theatre Arts where she studied dance and modeling.

Victoria studied at St. Mary’s High School where she was bullied for her family’s wealth and was even thrown rocks. Victoria later became a member of a band, “Persuasion”.

What Are Victoria Beckham’s Achievements and Works?

Who is Victoria Beckham Married? How many children does she have?

The gorgeous lady Victoria Beckham is a married woman. Victoria is married to one of the greatest soccer players of all time, David Beckham. Victoria first met David at a charity football match in the 1990s until then she had no idea of who he was.

Later David asked her for a meet and then they started dating in 1997. The couple got so close that they got engaged in 1998 just after two years of dating.

David and Victoria were called “Becks and Posh” at the time. Later on March 4, 1999, the couple welcomed their first baby boy, Brooklyn Joseph Beckham and on July 4, 1999, the couple tied their knot at Luttrellstown Castle, Ireland in a grand wedding that they were reported to be sitting in golden thrones. Soon after they welcomed their second son named Romeo James Beckham on September 1, 2002.

The couple is blessed with four children all together as later on Feb 20, 2005, and July 10, 2011, they welcomed their third son named Cruz David Beckham and an only daughter named Harper Seven Beckham.

Currently, Victoria is living a great luxurious life with her husband and children in Los Angeles after they sold their Beckingham Palace which was purchased right after their wedding.

Who were Victoria Beckham’s Ex-Boyfriends?

Previously, Victoria Beckham was in a relationship with the famous Canadian actor, Corey Haim. They met at a recording studio in London and dated for one year. Victoria first dated the British model, Stuart Bilton during her early days.

Later then she dated Mark Woods for three years. Victoria was even engaged with Mark in 1993 but their relationship couldn’t work and they broke up in 1994.

How Much Does Victoria Beckham Earn?

The fashion and style icon, Victoria Beckham has a well earning through her career as a businesswoman, fashion designer, and singer. Beckham has managed to amass a great fortune of the amount in million dollars through her several fashion lines, clothing lines, music albums, TV shows and fashion week.

Beckham enjoys her fortune which is estimated to be around $300 million.

Previously, she had signed a contract with Telstar Records and 19 Management worth £1.5 million. Beckham while was a part of “Spice Girls” had earned $20 million(each) and for appearing in Tesco advertisements each was paid £1 million. Besides Beckhams together have a net worth of around $900 million.

With all the fortune in million dollars, Beckham has been living a great lavish and luxurious lifestyle. Beckham herself has car collections including “Range Rover”, “Alfa Romeo”, and “BMW”.

How Tall is Victoria Beckham?

Our contents are created by fans, if you have any problems of Victoria Beckham Net Worth, Salary, Relationship Status, Married Date, Age, Height, Ethnicity, Nationality, Weight, mail us at [email protected]