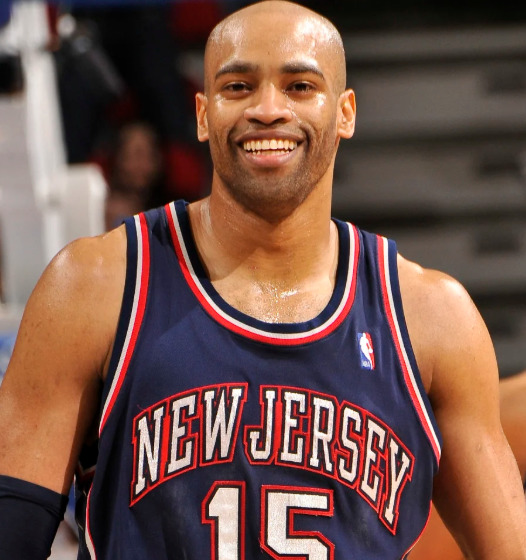 Vincent Lamar Carter Jr. famed as Vince Carter is a famous American professional basketball player who is currently playing for the Atlanta Hawks of the National Basketball Association (NBA). In his debut for the Hawks on 17th October 2018, he started at forward and scored 12 points in a 126-107 loss to the New York Knicks, becoming the second-oldest player in NBA history to start a season opener at 41 years and 264 days old. He plays both shooting guard and small forward, but has occasionally played power forward during the latter part of his career. He is the only player in NBA history to play 22 seasons, and the only player to play in four different decades (the 1990s, 2000s, 2010s, and 2020s). He also won the 1999 NBA Rookie of the Year Award and won the Slam Dunk Contest at the 2000 NBA All-Star Weekend. He entertained crowds with his leaping ability and slam dunks, earning nicknames such as “Vinsanity”, “Air Canada”, and “Half Man, Half Amazing”. He has 967k fans on Twitter. He has Facebook likes are 39.2k. On his Instagram, he has, 35.1k followers. and more than 966k followers on Twitter. His jersey number for Hawks is 15.

When the NBA suspended its season on March 11, Hawks wing Vince Carter recognized immediately that he may have made his last appearance as an NBA player that night, discussing the possibility after the game. “I ended on a pretty cool note,” Carter said. The Hawks’ original schedule called for a home finale in Atlanta on April 15, the last day of the regular season. On April 10, the team had been scheduled to play in Toronto, where Carter started his NBA career in 1998 and blossomed into a star. While the 43-year-old admits it “would have been nice” to face the Raptors in Toronto one last time, he insists he’s “good with it” if that game doesn’t end up happening.

What is the birthplace of Vince Carter?

Vince Carter was born as Vincent Lamar Carter Jr. on 26th January 1977. His birthplace/hometown is in Daytona Beach, Florida, the USA. He is of African-American ethnicity/race and his nationality is American. Talking about his parents/family; his mother’s name is Michelle Carter and father’s name is Vince Carter Sr. He also has two brothers, Jeff Scott and Chris Carter. His sister’s name is Alicia Scott. As per his education, he joined Mainland High School in Daytona Beach where he was honored McDonald’s All-Americans. After completing high school he joined the University of North Carolina where he reached twice in the Final Four of the NCAA Tournament. He helped the North Carolina to consecutive ACC Men’s Basketball Tournament titles and Final Four appearances in his sophomore and junior seasons. His birth sign is Aquarius and his religion is Christian.

How was Vince Carter’s Career?

Awards and Achievements of Vince Carter

Vince Carter is the only player in NBA history to appear in a game in four different decades. In addition to this, he is one of six players in NBA history to average at least 20 points, 4 rebounds, and 3 assists per game in 10 straight seasons. Also, he is one of six players in league history to record 24,000 points, 6,000 rebounds, 2,500 assists, 1,000 steals, and 1,000 3-point field goals. His award and achievements include:

Who is the Wife of Vince Carter?

Talking about the personal life of Vince Carter, he is a married man. As of now, he is married to Sondi Carter, a NASM trainer. The duo is blessed with a son and a daughter. As of now, he is leading a happy life with her and the duo is enjoying their life a lot with their children. He is very loyal towards his wife and there is no sign of divorce between them. His sexual orientation is straight and he is not gay.

Previously, he was married to Ellen Rucker; a chiropractor in July 2004 but due to some reasons, they eventually got divorced in 2006. They have one daughter Kai Michelle Carter who was born on the 1st of July 2005. He also had an alleged affair with Sheneka Adams.

How tall is Vince Carter?

Vince Carter is a handsome hunk with an athletic body build. He has got a tall height of 6 feet and 7 inches. His balanced weight consists of 100 Kg. He has black eyes and he is bald. His shoe size, dress size, and other body measurements are unknown. Overall, he has got a healthy body with a cool personality.

Our contents are created by fans, if you have any problems of Vince Carter Net Worth, Salary, Relationship Status, Married Date, Age, Height, Ethnicity, Nationality, Weight, mail us at [email protected]