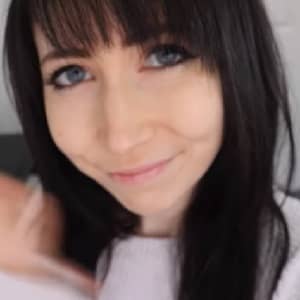 Wolfychu is a British Youtuber, gamer, and animator. She mainly gained fame by uploading animation meme videos on her Youtube channel which now has more than 3.11 million subscribers.

Wolfychu was born as Kayleigh Smyth in Surrey, England on the 20th March 1995. As of 2021, her age is 26. There is no information about her parents. She has older brothers but has not revealed much about them. Her family is of Irish ancestry.

When she was around six years old, she moved to Spain with her family.

There is no information about her educational background. She has not revealed which school or college she went to but it is known that she has completed her high school education.

Wolfychu had no idea what she wanted to do with her life after high school, so she started posting her drawings online, which gained some attention. She became interested in a guy called Jordan Sweeto as she became more involved in the online world.

Every day, the two began chatting, and a romance blossomed between them. She moved to Australia, where Jordan lives, and set up her YouTube channel and started making videos with his help. Her first post, “Marble Soda | meme,” was uploaded in 2017 and has over 1.3 million views.

As of 2021, her Youtube channel has more than 3.11 million subscribers whereas her videos have gained more than 360 million views. She also has secondary channels named ‘Wolfychu LIVE’ and ‘Wolfuchu Shorts’ which have 232k and 72k subscribers respectively.

What is the Net Worth of Wolfychu?

Wolfychu has an estimated net worth of around $500k as of 2021. Her main source of income is Youtube and she now has three different channels. Her main channel has over 3 million subscribers and has more average views.

The Youtuber stands at a height of 5 feet 6 inches. She has not revealed her weight and other body measurements. She has blue eyes and black hair.

Who is Wolfychu dating? Boyfriend, Relationships

Wolfychu is currently in a relationship. She is currently dating Jordan Sweeto. The couple met online, and after a few months of constant messaging and video calling, Wolfy decided to move and live with him.

The beautiful pair has been together since 2016. Her boyfriend started out by uploading song covers but now upload gameplays and animations and has over 1.2 million subscribers on his Youtube channel. The couple seems very happy together.

You may also like to read more about the Bio, Career, Net Worth, Relationships, and more about Thebakeey, MomoFifaHD, Marina Joyce, and more.

Our contents are created by fans, if you have any problems of Wolfychu Net Worth, Salary, Relationship Status, Married Date, Age, Height, Ethnicity, Nationality, Weight, mail us at [email protected]