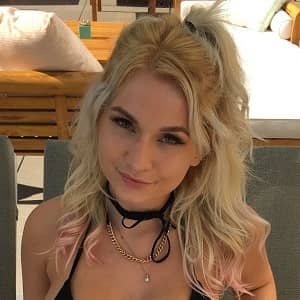 Zoie Burgher is a popular Youtuber, social media personality, and former Twitch streamer. She is a controversial personality who rose to fame for her overly sexual Twitch streams which included twerking and extremely revealing clothes which eventually got her banned from the platform.

When was Zoie Burgher born?

Zoie Burgher was born on the 29th of November, 1995 in the U.S. As of now, her age is 24. Her nationality is American. She has not revealed her ethnicity as of yet.

Zoie has been private when it comes to her personal life. As such, even the names of her parents are not available. She also hasn’t said anything about her siblings and so she might be a single child. All that we know about her early life is that she was raised in Florida.

How did Zoie Burgher build her career?

Zoie started in her career as a Twitch streamer. She did have social media but had not gained significant popularity on the internet. She rose to fame after her twitch streams, in which she played Call of Duty while twerking and wearing extremely revealing outfits, were viewed by a large no of people. This made her popular in a very short while, and also got her a huge fanbase. However, she got banned from Twitch for her overly sexual content.

After gaining notoriety on Twitch, Zoie moved to Youtube. She mainly uploads vlogs and her old streams there. Her popularity on Twitch helped her grow her channel very fast. She even uploaded nude photos of her in her Youtube video and this action was widely criticized. But, after being criticized by the audience and warned by Youtube, her content has become much more genuine enjoyable today. Zoie is also extremely popular on social media such as Instagram, Facebook, and Snapchat.

What is Zoie Burgher’s net worth?

As of 2020, Zoie Burgher has an estimated net worth of roughly 500k U.S. dollars. She has not revealed her annual salary as of yet.

What are Zoie Burgher’s physical statistics?

Zoie stands at a height of 5 feet 8 inches. Along with her good looks and stunning figure, she is also blessed with brown eyes and blond hair. She has not revealed her weight and body measurements until now.

Who is Zoie Burgher dating?

Zoie is currently in a relationship with D’Angelo Taylor, a crane operator in San Diego. He is a single father of 2 and despite that, things are pretty good between Zoie and him. The two started dating a short time after meeting each other at a club. The exact details on when they started dating are not available but it looks like they will be together for a while.

Zoie Burgher is active and very popular on Social Media. She is popular on Instagram, Twitter, as well as Snapchat. She has two accounts on Instagram, zoieburgher_official, and luxezoie which has over 5k and over 190k followers respectively. On twitter, Zoie has 2.9k followers.

Our contents are created by fans, if you have any problems of Zoie Burgher Net Worth, Salary, Relationship Status, Married Date, Age, Height, Ethnicity, Nationality, Weight, mail us at [email protected]