Aaron James Ramsey is a Welsh professional footballer who plays as a midfielder for Serie A club Juventus and the Wales national team. Ramsey mainly plays as a box-to-box midfielder, but has also been deployed on the left and right wings. 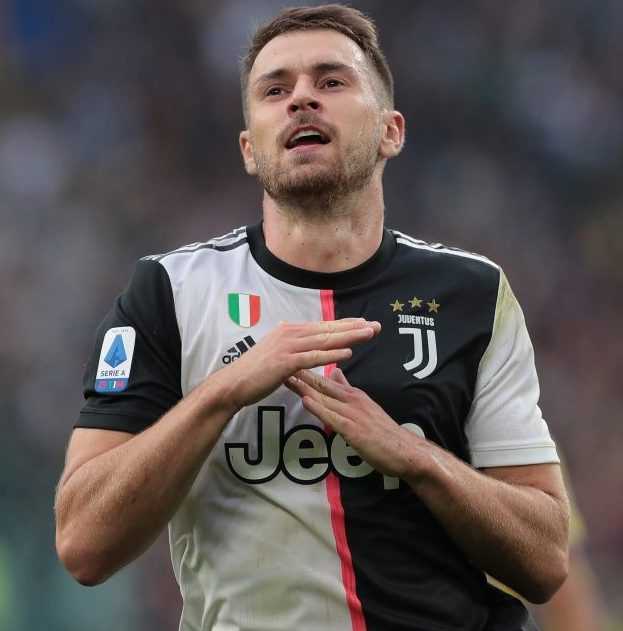 Aaron James Ramsey, professionally known as Aaron Ramsey is a Welsh professional football player. he plays as a midfielder for Serie A club Juventus and the Wales national team. He started his professional football career from Cardiff City. He spent most of his career with Arsenal. He also played for Nottingham Forest and Cardiff City. He joined Juventus in July 2019. He represented Wales national team at different youth level before making senior international debut in 2008. He also represented Great Britain at the 2012 Olympics.

What is Aaron Ramsey Famous For?

Where was Aaron Ramsey Born?

Aaron Ramsey was born on 26 December 1990. His birth name is Aaron James Ramsey. His birth place is in Caerphilly, Wales. He holds Welsh nationality. He was born to a father, Kevin Ramsey, and a mother, Marlene Ramsey. He has a brother, Josh Ramsey.

He attended Ysgol Gyfun Cwm Rhymni (Rhymney Valley Comprehensive School) in Caerphilly County Borough. He attended a Urdd training session at Caerphilly at the age of nine. He was a keen rugby player and athlete before growing his interest in football. He signed to join the youth development program of Cardiff City in 1999. He was later approached by scouts from rugby league side St. Helens. He declined the offer to play rugby. He was also 2005 Welsh Schools’ Athlete Assocation pentathlon champion. In 2006, he was ranked 4th in Great Britain in the under 17 age group.

He polished his skills for 8 years in Cardiff City’s youth development program.

He signed his first professional contract in December 2007.

He made his first professional start for Cardiff against Chasetown in January 2008.

He scored his first league goal in a 3-3 draw against Burnley.

He made his competitive debut for Arsenal in the Champions League third qualifying round against FC Twente on 13 August 2008.

He made his league debut for Arsenal against Blackburn on 13 September 2008.

He scored his first Arsenal goal against Fenerbahce in the group stages of the UEFA Champions League.

He signed a new long-term contract with Arsenal in July 2009.

He scored his first league goal against Portsmouth on 22 August 2009.

He suffered a double fracture in his lower right leg during a match against Stoke City on 27 February 2010 that kept him away from football in November 2010.

While inactive, he had signed a long-term contract extension with Arsenal in June 2010.

Arsenal loaned Ramsey to Nottingham Forest in November 2010 until January 2011.

He made only 5 appearances for the club and returned to Arsenal.

He returned to Cardiff City in a one-month loan move in order to gain match fitness.

He made 6 appearances for Cardiff and returned to Arsenal. Cardiff asked for a loan extension but Arsenal rejected the offer.

He signed a new long-term contract with Arsenal in December 2012.

He suffered thigh strain in December 2013 that kept him out of football for three months.

He signed a new contract extension with Arsenal in March 2014.

He returned to football in April 2014.

He was one of the six players on the shortlist for the PFA Young Player of the Year award in April 2014.

He scored the winning goal for Arsenal in the 109th minute in the 2014 FA Cup Final. The win ended club’s nine-year wait for a trophy.

He was also the member of the Arsenal team that finished 2017-18 EFL Cup in the second place. Arsenal also finished runner-up in the UEFA Europa League in the 2018-19 season.

It was announced in February 2019 that Ramsey would join Italian club Juventus following the 2018-19 season.

His Arsenal career ended after he suffered a hamstring injury in April 2019.

He signed a 4-year contract with Juventus on 11 February 2019. The move was announced to take effect on 1 July 2019. According to his contract, he would receive 400,000 pounds per week, making him the highest-earning British player ever based on basic salary.

He made his official debut for Juventus in their opening Champions League fixture against Atletico Madrid on 18 September 2019.

He made his Serie A debut against Verona on 21 September 2019. He scored his debut goal for Juventus in the same match.

He made his senior international debut against Denmark on 19 November 2008.

He scored his first senior international goal against Liechtenstein in the 2010 World Cup Qualifier.

He was appointed the permanent captain of Wales in March 2011. He became the youngest ever Wales captain at the age of 20 years and 90 days old.

He scored his first international goal as a captain against Northern Ireland in May 2011.

He represented Great Britain football team at the 2012 Olympics.

His captaincy was given to Ashley Williams in October 2012, Wales having lost series of fixtures.

He was a key player in the Wales national team that reached the semi-final of the Euro 2016, where they were defeated by eventual champions, Portugal. He finished the tournament as the joint-highest assist provider alongside Belgian Eden Hazard, with four assists.

Who is Aaron Ramsey Married to?

Aaron Ramsey is a married man. He is married to Colleen Rowlands. They were childhood sweethearts. The couple tied a knot to each other on 8 June 2014. The couple has a son, Sonny, born in 2015.

He supports animal conservation and the World Wildlife Fund.

What are Aaron Ramsey Body Measurements?

Aaron Ramsey stands at a height of 1.78 m i.e. 5 feet and 10 inches tall. He has an athletic body build. He has dark brown eyes and his hair color is dark brown as well.

What is Aaron Ramsey Net Worth?

Aaron Ramsey earns from his professional football career. His income comes from contracts, salary, and endorsements. He has an endorsement deal with Adidas. He joined Arsenal for 4.8 million pounds in 2008 and later signed several contract extensions with the club. After he signed a contract with Italian club Juventus, he became the highest-earning British player ever based on basic salary. According to his contract, he would receive 400,000 a week at Juventus. Besides football, he signed a modeling contract with Elite Model Management London in January 2014. His salary and net worth will be updated soon.

Our contents are created by fans, if you have any problems of Aaron Ramsey Net Worth, Salary, Relationship Status, Married Date, Age, Height, Ethnicity, Nationality, Weight, mail us at [email protected]