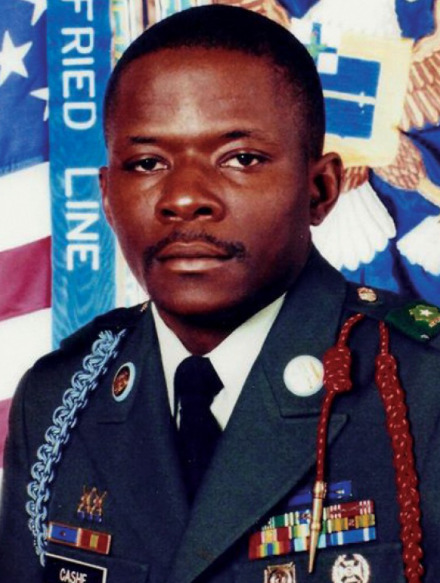 Alwyn Crendall Cashe famed as Alwyn Cashe was a United States Army Non-Commissioned Officer of Company A, 1st Battalion, 15th Infantry Regiment, 3rd Infantry Division. He was posthumously awarded the Silver Star for heroism in Iraq. Cashe’s award is controversial, prompting significant subsequent debate and discussion of an upgrade of his award to the Medal of Honor. His rank was Sergeant first class. He was in the lead Bradley Fighting Vehicle when it struck an Improvised Explosive Device, rupturing the vehicle’s fuel cell, covering Cashe in fuel, and causing the vehicle to burst into flames. Rescuing six soldiers from the flames, he was burned over 72% of his body. He died as a result of his injuries on 8th November 2005. He was awarded the Silver Star for his actions, the military’s third-highest decoration for valor, awarded for gallantry in action against an enemy of the United States. Cashe also received a Bronze Star and Purple Heart during his service. Cashe was a man “who always had a hunting story to tell,” said Maj. Leon Matthias, Jr., who worked side-by-side with Cashe. The Military Times also includes a word from his sister, who reminisced: “I told him, ‘Don’t go over there playing a hero. You learn how to duck and come home’’ He said, ‘I’m doing the job I was trained to do. I have to take care of my boys’.”

The Meaning of Alejandro Villanueva’s Helmet in Relation to Alwyn Cashe; Pittsburgh Steelers

The National Football League (NFL) has allowed players to wear helmet decals honoring victims of institutional racism, as the Pittsburgh Steelers have done. The decision has been celebrated, and the Steelers’ decision to go a step further has recently gained attention. However, Alejandro Villanueva has arguably gained more recognition than the rest of the squad. Alejandro Villanueva honoured Alwyn Cashe by wearing his name on the back of his helmet during the Steelers’ game against the New York Giants at MetLife Stadium on Monday, September 15th, 2020. The other members of the squad, on the other hand, had Antwon Rose Jr.’s name on theirs. On June 19th, 2018, Antwon, a 17-year-old African American, was fatally shot in East Pittsburgh. He was a passenger in a car that police claimed was involved in an earlier shooting, according to the source.

He is best known for serving as a non-commissioned officer in Company A, 1st Battalion, 15th Infantry Regiment, 3rd Infantry Division of the United States Army.
Since six soldiers were saved from flames caused by an improvised explosive device.

Alwyn Cashe’s Cause of Death

Alwyn Cashe died on November 8, 2005, in San Antonio, Texas, at the age of 35. In Iraq, he suffered lethal consumes by repeatedly joining a consuming vehicle to save the lives of individual warriors. As a result of his burns, he died.

What is Alwyn Cashe’s birthplace?

Alwyn Cashe was born on July 13, 1970, with the birth name Alwyn Crendall Cashe. Sanford, Florida, was his birthplace and hometown. He is of Afro-American descent and is of American nationality. His ethnicity is black. His zodiac sign was Cancer, and he was a devout Christian. His 35th birthday was recently celebrated. Alwyn grew up in Oviedo, Florida, and finished his education at Oviedo High School, graduating in 1988. Kasinal Cashe White, his sister, is his other sibling.

How was Alwyn Cashe’s professional life?

His name was enlisted in the US Army after graduation.

Prior to his tour with the 3rd Infantry Division, he served as an infantryman in the 1991 Gulf War and in Iraq after the 2003 invasion.

He was also a Platoon Sergeant of the 1st Platoon of Alpha Company from Forward Operating Base Mackenzie, Sergeant First Class, but he was deployed to Iraq on a route clearance mission on the 17th of October 2005.

He was driving the lead Bradley Combat Vehicle when it collided with an IED, rupturing the fuel cell, drenching Cashe in fuel, and causing the vehicle to burst into flames.

He was hospitalized as a result of this, and he left the car, assisting the driver to escape the burning Bradley and extinguish the fire on his clothing.

As his fuel-soaked uniform burned, he hurried to the back of the vehicle and reached into the fire to save wounded soldiers.

He saved 6 soldiers from the fire with his valiant actions and declined medical evacuation before the rest of the soldiers were rescued.

Unfortunately, the interpreter was killed in the fighting, along with ten soldiers, seven of whom were seriously wounded.

He had been burned over 72 percent of his body by the time he arrived.

On November 8, 2005, he died of his injuries at Brooke Army Medical Center in Fort Sam Houston, Texas.

On July 19, 2014, Alwyn’s name was inscribed on a new Army Reserve center in Sanford, Florida.

In addition, he was nominated for the Silver Star Award.

In addition, he received the Bronze Star Medal and the Purple Heart.

Who is Alwyn Cashe’s spouse?

When it came to Alwyn Cashe’s marital status, he was a married man. Tamara Cashe, his lovely companion, was his life partner. He has a son named Andrew Cashe from his marriage. Andrew Cashe completed US Army Infantry One Station Unit Training (OSUT) at Fort Benning, Georgia on July 23, 2020. He was not homosexual and had a straight sexual orientation. He was survived by his wife and son prior to his death.

What is the Net Worth of Alwyn Cashe?

How tall is Alwyn Cashe?

With an athletic body build, Alwyn Cashe was a brave man with a strong body. He had a tall height matching with his body weight but the exact details about body measurements, height, the weight have not been revealed yet. He had got a charming smile with a glowing face.

Our contents are created by fans, if you have any problems of Alwyn Cashe Net Worth, Salary, Relationship Status, Married Date, Age, Height, Ethnicity, Nationality, Weight, mail us at [email protected]