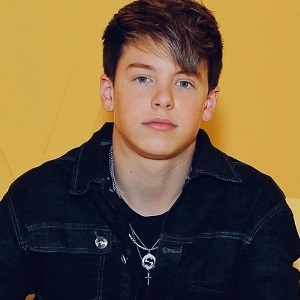 Carson Lueders is an American pop singer, songwriter, actor, as well as social media personality. He is famous for his lip-sync, singing, dancing videos, and as a different content creator in social media.

How old is Carson Lueders?

Carson Lueders was born on July 26, 2001, in Spokane, Washington, United States. His real name is Carson James Lueders. As of 2020, his age is 19. His birth sign is Leo. He follows the Christianity religion.

Carson was born to parents Jon Leuders(father) and Diane Leuders(mother). He has one older brother named Jackson Lueder, and a sister, Olivia Lueders. Both are an Instagram star and social media personality.

He studied at Spokane High School, Spokane, Washington, United States. As of June 9, 2019, he posted on Instagram that he is graduated his high school. He also posted several graduation ceremony pictures with his friends.

How did Carson Lueders Pursue his Career?

Carson Lueders is very good at his singing from his childhood. He is interested in playing the guitar too. Therefore, he started to participate in different shows and perform on it. He has gained a lot of good responses from it.

Carson gets inspired by different personalities like Keith Urban and Kenny Chesney. On July 30, 2008, he made a self-titled youtube channel. Then, he started uploads a cover video of many big artists like Justin Bieber, Ed Shereen, and Shawn Mendes.

Then, after a good response from the audience, he decided to release his own album. You’re the Reason, Remember Summertime, Take over Released, Beautiful, Crush, Bae Back are some of his famous tracks. As of 29 May 2020, he premiered an official music video titled,  “Young and Free” on his Youtube channel.

On the other hand, he is active on Instagram and TikTok too. he posts various activities, dancing, singing on it. He often comes with his brother and sister on videos. Lately, he has celebrated his 19th birthday with his parents where he posts by giving thanks to his fans.

Carson started his acting career form the Drama, Dirt, in 2018. In the same year, he gets a chance to play in a comedy movie titled, Chicken Girls: The Movie. In this move, he portrayed the role of Ace. From 2017 to 2019, he appeared on the Chicken Girls, Tv Series. In 2020, he made a guest appearance on the TV series, Family Reunion.

How tall is Carson Lueders?

Carson has a height of around 5 feet 9 inches and weight is around 60 kg. He has hazel eyes and blonde hair.

What is the Net Worth of Carson Lueders?

Lueders has an estimated net worth of $1 million. His main source of income is social media. Although he has not revealed his annual salary, on average, as a YouTuber, his estimated monthly earnings range between $1.5 – $2.5 k. He is an Instagrammer and on average, their earnings range from $6,6 k  – $11 k. Moreover, from his TikTok account, his average earning per post is $4 k to $7 k.

In 2017, he was dating American actress, Brighton Sharbino. They stayed in a relationship for several months only. In 2016, there were rumors that he was dating Jojo Siwa and Jordyn Jones.

Our contents are created by fans, if you have any problems of Carson Lueders Net Worth, Salary, Relationship Status, Married Date, Age, Height, Ethnicity, Nationality, Weight, mail us at [email protected]