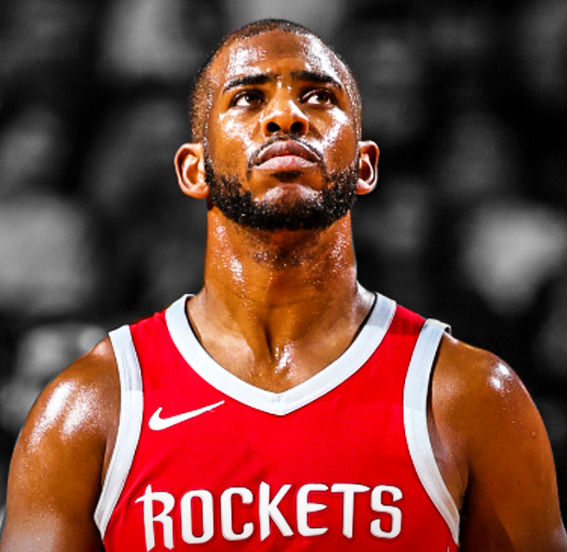 Chris Paul is a professional basketball player. At present, he is playing for the current team, Oklahoma City Thunder of the NBA. His playing position is Point guard. Initially, he was selected as the fourth pick of the 2005 NBA Draft by the New Orleans Hornets. He had his NBA debut on 1st November 2005, when his New Orleans Hornets faced Sacramento Kings. Chris and the Hornets won that game by 26 points with the end result standing 93 to 67. On his debut, he played a total of 33 minutes and scored 13 points, dished 4 assists, and grabbed 8 rebounds. e has won the NBA Rookie of the Year Award, an NBA All-Star Game Most Valuable Player Award, two Olympic gold medals, and led the NBA in assists four times and steals six times. He has also been selected to ten NBA All-Star teams, eight All-NBA teams, and nine NBA All-Defensive teams. He made his All-Star debut during the 2007-2008 season. He has won the bronze medal in the 2006 FIBA World Championship held in Japan. Because of his personality and sportsmanship in 2013, he was chosen to be the president of the National Basketball Players Association. Chris has his own foundation named “CP3”. He is also nicknamed as CP3.

Chris Paul proved that he’s still one of the NBA’s best players with the Thunder. He began the season with three years and $125 million remaining on his contract. He hadn’t played more than 61 regular-season games the last three seasons because of injuries. Oklahoma City was able to strong-arm Houston into surrendering first-round picks in 2024 and 2026 (both 1-4 protected), along with pick swaps in 2021 and 2025. The Thunder’s season is now over with a last-second loss to the Rockets in Game 7 of their first-round playoff series. It’s another bummer ending for CP3 in the playoffs, but his season should be viewed as nothing but an incredible success.

What is the Birthplace of Chris Paul?

Chris Paul born on 6th May 1985 in Winston-Salem, the USA. His birth name/real name is Christopher Emmanuel Paul. His parents are Charles Edward Paul and Robin Jones. He has an American Nationality but he belongs to African-American Ethnicity. He has an elder brother named Charles Paul. In his childhood, his father taught both of them to play basketball and football due to a former athlete himself. He attended West Forsyth High School where he excelled at playing basketball. In the early years of his life, a lot of colleges wanted to recruit him due to his amazing skill performance even his height was short. He then attended Wake Forest University. As of 2020, he celebrated his 35th birthday. He is Christian by religion and his Zodiac sign is Taurus. He is currently residing in Bel-Air, Los Angeles, the USA.

Awards and Achievements of Chris Paul

Who is Chris Paul married to?

Chris Paul is a married man. He is married to his long-term girlfriend, Jada Crawley. The couple first met while attending Wake Forest University together, but they started dating in 2003. Chris and Jada married on 10th September 2011. The duo is also blessed with two children, Christopher Emmanuel Paul II (born on 23rd May 2009), and Camryn Alexis Paul (born on 16th August 2012). On 11th November 2011, he appeared with his family on Family Feud. At present, the duo is enjoying their present life happily without any sign of divorce. His sexual orientation is straight and he is not gay.

What is the Net Worth of Chris Paul?

Chris Paul is a professional basketball player. A year after Paul moved to Houston Rockets from Los Angeles Clippers, he signed a four-year, $160 million contract which gave him the NBA’s third-highest average salary. As of 2020, the net worth of Chris Paul is estimated to have $120 Million. As of 2020, his salary is around $40 Million annually. His major source of wealth comes from his basketball career. He was 24th in their list of the World’s highest-paid athletes as of 2019. He also endorsement deals with companies like Nike and State Farm. As of today, he is living a luxurious lifestyle from his career earnings. He bought his mansion in Bel-Air from the popular American singer Avril Lavigne for $8.5 million in 2012.

How tall is Chris Paul?

Chris Paul stands tall at the height of 6 ft 1 in with a bodyweight of 79 kg. He has black hair and dark brown eyes. His body build is athletic. His shoe size is 12.5 US. He is one of the hardest-working players, who has ever played in the hardest basketball league in the world i.e. The NBA. He does regular weight training and a lot of agility and speed training. Since a young age, he used to work on his sprinting form with his older brother C.J. As Chris said, he and his brother used to have 30-meter sprints. He maintains his body a lot to keep himself fit and fine. Overall, he has got a healthy body with a charming personality.

Our contents are created by fans, if you have any problems of Chris Paul Net Worth, Salary, Relationship Status, Married Date, Age, Height, Ethnicity, Nationality, Weight, mail us at [email protected]