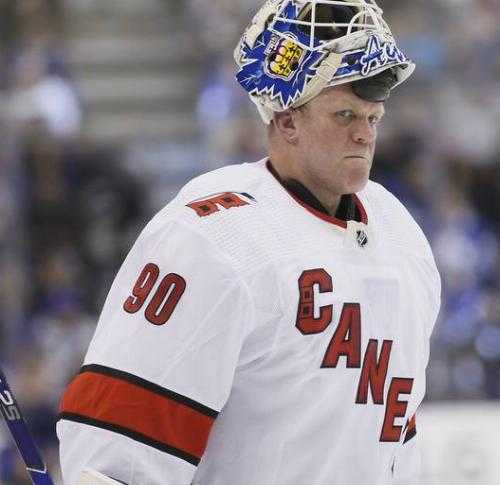 David Ayres is a Canadian ice resurfacer driver. He is best known for playing the NHL game on 22 February 2020, where he played for the Carolina Hurricanes as an emerging backup goaltender against the Toronto Maple Leafs. He became the first emergency goaltender in NHL history to record a win after the Hurricanes defeated Leafs 6-3.

What is David Ayres Famous For?

Played as an emergency goaltender for Carolina Hurricanes in a 6-3 win against the Toronto Maple Leafs.

Where was David Ayres Born?

David Ayres was born on 12 August 1977. His birth place is in Whitby, Ontario in Canada. He holds Canadian nationality. He was born to a father, Bob, and a mother, Mary. He has a brother named Chris. He grew up playing ice hockey. He became ill and his mother donated him a kidney for his kidney transplant in 2004.

He started working as a Zamboni driver at Ricoh Coliseum in Toronto in 2012. He also worked as a maintenance worker there.

He is also a practice goaltender for the Toronto Marlies and Maple Leafs.

He played 8 games with the Norwood Vipers of the Allan Cup Hockey League in 2014.

He served as a backup to both the Toronto Marlies and Charlotte Checkers in the AHL.

Caroline Hurricanes were playing against the Maple Leafs on 22 February 2020.

Ayres and his wife were sitting in the stands enjoying the game.

Both of the Hurricanes’ goaltenders, James Reimer and Petr Mrazek suffered an injury during the game.

Ayres signed a one-game contract with the NHL.

He then entered as the emergency backup goaltender for the Hurricanes during the second period.

He played almost an entire half of the game in goal.

He allowed the first two shots he faced.

He later stopped 8 shots on goal that helped Hurricanes to defeat Maple Leafs 6-3.

He became the first emergency backup to enter a game since Scott Foster in 2018.

He also became the oldest goaltender aged 42 years and 194 days to win his NHL regular-season debut.

He was named the first star of the game.

He received his game-worn jersey and the game puck.

The Hurricanes later announced to sell jersey with Ayres’ name and jersey number 90. The royalties from the sale would go to Ayres. The portion of the proceeds was announced to be donated to a kidney foundation of Ayres’ choice.

Who is David Ayres Married to?

David Ayres is a married man. He is married to Sarah Ayres. He rose to fame only after appearing as an emergency goaltender in the NHL on 22 February 2020. Detail information about his personal life will be updated soon.

How tall is David Ayres?

What is David Ayres Net Worth?

David Ayres earns from his career as an ice resurfacer driver. He had previously played ice hockey as a goaltender for the Norwood Vipers in the Allan Cup Hockey League in the 2014-15 season. He also served as a backup to both the Toronto Marlies and Charlotte Checkers in the AHL. He earned $500 and made a record after making his NHL debut as an emergency goaltender for the Hurricanes against the Maple Leafs on 22 February 2020. His net worth will be updated soon.

Our contents are created by fans, if you have any problems of David Ayres Net Worth, Salary, Relationship Status, Married Date, Age, Height, Ethnicity, Nationality, Weight, mail us at [email protected]