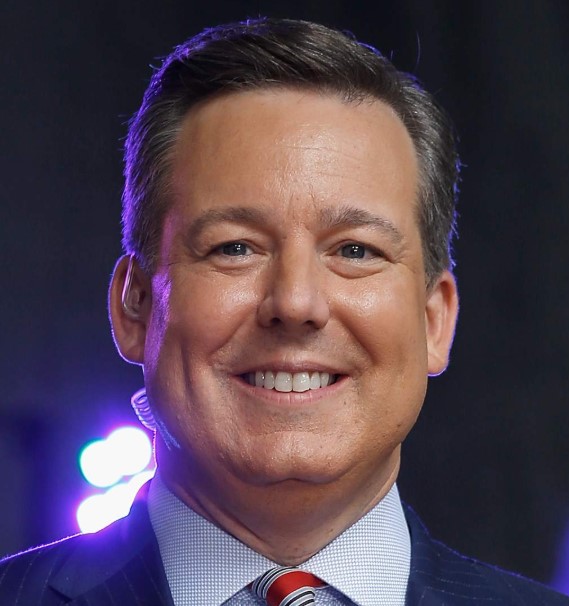 Ed Henry is an American journalist who is well known as the former co-host of a television news program, “America’s Newsroom” on the Fox News Channel, along with Sandra Smith. He joined the Fox News Channel in 2011 and served for over 9 years until July 1, 2020, when Fox News terminated him due to allegations of sexual misconduct years ago by a former employee.

He also served as the chief national correspondent for the Fox News Channel in their Washington, D.C. bureau. Been in this field for over 9 years, Henry has received several wards including Everett Dirksen Award(2005) and Merriman Smith Award(2008). Besides, Henry is active in social media sites with over 369k followers on Twitter: @edhenry and over 39k followers on his Instagram: @edhenrytv.

What is Ed Henry Famous for?

Where was Ed Henry Born?

Ed Henry was born on July 20, 1971, in Queens, New York, United States. His birth name is Edward Henry. His nationality is American. Henry belongs to White ethnicity while Cancer is his zodiac sign.

Ed Henry grew up in his hometown where he attended St. John the Baptist Diocesan High School in West Islip. Later, he got graduated earning a Bachelor’s Degree in English from Siena College in Loudonville, New York.

Henry began his career right after his graduation along with late newspaper columnist, Jack Anderson.

What Does Ed Henry Do For Living?

They had a grand wedding followed by a blasting wedding reception at Society Café Encore Las Vegas that included a 22-layer chocolate wedding cake with whipped cream frosting, which was an elaborate replica of the White House, weighing 70 pounds.

Within their 10 years long marriage, the couple share 2 children: a son, Patrick Henry, and a daughter, Mila Henry. Currently, Henry lives a happy love with his wife and 2 children in Chevy Chase, Maryland.

Besides, in 2019, Henry donated a part of his liver to save his sister who had been suffering from liver failure.

What happened to Ed Henry?

Ed Henry, a long-time working journalist, was fired by Fox News Channel on July 1, 2020, over sexual misconduct allegations made by a former Fox employee on June 25. The allegation referred to some willful sexual misconduct in the workplace years ago.

On the response of which, Henry made a statement from his attorney Catherine Foti on Twitter Wednesday evening, claiming that he denies the allegations and is confident that he will be vindicated after a full hearing in an appropriate forum.

Previously, on May 5, 2016, it was said that Henry took a temporary leave of absence following an alleged extramarital affair with a Las Vegas hostess and stripper. Henry subsequently lost his White House correspondent position and returned to Fox News in late August 2016 as a chief national correspondent.

Ed Henry has quite good earnings from his professional career as a former journalist of CNN and Fox News. Having been in the field of journalism for over a decade, Henry has managed to amass a million worth fortune from his several headline coverings.

His net worth is estimated to be around $6 million with his annual salary of around $2 million.

How Tall is Ed Henry?

Ed Henry is a good-looking man with good health in his 40s. With his way of representing the news and incidents, Henry has managed to establish himself as a journalist in the huge world of journalism. He stands tall with a height of 5ft. 11inch. He has a fair complexion with grey hair and blue eyes.

Our contents are created by fans, if you have any problems of Ed Henry Net Worth, Salary, Relationship Status, Married Date, Age, Height, Ethnicity, Nationality, Weight, mail us at [email protected]