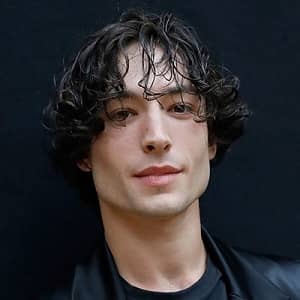 Ezra Miller is an American actor. After making his film debut in the 2008 drama, ‘Afterschool’, he has landed starring roles in ‘The Perks of Being a Wallflower’, ‘Fantastic Beasts’, etc. Moreover, he currently portrays the DCEU superhero character, ‘The Flash’, and has appeared in ‘Batman Vs Superman’, and ‘Justice League’.

How old is Ezra Miller?

Ezra Miller was born as Ezra Matthews Miller on September 30, 1992, in Wyckoff, New Jersey, the US. As of 2020, his age is 27. He was born to parents Marta Miller (father) and Robert S. Miller (father). His mother was a modern dancer whereas his father is a former senior vice president and managing director of Hyperion Books.

Miller is one of his parents’ three children and has two sisters named Saiya Miller and Caitlin Miller. During his childhood days, he suffered from a speech impediment and in order to overcome it, he took opera singing lessons. His ethnicity is Ashkenazi Jewish, German, Dutch.

Ezra Miller’s acting debut came in the 2008 movie, ‘Afterschool’ in which he portrayed the character of a teenage school student named ‘Robert’. His performance in the movie was received well by the critics and with time, he bagged more roles to his name.

In 2011, Ezra portrayed Elliot in ‘Another Happy Day’ for which he received the Hamptons International Film Festival for the Breakthrough Performer award.

The following year, Miller portrayed ‘Patrick’ in the American drama film’ The Perks of Being a Wallflower’ alongside Emma Watson and Logan Lerman. For his performance in the movie, he received the Boston Society of Film Critics Award for Best Supporting Actor award and the Hollywood Film Festival Spotlight Award.

In 2016, Ezra was cast in the role of DCEU superhero ‘The Flash/ Barry Allen’. As ‘The Flash’, he had small roles in ‘Batman v Superman: Dawn of Justice’ and ‘Suicide Squad’. His first major performance came in the 2017 movie, ‘Justice League’.

In 2017, he portrayed Credence Barebone in the Harry Potter spin-off, ‘Fantastic Beasts and Where to Find Them’. In 2018, he reprised the role in ‘Fantastic Beasts: The Crimes of Grindelwald’. He is set to appear as ‘The Flash’ in Zack Snyder’s Justice League (2021).

What is the Net Worth of Ezra Miller?

Ezra Miller has an estimated net worth of around $3 million as of 2020. He has earned a good amount of money from his acting career and his net worth is expected to rise in the coming years with more roles.

How tall is Ezra?

Miller stands at a height of 5 feet 11 inches and weighs around 72 kg. His hair color is black and he has a pair of dark brown eyes.

Is Ezra Miller dating anyone?

Ezra has identified himself as queer and has dated men and women. Currently, he seems to be single. In 2014, he started dating Erin Urb and the couple got engaged but later broke up.

Throughout the years, Miller has been involved in controversy. The police caught him with 20 grams of marijuana during the shooting of the film ‘The Perks of Being a Wallflower’. Although charges of drug possession were dropped, he had to pay a fine of $600 for two citations of disorderly conduct.

In 2020, Miller got involved in a major scandal. On April 5, 2020, a video was uploaded to Twitter which showed him choking a young woman and pushing her to the ground outside a bar in Reykjavík, Iceland.

The video shows a woman in a group of fans who are being ‘pushy’ approaching Miller with her hands waving in the air, to which he responded “Do you want to fight?” after which he ‘choked’ her. Whether it was a playful action or violent still remains under the shadow and Ezra is yet to speak out about this incident. However, some social media users have been quick to blast him for this behavior.

Our contents are created by fans, if you have any problems of Ezra Miller Net Worth, Salary, Relationship Status, Married Date, Age, Height, Ethnicity, Nationality, Weight, mail us at [email protected]