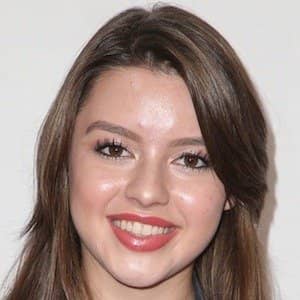 Fatima Ptacek is a famous American actress and model, and a human rights activist working with UN Women’s #HeForShe campaign for gender equality.

Additionally, she starred as Dora in Nickelodeon’s animated series Dora the Explorer since 2010. She has also made a respectable position in the American acting field at a young age.

Where is Fatima Ptacek from?

Fatima Ptacek was born on August 20, 2000, in New York City, New York. She holds an American nationality and mixed (Czech-Norwegian- Irish-  Ecuadorian) ethnicity, and is currently 20 years old. Her father is Jack Ptacek and mother Lucia Ptacek. She has three siblings, Jon Ptacek, Alex Ptacek, and also 1 elder brother whose name is unknown.

In the year 2010, she also noted that she was aiming for a scholarship to Harvard or Yale, and was enrolled in an academy for intellectually gifted children. That year, she also suggested she may be too old to act by that point. Simiary, in 2013, she was inducted into the National Junior Honor Society. Additionally, she was acknowledged by Assemblyman Francisco Moya on the floor of the Assembly and recognized for her contributions to the arts.

In addition, Ptacek has been studying Mandarin Chinese since childhood. Then, she started attending Stanford University in the year 2018. Moreover, she loves gymnastics so she has completed in the United States of America Gymnastics. Eventually, there were hopes of her being qualified for the Olympics. Aside from arts, she has also learned Mandarin Chinese(language) as well.

How did Fatima Ptacek rise to stardom?

Ptacek appeared in more than 70 television commercials, and also on the covers of numerous national magazines. Additionally,, she was also one of the few child models who has had the privilege of walking the runway at Bryant Park during the annual Fall Fashion Week in New York City.

She had also appeared as the “face of” Ralph Lauren and worked in major campaigns for high-end designers like Bonnie Young, Miss Sixty, Monna Lisa, and Siviglia, and fashion houses like Guess, The Gap, H&M, and Benetton.

Whereas, one of her most notable campaigns was for Macy’s in the year 2009, when she revived Natalie Wood’s childhood role of “Virginia” in Macy’s. She also appeared on the cover of Newsweek.

Likewise, in 2009, she was also cast in the comedy film The Rebound with Catherine Zeta-Jones. Also, she attended the Vanity Fair Oscar party with Christensen. Moreover, Fatima also volunteers as a “Celebrity Ambassador” for the Elizabeth Glaser Pediatric AIDS Foundation and has done work for the Make-A-Wish Foundation in conjunction with the Macy’s Believe Campaign, and the Morgan Stanley Children’s Hospital.

What is Fatima Ptacek’s Net Worth?

Fatima has an estimated net worth of around $1 million. Whereas, she was one of the highest-paid child models in the world, earning approximately $250,000 annually as of 2010.

Ptacek received the critical acclaim for her role in the Oscar-winning film Curfew. Whereas, the role as Dora earned her a “Best Young Actress – Television” at the 2012 Imagen Awards, which she attended.

How tall is Fatima Ptacek?

Is Fatima Ptacek dating anybody?

Fatima Ptacek is currently single. Previously, she was in a relationship with Regan Mizrahi since 2015. Unfortunately, Fatima was not happy in the relationship so they broke up. Currently, Fatima has managed to keep her personal information so secret that nothing relating to her present affairs status is out.

Our contents are created by fans, if you have any problems of Fatima Ptacek Net Worth, Salary, Relationship Status, Married Date, Age, Height, Ethnicity, Nationality, Weight, mail us at [email protected]