Granit Xhaka is a Swiss professional footballer who plays as a midfielder for Premier League club Arsenal and captains the Switzerland national team. 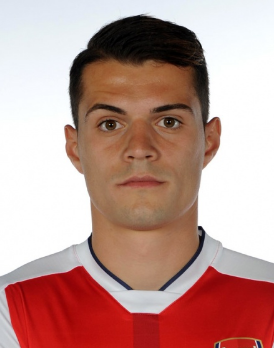 A Swiss international footballer who is currently playing for English club Arsenal as a midfielder is named for Granit Xhaka. Before landing at Arsenal, the enthusiastic player played for Borussia Monchengladbach and Basel. He is a member of Switzerland national team and has won 61 caps with nine goals. He was made the captain of Borussia Monchengladbach in 2015 at the age of 22, leading the team to UEFA Champions’ League qualification for a second successive season. He is included in Switzerland’s 23 man squad for the 2018 FIFA World Cup and is the main player of the team. Overall, he is a very talented footballer.

Arsenal midfielder Granit Xhaka has stated that the Arsenal squad is far more likely to be successful this season as their familiarity with Unai Emery grows. He spoke in a press conference and asserted that he and the Gunners are ready to start the season on the front foot, feeling far more comfortable and aware of their manager’s plans and style. He said “We know Unai now for one year. We know him, how he wants to play, the philosophy, the ideas…It is not easy if you have a new staff and to take the ideas so fast but now it is the second year, we know what we want, he knows us better than last season”. Does this follow? Arsenal’s mixed season, in which they reached the Europa League final and narrowly missed out on a? Champions League spot. He also went on to state the importance of starting the season as they mean to go on “What is important is to start very well, to take the three points in the Premier League. Last season we lost the first two games and this season it is important to start well”. Arsenal is currently on their pre-season tour in the United States of America, and have started incredibly successfully. The Gunners have already beaten Colorado Rapids, Bayern Munich, and Fiorentina, with a game against La Liga giants Real Madrid to come next.

His first game of the season is against Newcastle United on 11 August 2019.

Granit Zhaka was born on 27th September 1992 in Basel, Switzerland. He was raised up alongside his brother Taulant Xhaka by their Albanian parents: father, Ragip Xhaka, and mother, Elmaze Xhaka. His father, Ragip, was a student at the University of Pristina and at his 22, he participated in demonstrations against the Communist Yugoslavia rule in Kosovo which resulted in three and half year prison sentenced for him. In the year 1990, his family relocated to Switzerland from Podujevo of Pristina, before either was born. By nationality, Xhaka is a Swiss and Kosovar and his ethnicity is Mixed. His religion is Christian. As of 2018, he celebrated his 26th birthday.

Granit Xhaka is a very handsome footballer with a white skin tone and athletic body build. He has a very attractive personality with a charming smile on his lips attracting a lot of people towards him. He stands 6 feet 1 inch tall and he has a balanced weight of 82 Kg. His other body measurements have not been revealed yet but it will be added soon once we got information regarding his body details. Overall, he has got a healthy body.

The career of Granit Xhaka

Net Worth of Granit Xhaka

Granit Xhaka is a very successful and wealthy footballer with an estimated net worth of $15 million. As of 2019, he earns about £90,000 weekly wage from his current club, Arsenal which sums up to pocket him around £4,680,000 annually. His market value is recorded at £45 million. Overall, he is satisfied with his earning and he is living a luxurious lifestyle from his earnings.

Xhaka is a married person. He was married to Leonita Lekaj in July 2017. He met his miss perfect, Leonita Lekaj, when the handsome hunk was playing for Borussia Monchengladbach. The duo both belong to Kosovan-Albanian families. At euro 2016, Xhaka’s lady created a stir when she made her appearance in the stands. In 2017, the loved-up pair exchanged wedding vows with Leonita Lekaj. Their wedding ceremony was lavish and attended by their family, close friends, and some of the prominent faces from football word. As of today, the couple is living a happy life.

Our contents are created by fans, if you have any problems of Granit Xhaka Net Worth, Salary, Relationship Status, Married Date, Age, Height, Ethnicity, Nationality, Weight, mail us at [email protected]