Ismaïla Sarr is a Senegalese professional footballer who plays as a winger for Championship club Watford and the Senegal national team. 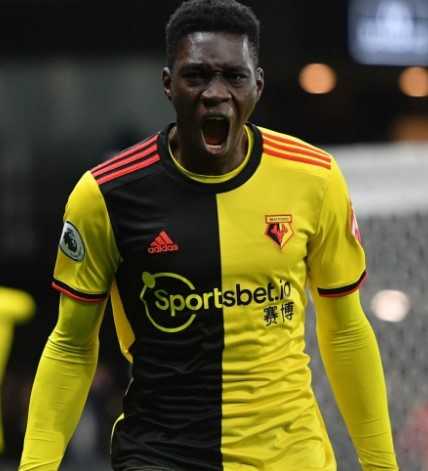 Ismaila Sarr is a Senegalese professional football player. He plays as a winger. He currently plays for the English club Watford. He started his youth football career from Generation Foot and embarked on his professional career from the French club, Metz.

He represented the Senegal youth team before making his senior international debut in 2017.

The Senegalese international has over 211k followers on his _sarr_18.

What is Ismaila Sarr Famous For?

Where was Ismaila Sarr Born?

Ismaila Sarr was born on 25 February 1998. His birth place is in Saint-Louis in Senegal. He holds Senegalese nationality. He belongs to African ethnicity. Information about his parents will be updated soon.

Sarr then signed with another French club, Stade Rennes in July 2017.

He signed a four-year contract for 17 or 20 million reported.

Sarr signed with the English club Watford in August 2019. He signed a 5-year contract with the club.

His transfer fee was a club record for Watford. It was reported at around 30 million pounds.

He scored his debut goal for the club against Coventry City in the EFL Cup on 27 August 2019.

Sarr excelled in his performance against Liverpool on 29 February 2020, where Watford defeated Liverpool 3-0.

Sarr scored 2 goals and assisted the other in their victory.

Liverpool suffered its first defeat in the 2019-20 season.

Sarr represented the Senegal U23 football team in 2015.

He was a part of the Senegal U23 team that finished fourth in the 2015 Africa U23 Cup of Nations.

He made his senior international debut in a 2017 Africa Cup of Nations qualification match against Namibia in September 2016. He made his debut replacing Sadio Mane.

Sarr scored his debut international goal on 8 January 2017 in a friendly match against Libya.

He was named in Senegal’s final squad for the 2018 FIFA World Cup in Russia.

He was one of the key players in the Senegal football team that reached the 2019 Africa Cup of Nations final. Senegal lost 0-1 to Algeria.

He suffered an ankle injury while on international duty in November 2019.

Who is Ismaila Sarr Dating?

Ismaila Sarr is unmarried. But he is not single. He is in a relationship. He has once shared his girlfriend picture on his Instagram. However, detail information about his personal life is not available at present. It will be updated soon.

How tall is Ismaila Sarr?

Ismaila Sarr stands at a height of 1.85 m i.e. 6 feet 1 inch tall. He has a body weight of 76 kg. He has an athletic body build. He has dark brown eyes and his hair color is black.

What is Ismaila Sarr Net Worth?

Ismaila Sarr earns from his career as a football player. His income comes from contracts, salaries, bonuses, and endorsements. His current club Watford signed him for a club-record fee, reported around 30 million pounds. His actual contract details have not been released. His annual salary is reported between 5 and 6 million pounds. His net worth will be updated soon.

Our contents are created by fans, if you have any problems of Ismaila Sarr Net Worth, Salary, Relationship Status, Married Date, Age, Height, Ethnicity, Nationality, Weight, mail us at [email protected]