Jennifer Lawrence is an American actress. 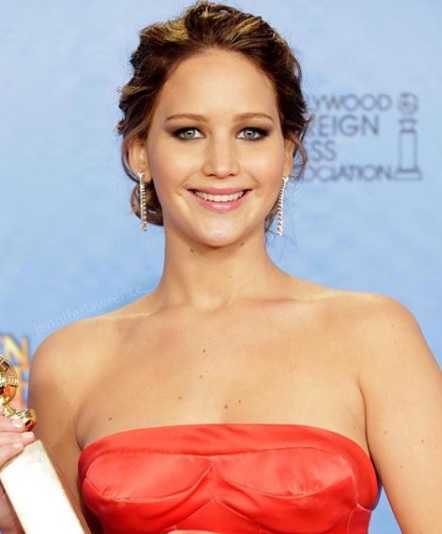 Jennifer Shrader Lawrence, popular by the name Jennifer Lawrence is an American actress. Starting her career in 2006, she became the highest paid actress in the world for two years in 2015 and 2016. The 2010 film Winter’s Bone was her breakthrough film and she earned recognition after starring as the mutant Mystique in X-Men series. She became one of the most popular actresses after she starred as Katniss Everdeen in the Hunger Games film series. Her success in the Hunger Games franchise made her the highest-grossing action heroine of all time. Her other most successful movies are Silver Linings Playbook, American Hustle, Joy, Passengers, and Red Sparrow.

Her upcoming projects are X-Men film, Dark Phoenix, It’s What I Do: A Photographer’s Life of Love and War and Bad Blood. She will also produce and star in the film adaptation of Hannah Kent’s novel, Burial Rites.

One of the most successful actresses in the world, Jennifer Lawrence, 28, has finally settled with Cooke Maroney, 33. He is the director of an art gallery of Gladstone 64. The Hunger Games star was reportedly seen with a massive ring oh her finger. They were spotted leaving a New York City restaurant.

The two previously started dating each other last summer in 2018.

Jennifer Lawrence was born on 15 August 1990. Her birth name is Jennifer Shrader Lawrence. She was born to a father, Gary Lawrence and a mother, Karen Lawrence. She belongs to white ethnicity. Her birth place is in Indian Hills, Kentucky in the United States. She holds American nationality. Her zodiac sign is Leo. She follows Christianity religion. Regarding siblings, she has two older brothers, Blaine and Ben Lawrence. While growing up, her mother did not allow her to play with other girls in preschool as she deemed her “too rough” with them. Her mother brought her up to be “tough” like her brothers.

She attended Kammerer Middle School in Louisville but did not receive a GED or a diploma as she dropped out of school at the age of 14. She was active in several school activities such as cheerleading, playing softball, field hockey, and basketball. Her father as a coach made her play basketball with boys. She was also fond of horseback riding. She has previously injured tailbone when she was being thrown from a horse. She often used to dress up as a clown or ballerina when her father worked from home.

She was 9 when she had her first acting assignment. She played the role of a prostitute in a church play. She was 14 when she was discovered by a talent scout on her family vacation to New York City. The scout arranged her to audition for talent agents. She signed with the CESD Talent Agency. She turned down several modeling assignments in order to focus on her acting career.

She made her acting debut in a minor role in the television film, Company Town in 2006.

She later appeared in minor roles in television shows, Cold Case and Medium.

She got a regular role in the American sitcom, The Bill Engvall Show, that aired from 2007 to 2009 for three seasons.

She made her film debut in the 2008 drama film, Garden party. She also appeared in small roles in The Poker House and The Burning Plain in 2008.

She then appeared in Like Crazy and The Beaver before getting a role in the X-Men series.

She landed the role of the mutant Mystique in the 2011 superhero film, X-Men: First Class. She portrayed the mutant role played by Rebecca Romijn in the series earlier films. The film became her career-highest-grossing film.

She later reprised the role of Mystique in the 2014 X-Men: Days of Future past and in the 2016 X-Men: Apocalypse.

One of her most successful characters is the role of Katniss Everdeen in The Hunger Games franchise.

She starred as Katniss Everdeen in 2012 The Hunger Games. The film’s business came out successful, as it became the top-grossing film featuring a female lead. She also became the highest-grossing action heroine of all time.

In 2012, she appeared as Tiffany Maxwell in Silver Linings Playbook. It was one of her successful movies which earned her praises and accolades.

She later appeared in the House at the End of the Street, The Devil You Know, American Hustle, and Serena. American Hustle is another successful movie in her career.

She will appear in her fourth X-Men film, Dark Phoenix in 2019. She and stand-up comedian, Amy Schumer have written a screenplay for a film. She will star in a memoir It’s What I Do: A Photographer’s Life of Love and War, Bad Blood. She will produce and star in the film adaptation of Hannah Kent’s novel, Burial Rites.

In 2009, she won a Young Artist Award for Outstanding Young Performer in a TV Series for her role as Lauren on the TBS sitcom, The Bill Engvall Show.

She won the Marcello Mastroianni Award for Best Emerging Actress for her role in the 2008 film, The Burning Plain at the Venice Film Festival.

Her breakthrough role in the 2010 Winter’s Bone earned her the National Board of Review Award for Breakthrough Performance. She also became the second youngest person to be nominated for the Academy Award for Best Actress.

In 2012, her role in Silver Linings Playbook won her the Golden Globe and Academy Award for Best Actress making her the second youngest Best Actress winner, at 22.

She has won seven MTV Movie Awards, five for The Hunger Games series, and two for Silver Linings Playbook.

She has also won six People’s Choice Awards, three for The Hunger Games series, and three for the X-men series.

She has won a Satellite Award for Silver Linings Playbook and a Saturn Award for The Hunger Games.

Her supporting role as Rosalyn Rosenfeld in the 2013 American comedy crime drama, American Hustle won her the Golden Globe and BAFTA Award for Best Supporting Actress.

Her role in the 2015 film, Joy earned her third Golden Globe Award. She also became the youngest person to accrue four Oscar nominations.

Her role in X-Men: Apocalypse earned her Favorite Movie Actress at the 43rd People’s Choice Awards.

The Hunger Games star is engaged. She got engaged to an art gallery director, Cooke Maroney. They got engaged in February 2019. They started their affairs in 2018.

Previously, she has dated several personalities in the entertainment industry. She dated X-Men co-star Nicholas Hoult from 2010 to 2014. She also dated director Darren Aronofsky from September 2016 to November 2017. She was also romantically linked with Graham Patrick Martin and Chris Maritn.

She has a pet cat named Shadow.

Our contents are created by fans, if you have any problems of Jennifer Lawrence Net Worth, Salary, Relationship Status, Married Date, Age, Height, Ethnicity, Nationality, Weight, mail us at [email protected]