Kaia Gerber is an American model and actress. 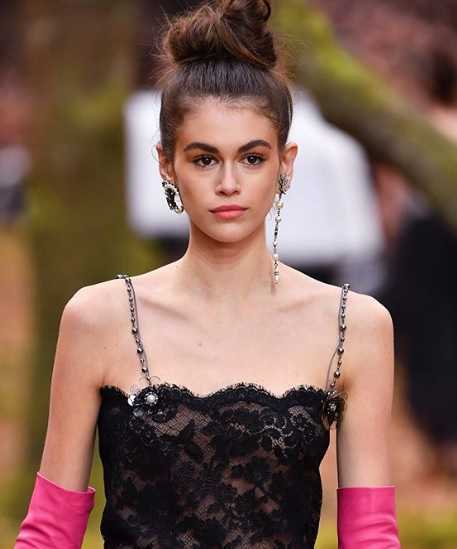 Kaia Jordan Gerber, professionally known by the name Kaia Gerber is an American model and actress. She is the daughter of popular entertainment industry businessman and former model, Rande Gerber, and model and actress, Cindy Crawford. She is signed with DNA Model Management. She was awarded Model of the Year at The Fashion Awards in 2018. She has over 4.2 million followers on her Instagram.

The rumors about 17 years old model, Kaia Gerber dating fellow model Wellington Grant is getting stronger after they were seen together on several occasions. This Monday, the two were spotted holding hands in downtown NYC ahead of Fashion Week.

The rumors of the two dating sparked when they were spotted together earlier on Valentine’s Day. They were seen leaving the Mercer hotel on 14 February this year.

The daughter of a supermodel, Cindy Crawford has already established herself in the modeling industry at a very young age. Her fans must be excited to learn the rumors of her dating someone.

Why is Kaia Gerber famous?

Who is Kaia Gerber’s mom?

Kaia Gerber was born on 3 September 2001. Her birth name is Kaia Jordan Gerber. She is of German, English, French, and Danish descent on her mother’s side, whereas his father is of Russian descent on her father’s side. Her birthplace is in the United States. She holds American nationality. Her zodiac sign is Virgo. Her father is Jewish. She has an older brother, Presley Gerber. She takes online classes at Malibu High School.

Is Cindy Crawford’s daughter a model?

Kaia Gerber landed her first modeling gig when she was only 10 years old. She modeled with Young Versace, Versace’s junior line.

She has later modeled for various magazines including Vogue, Teen Vogue, and Pop Magazine.

She made her runway debut for Raf Simons’ Calvin Klein Collection in 2017.

In 2018, she landed her first solo Vogue cover on the February 2018 issue of Vogue Paris.

In 2018, she appeared for Versace, Calvin Kelin, Marc Jacobs, and Omega in Spring campaigns.

In 2018, she led the campaign for Marc Jacobs Daisy fragrance.

In 2018, she collaborated with designer Karl Lagerfeld to create the KarlxKaia collection. It was her first collection.

She was previously signed with IMG Models.

She made her acting debut in an American television film, Sister Cities in 2016.

Who is Kaia Gerber’s New Boyfriend?

Kaia Gerber is reportedly dating Jacob Elordi. It is just a rumor that sparked after she was seen together with Elordi on 1 September 2020. The two were spotted together having dinner in Nobu in Malibu. However, it is yet to confirm whether the two are really dating or not. She was previously in a relationship with fellow model Wellington Grant. The rumors sparked after they were seen together on several occasions. They were spotted together on Valentine’s Day in 2019. However, neither of them confirmed their affair.

She was previously linked with Jordan Barett. She was rumored to be dating him after they were seen partying together. Neither of them confirmed their relationship.

How old is Kaia Gerber?

What is Kaia Gerber net worth?

As a model, she has modeled for various top brands such as Versace, Calvin Klein, Vogue, Omega, Marc Jacobs, Alexander Wang, Prada, Chanel, Coach, Moschino, and Burberry. She has already established herself in the modeling industry. She has earned her fortune working in the industry. Her net worth as of 2019 is under evaluation. However, she is the daughter of Rande Gerber, whose net worth is estimated at $500 million, and Cindy Crawford, whose net worth is estimated at $100 million.

Our contents are created by fans, if you have any problems of Kaia Gerber Net Worth, Salary, Relationship Status, Married Date, Age, Height, Ethnicity, Nationality, Weight, mail us at [email protected]