Kathy Griffin is a popular American comedian and actress 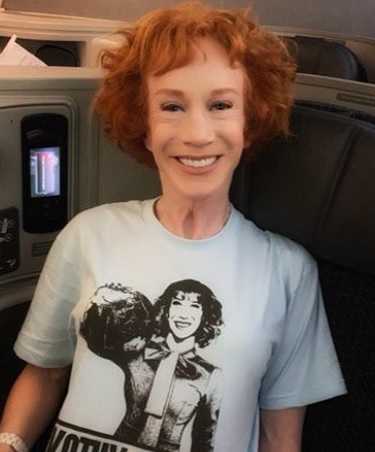 Kathy Griffin is a popular American comedian and actress. She has starred in several comedy specials for cable TV and has released six comedy albums to date. The 58-years old comedian rose to prominence after she appeared in a supporting role in the NBC sitcom Suddenly Susan from 1996 to 2000.

Her Bravo reality show, Kathy Griffin: My Life on the D-List won her two Primetime Emmy Awards for Outstanding Reality Program, Gracie Awards, several more nominations. She earned 6 Grammy nominations and won one for her comedy album, Calm Down Gurrl in 2013.

She holds the Guinness World record for the number of aired TV specials on any network, by any comedian in the history of comedy, as she has recorded 16 television specials at Bravo.

She wrote, “The first two years I appeared on CNN, it didn’t even occur to me to ask for a salary. The 8th year when I asked Jeff Zucker for a raise, he was so angry he docked me 30%. I’m sorry to say I took the pay cut because I truly enjoyed making you all laugh.”

Kathy Griffin was born on 4 November 1960. Her birth name is Kathleen Mary Griffin. She was born to John Patrick Griffin and Mary Margaret “Maggie” Griffin in the Chicago suburb of Oak Park, Illinois in the United States. She holds an American nationality. She belongs to a white ethnicity.  Her horoscope is Scorpio. She has four siblings, Kenny, Joyce, Gary, and John. Her sister Joyce died in 2017 and her brother Gary died in 2014. Regarding her schooling, she attended St. Bernadine’s Elementary School. She then attended Oak Park and River Forest High School. She then studied drama at Lee Strasberg Theatre and Film Institute in Los Angeles.

The career of Kathy Griffin

After studying drama at the Lee Strasberg Theatre and Film Institute, she became a member of the improvisational comedy troupe The Groundlings in the early 1980s.

She began performing stand-up comedy with The Groundlings.

Later. she appeared at Un-Cabaret and ran her own standup night, Hot Cup of Talk with Janeane Garofalo, which later became the title of her 1998 solo HBO special.

She made her film debut in the 1994 film, Pulp Fiction as a pedestrian coming to the aid of Marcellus Wallace (Ving Rhames).

She earned wider recognition after she starred in the NBC sitcom Suddenly Susan in 1996.

She won the 2003 edition of Celebrity Mole and identifies her victory as the moment she became a “D-List” celebrity.

Her Bravo reality show, Kathy Griffin: My Life on the D-List from 2005 to 2010 earned her several awards and nominations including two Primetime Emmys and one Gracie Award.

She has also appeared as a guest judge in RuPaul’s Drag Race, The Marriage Ref, and America’s Next Top Model.

She has voiced in films including A Turtle’s Tale: Sammy’s Adventures, Shrek Forever After, Dinotopia: Quest for the Ruby Sunstone, and Lion of Oz.

She also starred in documentary films including Joan Rivers’s” A Piece of Work, Heckler, Mr. Warmth: The Don Rickles Project, In Search of Puppy Love, and Judy Toll: The Funniest Woman You’ve Never Heard of.

All of her albums were nominated for Grammy Awards for Best Comedy Album. Her sixth comedy album, Calm Down Gurrl won her a Grammy.

She went on a worldwide comedy tour, “Laugh Your Head Off” between 2017 and 2018. She performed in Singapore, Germany, Australia, the United Kingdom, Sweden, Canada, and several other European and Asian countries.

She is unmarried at the moment. Previously, she was married to Matt Moline. They got married on 18 February 2001 at the 360 Degree Restaurant in Hollywood. The marriage ended and their divorce was finalized in May 2006. After their divorce, she was involved in romantic affairs with Steve Wozniak, Levi Johnston, Tom Vize, and Isaiah Mustafa. All of her affairs ended at some point. She last dated marketing executive Randy Bick from 2012 to 2018.

Kathy Griffin stands at a height of 1.63 m i.e. 5 feet and 4 inches tall. She has an average height. She has a bodyweight of 121 lbs i.e. 55 kg. She has a slim body build. She has green eyes and her hair color is dark brown.

Net Worth of Kathy Griffin

As of 2018, the net worth of a 58-years old comedian is estimated at around $20 million. She has earned her fortune by appearing on several television shows and films.

Our contents are created by fans, if you have any problems of Kathy Griffin Net Worth, Salary, Relationship Status, Married Date, Age, Height, Ethnicity, Nationality, Weight, mail us at [email protected]