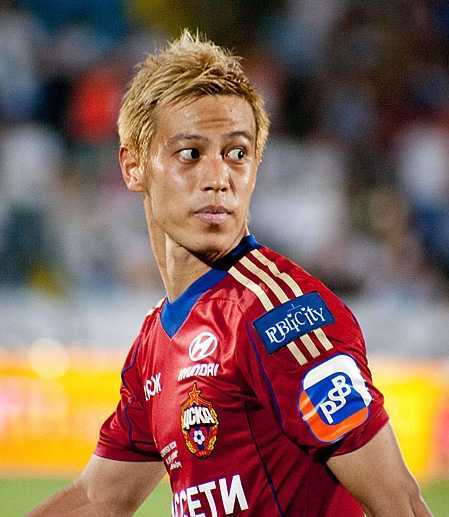 Keisuke Honda is a Japanese professional football player who plays as an attacking midfielder for the Australian club Melbourne Victory. He is also the general manager and coach of the Cambodian national football team. He started his youth career at Settsu FC in 1994 and played professional football for VVV-Venlo in the Netherlands, CSKA Moscow in Russia, AC Milan in Italy, and Pachuca in Mexico.

Initially, he represented Japan at different age levels before making a senior team debut in 2008. He has played in the 2005 ‘FIFA World Youth Championship,’ in two ‘FIFA World Cups,’ and in two ‘AFC Asian Cups’ as part of the Japanese national football team. He is the recipient of the 2010 Japanese Footballer of the Year, 2011 AFC Asian Cup Most Valuable Player, and 2013 Asian Golden Ball Award. He helped his country to win the AFC Asian Cup in 2011. Following an exit from the 2018 FIFA World Cup, Honda has announced his plan to retire from international football, where he has scored 37 international goals earning 98 caps in total.

Honda was named the most valuable player of the 2011 AFC Asian Cup.

He was given a nickname, Emperor Keisuke.

Keisuke Honda was born on 13 June 1986 in Settsu, Osaka, Japan. His birth sign is Gemini and holds Japanese nationality. He was so much fascinated by football since he was a child. Being raised in Osaka, he had belonged to the local junior youth team at Gamba Osaka. However, he was not capable to be promoted to the youth team.

After finishing graduation from Seiryo High School, Honda started his professional career at the age of 22, with J1 League side Nagoya Grampus in 2004. Before, he struggled a lot to get a chance to play for such clubs.

In January 2008, Netherlander club VVV-Venlo signed Honda on a two and half-year deal. The club relegated during his first season at the club. Honda helped his team to get back into the league and was given the nickname Keizer Keisuke by his fans, meaning Emperor Keisuke.

In December 2009, Russian club CKSA Moscow signed Honda on a four year deal for an undisclosed fee reported to be around 6 million Euro. Honda became the first Japanese player to reach the quarter-finals in the UEFA Champions League in 2010 defeating Spanish club Sevilla.

In January 2014, Italian club AC Milan signed free agent Honda where he played for three years as per his contract.

In July 2017, the Mexican club Pachuca signed Honda. Honda played at Pachuca for a year.

In August 2018, Australian club Melbourne Victory signed Honda to play in the A-League.

As of 2018, Honda has also taken the managerial duty to coach the Cambodian national team.

Keisuke Honda made his senior international debut for Japan in 2008. Honda has represented the Japan national team in 2010, 2014, and 2018 FIFA World Cups. Japan achieved its first World Cup win on foreign soil when Honda scored a free-kick and helped his team to win 1-0 against Cameroon in the 2010 FIFA World Cup. Honda was a key player of the Japan national team that won the 2011 AFC Asian Cup, where he was named the most valuable player in the competition. Honda became the first Asian player to score in three World Cups. He is also the top-scoring Asian player in World Cup history. Following the 2018 FIFA World Cup exit, Honda has announced his plan to retire from international football.

Honda is married to Misako. She works as a kindergarten teacher. They got married in 2008 and the couple is blessed with a son. Honda belongs to a family where most of the members are involved in sports. His older brother, Hiroyuki Honda was also a footballer. His uncle Daisaburo was a canoeist who represented Japan in the 1964 Tokyo Olympics. He also has a cousin who is well popular as an Olympic wrestler.

Keisuke Honda stands 1.82m i.e six feet tall. He has a weight of 74kg. The 32-year old midfielder is still active in football and has maintained his body perfectly fit.

Keisuke Honda earns an enormous amount of salary and has successfully maintained his net worth, which we could witness in accordance with his standard of living. He has a salary estimated at around 2.75 million Euro. According to the reports in April 2018, his market value is considered to be around €400 million. However, his market value reached the highest price reported to be around €2000 million as of 2013. In 2009, Russian club CKSA Moscow signed Honda on a four year deal for an undisclosed fee reported to be around 6 million Euro. His net worth for this year is still under review. He has also got a red Ferrari which cost around $315k which is very expensive. He has managed a luxurious living standard.

Our contents are created by fans, if you have any problems of Keisuke Honda Net Worth, Salary, Relationship Status, Married Date, Age, Height, Ethnicity, Nationality, Weight, mail us at [email protected]