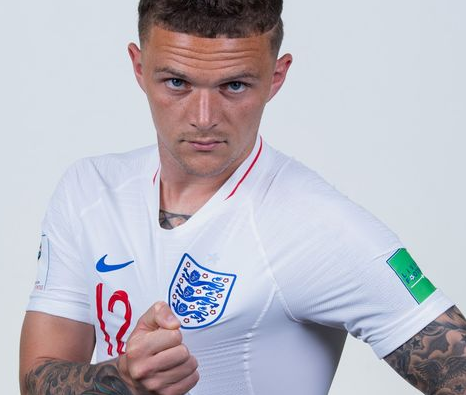 He represented England football teams at various age levels before making his senior international debut in 2017.

What is Kieran Trippier Famous For?

Where is Kieran Trippier From?

Kieran Trippier was born on 19 September 1990. His birth name is Kieran John Trippier. His birthplace is in Bury in England. He holds an English nationality. He was born to a father, Chris Trippier, and a mother, Eleanor Lomax. He has 3 siblings: 3 brothers, Chris, Curtis, and Kelvin. Trippier grew up in Summerseat in Ramsbottom, Greater Manchester. His brother Kelvin also plays professional football.

Regarding his educational background, he attended Holcombe Brook Primary School and Woodhey High School. He helped his football team to win one Greater Manchester Trophy and two Bury Cups.

Though Manchester United scouted Trippier when he was 8, he chose to join Manchester City’s academy as he had few friends there and it was local for him.

At the age of nine, Trippier joined Manchester City’s academy in 1999. He progressed through the ranks at the club. He signed his first professional contract in 2007. In the 2007-2008 seasons, he became regular in the team and was part of a team that won the FA Youth club, his first club title. He made Manchester City’s first during the club’s pre-season tour of the United States in 2010.

Manchester City loaned Trippier to the Championship club Barnsley on a one-month loan in February 2010. He made his Barnsley debut in a 2-1 defeat to Middlesbrough. He made three appearances during his first loan spell at Barnsley. His loan was cut off after he had an injury but he again rejoined Barnsley on a six-month deal. He made his second Barnsley debut in a 1-0 defeat to Rochdale in the League Cup. He agreed to stay in the club for the 2010-2011 seasons. Trippier scored his career-first senior professional goal against Leeds United in February 2011. He made forty-one appearances in all competitions. He also won the Young Player of the year award.

Manchester City then loaned Trippier to another Championship club, Burnley in July 2011 on a season-long loan. He made his Burnley debut in August 2011 against Watford. He scored his first Burnley goal in September 2011 against Milton Keynes Dons in the League Cup. He scored his first league goal for Burnley in December 2011 against Brighton & Hove Albion. He was also nominated for the Championship Player of the Month award in December 2011. Trippier received his career-first professional red card on 2 January 2012 while playing against Leeds United. He was signed permanently by Burnley for an undisclosed fee. He played in all 46 league games in the first season and was named the Burnley Player of the Year. He was also named in the Championship PFA Team of the Year for 2012-2013. He was again named in the Championship PFA Team of the Year for consecutive seasons. He was a key player in the Burnley team that earned a promotion to the Premier League for the 2014-15 season. Trippier renewed his contract with the club after signing a new improved 3-year contract until 2017.

Trippier transferred to English club Tottenham Hostpur reportedly for 3.5 million pounds in June 2015. He appeared in six games for Tottenham during his first Premier League season. He made his Championship League debut on 27 September 2016 in a group stage match against CSKA Moscow on 27 September 2016. Trippier signed a 5-year contract extension with the club in June 2017. Trippier became a regular after Kyle Walker left the club to join Manchester City. Trippier’s performance in the UEFA Championship League home win against Real Madrid on 1 November 2017 impressed the club and its fans. Trippier suffered a series of minor injuries during the 2018-19 season that affected his performance throughout the season. Before leaving Tottenham Hotspur, he made 114 appearances for the club in all competitions.

Trippier transferred to Spanish club Atletico Madrid after signing a 3-year contract worth 20 million-plus add-ons on 17 July 2019. With the transfer, he became the club’s first English player in 95 years. Trippier made his La Liga debut against Getafe on 18 August 2019. He assisted a goal for Alvaro Morata in his debut game.

Trippier was called up to the senior team for the first time in May 2017 for the 2018 World Cup qualifier. He made his senior team debut in a 2018 World Cup qualifier against France on 13 June 2017. He was also named in the 23-man squad England national team squad for the 2018 FIFA World Cup. Trippier scored his debut international goal against Croatia on 11 July 2018. Trippier was ranked the most creative player in the tournament. He is often compared with legendary English footballer David Beckham for his crosses and dead-ball delivery on set pieces.

Who is Kieran Trippier Married to?

Kieran Trippier is a married man. He is married to Charlotte. The couple got married in June 2016. The couple is blessed with two children. Their first child, a son, Jacob was born in December 2016.

He has over 693k followers on his Instagram @ktrippier2.

How Tall is Kieran Trippier?

Kieran Tripper stands at a height of 1.78 m. He has a bodyweight of 71 kg. He has an athletic body build. He has blue eyes and his hair color is dark brown. He has several tattoos on his body.

What is Kieran Trippier Net Worth?

Kieran Trippier earns from his professional football career. His income comes from contracts, salary, bonuses, and endorsements. He joined the Spanish club Atletico Madrid for 20 million pounds in 2019. He had joined Tottenham Hotspur reportedly for 3.5 million pounds in 2015. He has an endorsement deal with Nike. His net worth is estimated at $7 million.

Our contents are created by fans, if you have any problems of Kieran Trippier Net Worth, Salary, Relationship Status, Married Date, Age, Height, Ethnicity, Nationality, Weight, mail us at [email protected]