Kristen Anne Bell is an American actress, singer, and producer. 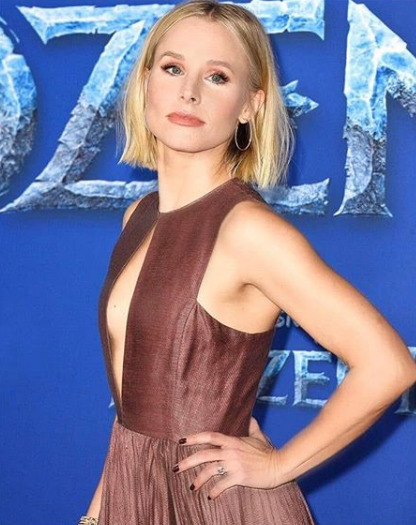 Kristen Bell is an American actress and singer who is best known for her appearance as Veronica Mars on television series, “Veronica Mars”. Bell has marked her prominence presence in the entertainment world through her several roles in several movies and television series. Bell had her breakout film role as Sarah Marshall in popular film, “Forgetting Sarah Marshall”(2008). Bell further garnered more recognition through her voice role in several films including “Frozen”(2013), “Ralph Breaks the Internet”(2018) and the upcoming “Frozen 2″(2019). Bell has also voted the fourth-sexiest woman on TV at Wizard magazine.

What is Kristen Bell Famous for?

Where is Kristen Bell From?

Kristen Bell was born on July 18, 1980, in Huntington Woods, Michigan, United States. Her birth name is Kristen Anne Bell. Her nationality is American. Bell belongs to  Irish American ethnicity while Cancer is her zodiac sign.

Kristen Bell was born in a well-to-do family to Tom Bell(father) and Lorelei Bell(mother). Her father, Tom of German, Scottish and Irish ancestry is a television news director at Las Vegas, Nevada while her mother, Lorelei of Polish descent is a registered nurse. Her parents however divorced when she was just 2 years.

Bell began acting at an early age as she appeared in productions of “Fiddler on the Roof” at age of 15. She even had used her middle name, Anne during her high school after which her parents decided to move her to private school. Later then she attended Shrine Catholic High School where she became more interested in the drama and music club.

She graduated from the school in 1998 winning the title of school yearbook’s “Best Looking Girl” with the majority vote by her senior class. After graduating from high school, she moved to New York City and joined New York University’s Tisch School of the Arts to major in musical theater.

However, during her senior year, in 2001, she drops out to appear in the Broadway musical version of “The Adventures of Tom Sawyer”. Later the year in 2002, she appeared in the Broadway revival of “The Crucible”.

Who is Kristen Bell Married to?

The 39 years old beautiful actress, Kristen Bell is a married woman. Bell is currently married to her loving husband, Dax Shephard”. Shephard is also a well known American actor. The couple began dating since late 2007 after Bell’s five-year-long relationship was ended. Bell was previously engaged to her former fiance, Kevin Mann. However, in 2007, Bell ended the five-year-long relation because of some problems.

Shephard and Bell fell in deep love and after dating for 3 years, the couple got engaged in January 2010. The couple together starred in the film “When in Rome”(2010), “Hit and Run”(2012) and “CHiPs”(2017). After the Defense of Marriage Act of legalizing same-sex marriage was ruled by the Supreme Court on June 26, 2013, Bell asked to marry him. Later on October 16, 2013, the couple got married at the Beverly Hills County Clerk’s Office.

The couple is blessed with two children: daughters Lincoln Bell Shepard(b. 2013) and Delta Bell Shephard(b. 2014). Currently, Bell is living a happy life with her husband and children.

What is the Net Worth of Kristen Bell?

Kristen Bell has been one of the most talented actresses in the industry as she has been in this field now for more than 25 years. Bell has managed to amass a fortune worth million dollars through her appearance in several films and series. Her current estimated net worth is about $20 million.

She also makes a few dollars more from advertisement deals with Neutrogena and Cover Girl Cosmetics and through a company “Hello Bello” founded by her husband and herself. Bell also has a fashion line named “Kristen Bell Seduction”. Through her Instagram, she earns $35k per sponsored post.

Bell lives in a mansion worth $4.3 million in Los Feliz, Los Angeles with her family. She has car collection which includes Lincoln Continental, Lamborghini Aventador, Toyota Tacoma, Porsche Cayenne, Lamborghini Murcielago Roadster. With the fortune worth million dollars, she is living a lavish and luxurious lifestyle.

How Tall is Kristen Bell?

The gorgeous lady, Kristen Bell has a well maintained slim body physique. Bell has a fair complexion with sparkling blue eyes and shinning blond hair. She stands tall with a height of 5ft. 1inches.(1.55m) while her body weighs around 48 kg.

Our contents are created by fans, if you have any problems of Kristen Bell Net Worth, Salary, Relationship Status, Married Date, Age, Height, Ethnicity, Nationality, Weight, mail us at [email protected]