Kyler Murray is an American collegiate football and baseball player. 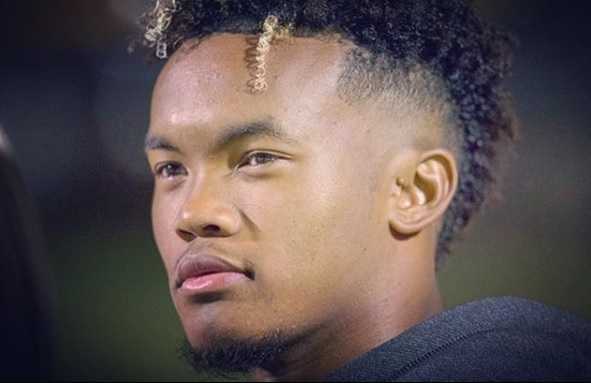 Kyler Murray is an American collegiate football and baseball player. He is considered as one of the future rising stars. He plays for the Oklahoma Sooners. Previously, Murray played as an outfielder for the Oklahoma Sooners baseball team. He also played college football for the Texas A&M Aggies. He was drafted with the ninth overall selection in the 2018 MLB draft by the Oakland Athletics. He will still play his final college football season with Oklahoma in 2018 and join Athletics spring training in 2019. The 21-year old Murray was named Gatorade Football Player of the Year in 2014.

Oklahoma Sooners quarterback Kyler Murray came on in as a substitute and went on fire against Baylor on Saturday when he went 17-of-21 with 432 passing yards and six touchdowns plus one touchdown on the ground, total seven touchdowns. He finished 10 carries for 45 yards. Sooners won 66-33 over Baylor. According to ESPN Stats & Info, Murray also became the first Big 12 quarterback with at least six passing touchdowns and one rushing touchdown on Saturday since Texas Tech’s Graham Harell in 2012, which he achieved against Baylor on Saturday. Murray also presented himself as one of the strong contenders for the Heisman Trophy.

Murray did not start for the Sooners due to the disciplinary issue. A day before the match, Murray arrived late for training on Friday. For which, he was benched, and backup QB Austin Kendall got a chance to debut his first start as quarterback.

Kyler Murray was born to a father Kevin Murray and a mother Missy Murray on 7 August 1997 in Bedford, Texas, United States. His nationality is American. Murray attended Allen High School in Allen, Texas. He started playing football and baseball there.

Murray played football at Allen High School. His team went on winning 43 games in a row and won three straight state championships. Murray missed only one start during this 43 games winning streak. He finished his career with a perfect 42-0 record as a starting quarterback. As a senior, Murray was named the Gatorade Football Player of the Year in 2014. ESPN, Scout.com, and 247Sports ranked Murray as a five-star recruit and also the best dual-threat quarterback in his class. Murray also played baseball in high school. He was a shortstop and a second baseman there. Murray officially signed Texas A&M University to play college football and college baseball in May 2014.

Texas A&M: In 2015, Murray initially competed with Kyle Allen before the season for the position of starting quarterback. Allen won the starting position at first. However, the team suffered two straight losses in October, Murray was given the starting quarterback position. Murray, in his first start, became the only SEC quarterbacks along with Cam Newton in the past 20 years to gain over 100 yards passing and rushing, including a passing touchdown and a rushing touchdown in their first career start. Murray threw for 223 yards and rushed for 156 yards with a passing touchdown and a rushing touchdown.
Murray announced in December 2015 that he will move to University of Oklahoma, but will have to stay out the 2016 season per NCAA transfer rules.

Oklahoma: Murray made his debut for the Oklahoma Sooners football team in the 2017 season opener against UTEP. Murray was a backup quarterback to Baker Mayfield, came into the game in the second half and finished 10-of-11 for 149 yards and a touchdown.
Mayfield sat out of some of the game due to disciplinary actions in the previous game against Kansas, Murray got the start against West Virginia on 25 November 2017. He hit both pass attempts for 52 total yards and a touchdown. He contributed 80 rushing yards on three carries.

In 2017, Murray also played for the Oklahoma Sooners baseball team as a left fielder. He scored 122 batting average and six runs batted in (RBIs) in 27 games. The following year, Murray played as a centerfielder and batted with 296 with 10 home runs, 47 RBIs, and 10 stolen bases.
The Oakland Athletics selected Murray with the ninth overall selection of the 2018 MLB draft. He signed a contract with the Athletics. According to the contract, Murray will receive $4.66 million signing bonus. Murray will play one more season of football at Athletics and report to spring training in 2019 to pursue his professional baseball career.

Kyler Murray’s parents and relatives were also a football or baseball player. His father, Kevin Murray was a quarterback at Texas A&M from 1983 to 1986. Murray’s uncle, Calvin, is also a former professional baseball player who played for the San Francisco Giants, Texas Rangers, and Chicago Cubs. No information about his love life is made public till date. There are no rumors following his relationship issues.

Kyler Murray is 5 feet and 11 inches tall, whereas he weighs 88 kg. Murray has athletic body build as he is a sports player.

Kyler Murray, who currently plays as Oklahoma football team has an annual income of $1 million. His net worth is estimated at $3 million as of 2018. The rising star has been phenomenal this year, which surely will grow his net worth at a strong pace in the coming years. He has luxury cars including Range Rover and Ford.

Our contents are created by fans, if you have any problems of Kyler Murray Net Worth, Salary, Relationship Status, Married Date, Age, Height, Ethnicity, Nationality, Weight, mail us at [email protected]