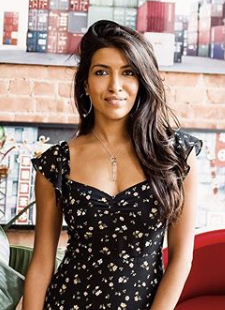 Leila Janah was the Founder and CEO of Samasource and LXMI, two companies that share a common social mission to end global poverty by giving work to people in need. She was also the author of giving Work: Reversing Poverty One Job at a Time and co-author of America’s Moment: Creating Opportunity in the Connected Age, a book by Rework America: A Markle Initiative. Let’s know more about her through this article.

What is Leila Janah famous for?

The Founder and CEO of Samasource and LXMI.

Where was Leila Janah from?

Recalling her early life, Leila was born in Lewiston, New York, near Niagara Falls and grew up in San Pedro, Los Angeles, California. She was the daughter of Indian immigrants, who came to the United States with nothing. She described her childhood as being difficult, often due to a lack of financial security. As a teenager, she worked many jobs, including babysitting and tutoring.

Where did Leila Janah go for education?

Concerning her education, Leila attended the California Academy of Mathematics and Science. Later, She attended Harvard University, graduating in 2005 with a degree in African Development Studies.

How Leila Janah become a businesswoman?

Upon graduation, She worked as a management consultant with Katzenbach Partners, focusing on healthcare, mobile and outsourcing companies. One of Janah’s first assignments with Katzenbach Partners was managing a call center in Mumbai. She has cited this experience as sparking the inspiration for Samasource, the non-profit she founded in 2008.

In 2013, She founded Samaschool, a program that moves people out of poverty by providing digital skills training and a connection to internet-based jobs that pay a living wage. Samaschool runs in-person programs in Arkansas, California, New York, and Kenya, and also provides online classes that are available internationally. Samaschool courses train students in digital literacy, workforce readiness, and portfolio building.

In 2015, She co-founded LXMI, a for-profit luxury skincare brand. Built on the idea of beauty in action™, LXMI employs marginalized women in the rural Nile Valley communities to harvest LXMI ingredients and reports that their producers earn 3x the average local wages. LXMI is named after the Hindu goddess of beauty and prosperity.

What were the achievements of Leila Janah?

Talking about her achievement, Leila was a Young Global Leader of the World Economic Forum, a Director of CARE USA, a 2012 TechFellow, recipient of the inaugural Club de Madrid Young Leadership Award, and the youngest person to win a Heinz Award in 2014 when she received the 19th Annual Heinz Award in Technology, the Economy and Employment.

She was included as one of Elle Magazine’s “Women in Tech” in 2016 and The New York Times T Magazine’s Five Visionary Tech Entrepreneurs Who Are Changing the World in 2015.

Who was Leila Janah married to?

Reflecting on her personal life, Leila was married to the vice president of the global solution, Tassilo Festetics. Together, the couple produces a kid until her death. Unfortunately, she passed away on 24th January 2020 which separated the happy couple forever.

What is the reason behind Leila Janah death?

Leila Janah, a serial entrepreneur who was the CEO and founder of machine learning training data company Samasource, passed away at the age of 37 due to complications from Epithelioid Sarcoma, a form of cancer, according to a statement from the company.

How much is Leila Janah worth?

Being the Founder and CEO of Samasource and LXMI, Leila must earn an impressive amount of money and fame through her profession as a businesswoman. Based on some online reports, her estimated net worth and salary is yet to be disclosed. In the case of disclosed, we will let you know.

How tall was Leila Janah?

Before her death, Leila has a decent height and weight with black hair and brown eyes. Her other body information is yet to be disclosed. In the case of disclosed, we will let you know.

Our contents are created by fans, if you have any problems of Leila Janah Net Worth, Salary, Relationship Status, Married Date, Age, Height, Ethnicity, Nationality, Weight, mail us at [email protected]