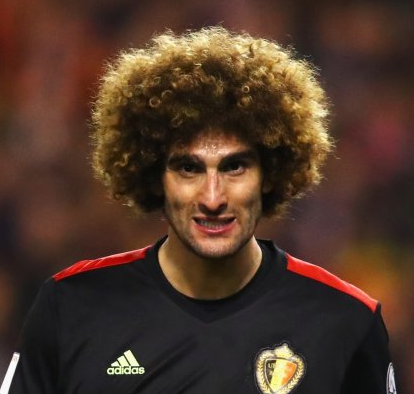 Marouane Fellaini-Bakkioui is popularly known as Marouane Fellaini who is a professional Belgian football player. He plays for England football club which is popularly known as Manchester United Football Club and Belgium national team. His playing position is Midfielder. His shirt number is 27. His nickname is Giraffro. Adnan Januzaj and Fellainiar best friends. He is an amazing and brilliant football player.

Marouane was born on 22nd November 1987. His birthplace is Etterbeek, Brussels, Belgium. His parents are Abdellatif Fellaini who is a goalkeeper of Raja Casablanca and his mother’s name is Hafida Fellaini. He has two brothers Mansour Fellaini and Hamza Fellaini. His zodiac sign is Sagittarius. His nationality is Belgium.

Fellaini began his professional football career in 2006 at the age of 19 in Standard Liege. He won the Belgium first division with his team and awards as the league’s best player.  He made 84 times appearance in two seasons and scored 11 goals. After the end of the season, Fellaini moved to Everton in September 2008 and made his debut against Stoke City on 14th September 2008. On 5th October 2008, he scored his first goal in a match against Newcastle United. In the 2008-09 season, he scored 9 goals for the club. He appears in 141 games and scored 25 goals in five successive seasons.

Later on, he moved to Manchester City on 2nd September 2013. He made his official club debut on 14th September 2013 in a match against Crystal Palace. On 20th October 2014, he scored his first competitive goal against West Bromwich Albion under the new management of Louis Van Gaal. He made an improvement in his stat than the previous season.

Marouane has played from the Belgium national team. He scored his first national goal against Portugal in UEFA Euro 2008 qualification match. He made his seven appearances in Belgium’s 2014 World Cup qualification campaign. On 4th June 2014, Marouane is selected as a part of Belgium’s 23-man squad for the 2014 FIFA World Cup. On 17th June 2014, the match against Algeria Fellaini came as on second-half Substitute. He was named in the starting line-up against Russia on 22nd June 2014. Belgium was defeated by Argentina in Brazil in the quarter-final.

During qualification for UEFA Euro Cup 206, Fellaini scored two goals against Cyprus which makes the team victory. After that, they again won against Israel. On 7th June 2015, he scored two opening goals against France at the State De France. He scored his sixth goal in four international appearances against Bosnia and Herzegovina.

In the 2018 World Cup, Fellaini scored a goal that makes an equalizing goal against Japan in a round of 16.

Fellaini is unmarried but he was in love with Lara Binet. His height is 6 feet 4 inch and his weight is 85 kg. His net worth is $20 million and his salary is $9 million. His earning sources are national team, club deals, sponsorship deals, and business. His car collections are Audi-A7 and ML-SUV Mercedes.

Our contents are created by fans, if you have any problems of Marouane Fellaini Net Worth, Salary, Relationship Status, Married Date, Age, Height, Ethnicity, Nationality, Weight, mail us at [email protected]