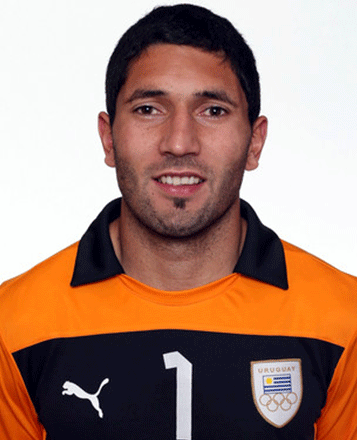 Martin Campana is an Uruguayan footballer who plays as a goalkeeper for an Argentine club, Independiente, and also represents his Uruguayan national football team. His jersey number is 25.

Martin Campana’s full name is Martin Nicolas Campana Delgado who was born on 29 May 1989 at Maldonado, Uruguay. He carries an Uruguayan nationality and belongs to white ethnicity.  He was a great fan of Diego Maradona.

In 2006, Campana started his career in football by joining the Youth Academy of Deportivo Maldonado. Campana’s professional club career started in 2008 after joining the Uruguayan Club Cerro Largo in which he played 69 times. And also he made his professional debut in 2008. Campana was loaned to Racing Club de Montevideo but due to some problem, he was moved to Defender Sporting on loan in which he appeared for 68 games in 5 years. Campana also played for an Argentine club, Independiente when he signed in 2015.

Campana has a great experience playing at both senior and junior levels. In 2009, Campana was part of Uruguay’s under 20 team squad at the 2009 FIFA World Club which was held in Egypt as the third goalkeeper.

In 2012 Campana was called by Oscar Tabarez for the 2012 Summer Olympics which was held in London, Great Britain.

On 27 May 2016, Campana debuted for the senior Uruguay National Football Team. So far, he has won more than 5 caps for his national side.

Campana was named in Uruguay’s provisional 26-man squad in May 2018 for the 2018 FIFA World Cup and he is playing in the match.

Martin Campana is quite secretive about his personal life regarding relationship status. From the source of his Twitter account, he is a married man with Valviera.  As of 2017, his net worth is $1 million. His annual average salary is $46,000 from his current club. His astrological sign is Gemini. He has a height of 185 cm with 75 kg weight.

Our contents are created by fans, if you have any problems of Martin Campana Net Worth, Salary, Relationship Status, Married Date, Age, Height, Ethnicity, Nationality, Weight, mail us at [email protected]