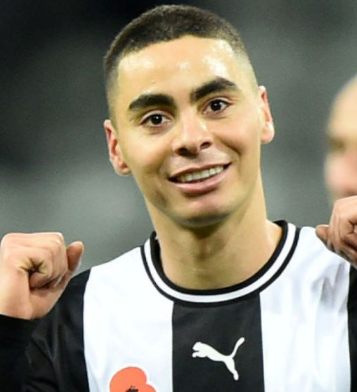 Miguel Angel Almiron Rejala famed as Miguel Almiron is a Paraguayan footballer who plays as an attacking midfielder for Newcastle United and the Paraguay national team. He began his career at Cerro Porteno and transferred to Lanus in 2015. After winning the 2016 Argentine Primera Division, he signed for Atlanta United FC for $8 million. He made his international debut for Paraguay in 2015 and represented the country at the Copa América in 2016 and 2019.

Joelinton only needs to look at what Miguel Almiron did during his own goal drought to realize he can make an impact without scoring. When Miguel Almiron ended his Newcastle United goal drought against Crystal Palace last month, Joelinton was among the first to leap off the substitutes’ bench. The Brazilian, who had been taken off six minutes previously, clenched his fist in celebration and took a few steps forward towards the touchline. Although he only had to wait for three games for his first competitive goal for the Magpies, against Spurs, Joelinton knew what Almiron was experiencing as his team-mate whipped off his shirt and made a beeline for the Gallowgate End.

What is the birthplace of Miguel Almiron?

Miguel Almiron was born on 10th February 1994 in Asuncion, Paraguay as Miguel Ángel Almirón Rejala. As of 2019, he celebrated his 25th birthday. Currently, there is no any information about Miguel’s family and siblings. His nationality is Paraguayan and his ethnicity is Mixed. He grew up in an impoverished family where his father worked 18-hour shifts as a security guard and his mother worked in a supermarket. The seven members of his household slept in three bedrooms, and he had to share a bed with his mother until he was 18. Further information on his educational background is currently not available. He is Christian by religion.

How was the Career of Miguel Almiron?

Miguel Almiron began his football career as a youngster.

He began his football career with the club Nacional, where he made his first appearance at the age of 14.

In 2008, he signed a deal as a youth player with the club Cerro Porteno.

He was a youth player for five years before making his first team debut with Cerro Porteno on March 10, 2013.

In August 2015, he signed with the Argentine Primera Division club Lanus, where he played a key role in the club’s 2016 title win under manager Jorge Almiron.

Atlanta United, an MLS team, offered him a deal, which he accepted on December 5, 2016.

He was a key player for Atlanta United, and he was characterized as the team’s “heartbeat” when he scored his first goal against fellow MLS newcomer Minnesota United on March 12th.

On May 20th, he scored the club’s second hattrick against Houston Dynamo.

He signed for Newcastle for £21 million, a club record and the highest fee ever paid for an MLS player, after helping Atlanta win the MLS Cup in 2018.

He was tackled by James Ward-Prowse during a match against Southampton on April 20 and sustained a hamstring injury that forced him to miss the rest of the season.

In an FA Cup tie against Rochdale that ended in a 1-1 draw, he scored his second goal for the club.
In 2015, he made his international debut for Paraguay, and in 2016 and 2019, he represented the country at the Copa America.

Who is the Girlfriend of Miguel Almiron?

Almiron is not married yet but he is currently dating a girl named Alexia Notto. The Couple seems to be dating happily as Miguel keeps posting a picture of him with his girlfriend in one of his social media account Instagram. There is no information about how the duo met but they are enjoying their life a lot.

What is the Net Worth of Miguel Almiron?

Miguel Almiron is a very successful football player. He is among the highest-paid Atlanta United player. He is a 12th highest-paid player in Major Soccer League (MLS) history. His net worth is believed to have $9 Million as of 2020. His base salary is estimated to be $1,912,500.00. According to the recent stat, he is making about $209,000 per goal created. In addition, he earns from sponsorships and endorsements as well. His source of money is from a football career and he is satisfied with his earnings.

How tall is Miguel Almiron?

Miguel Almiron is a very handsome person with a height of 5 feet 9 inches. His weight and other body measurements have not been revealed by any sources yet but it will be added soon. His body build is athletic. His hair color and eye color, both is black. Overall, he has got a healthy body with a charming personality.

Our contents are created by fans, if you have any problems of Miguel Almiron Net Worth, Salary, Relationship Status, Married Date, Age, Height, Ethnicity, Nationality, Weight, mail us at [email protected]