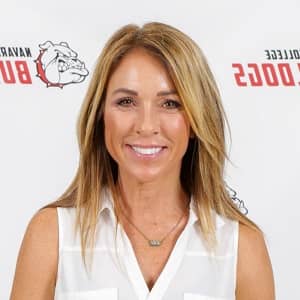 Monica Aldama is a famous American cheerleading coach. She is the coach of the co-ed cheerleading team at Navarro College. Aldama is better known for her appearances on the TV show, ‘Dancing with the Stars’ and the Netflix docuseries, ‘Cheer’.

Monica Aldama was born on February 9, 1970, in Corsicana, Texas. As of 2021, her age is 48. Her zodiac sign is Aquarius. There is no information about her parents, siblings, and other family members. Her ethnicity is Spanish.

Talking about her educational background, she earned her graduation from Corsicana High School and she later enrolled at Tyler Junior College.

How did Monica Aldama become so famous? Cheer, Dancing with the Stars

Monica Aldama is a very well-known cheerleading coach. She works as the coach of the co-ed cheerleading team at Navarro College. Under her leadership, the Bulldogs have earned a national reputation for excellence in cheerleading. They have won 14 NCA National Championships since 2000 in addition to 5 “Grand National” designations.

In 2020, her fame reached new heights as she featured in the Netflix docuseries, ‘Cheer’. It focuses mainly on the 2019 Navarro College co-ed cheerleading team that introduced the whole sport to a wide audience.

Both ‘Cheer’ and ‘Last Chance U’ follow college athletes struggling with injuries and challenges personally. In addition, ‘Cheer’ centers its narrative on her mentorship.

On 2nd September 2020, it was announced that Monica would be participating in the 29th season of ‘Dancing with the Stars’. On the show, she partnered with Val Chmerkovskiy. The duo got eliminated in the 7th week and ended up in 10th overall rank.

What is the Net Worth of Monica Aldama?

According to several online sources, Monica Aldama has an estimated net worth of around $1 million as of 2021. 2020 was her year as she earned considerable fame for her docuseries and for appearing in ‘Dancing with the Stars’.

Who is Monica Aldama married to? Husband, Children

Monica Aldama is currently married. Her husband’s name is Chris Aldama. Judging by his Instagram profile alone, it seems like he is a singer and guitarist. They have not revealed how long they have been together nor their marriage date.

From their marriage, they have two children, daughter Kristian Alexandra (or Ally) and son Austin Aldama. Ally is also a cheerleader and is engaged to Trevor Denbow.

Monica stands at a height of 5 feet 8 inches and weighs around 56 kgs. She has blonde hair and brown eyes.

Monica Aldama has over 44.3k followers on Twitter as of 2021. On Instagram, she has over 652k followers.

Our contents are created by fans, if you have any problems of Monica Aldama Net Worth, Salary, Relationship Status, Married Date, Age, Height, Ethnicity, Nationality, Weight, mail us at [email protected]