Marcelo Nicolas Lodeiro Benitez, professionally known as Nicolas Lodeiro is an Uruguayan football player. He plays for the Seattle Sounders and the Uruguay national team. 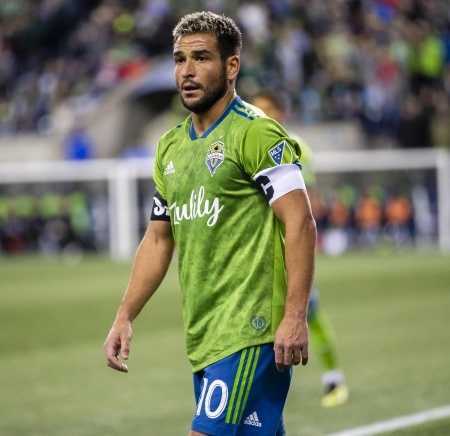 Marcelo Nicolas Lodeiro Benitez, professionally known as Nicolas Lodeiro is an Uruguayan football player. He plays for the Seattle Sounders and the Uruguay national team. He plays as an attacking midfielder. The Uruguayan has played and won several titles in Uruguay, the Netherlands, Brazil, Argentina, and the United States. He wears shirt number 10 at the Sounders. He earned a U.S. green card in February 2018. He made his senior appearance for Uruguay national team in 2009.

What is Nicolas Lodeiro Famous For?

– The popular attacking midfielder from Uruguay.

Where was Nicolas Lodeiro Born?

Nicolas Lodeiro was born on 21 March 1989. His birth name is Marcelo Nicolas Lodeiro Benitez. He was born to a father, Afonso Lodeiro, and a mother, Isabel Lodeiro. His birthplace is in Paysandu in Uruguay. He holds Uruguayan nationality.

He started his youth career at local club Barrio Obrero. His talent was recognized by Nacional and signed him in their youth system in 2003.

He made his debut for Nacional senior team in 2007. He was 18 years old at the time.

He made his Ajax debut in February 2010 against FC Twente. He scored his first goal for the club against Go Ahead Eagles in March 2010.

He didn’t play a single match for Ajax in the 2010-11 season due to the injury sustained during the World Cup.

He joined the Brazilian club Botafogo in 2012.

He helped the club to win Campeonato Carica in 2013.

He joined Brazilian club Corinthians signing a four-year deal worth R$4.5 million in 2014.

A year later, he joined the Argentine club Boca Juniors in 2015.

He led the club to a domestic double, Primera Division and Copa Argentina in 2015.

He joined the American club Seatle Sounders to play in MLS in July 2016.

He scored his first goal for the Sounders in August 2016 against Real Salt Lake.

With Sounders, he won the MLS Cup in 2016. When he arrived, the Sounders were at the bottom of the league. His arrival and contribution turned their season around.

He represented Uruguay U20 national team in 2008.

He led his team to third place at the South American U20 tournament in Venezuela.

He also represented Uruguay U20 national team at the FIFA U20 tournament in Egypt.

He made his debut for the Uruguay senior team against Costa Rica in the CONCACAF-CONMEBOL 2010 World Cup Play-Off.

He represented Uruguay national team in the 2010 FIFA World Cup. He received a red card in Uruguay’s opening match against France becoming the first player to receive a red card in the tournament.

Lodeiro was a member of the Uruguay national team that won the 2011 Copa America.

He scored the first goal for Uruguay national team in their opener match against Ecuador at the 2019 Copa America.

Who is Nicolas Lodeiro Married to?

Nicolas Lodeiro is a married man. He is married to his long-time girlfriend Micaela. They got married in February 2017. The couple has a son, Leandro.

What are Nicolas Lodeiro Body Measurements?

Nicolas Lodeiro stands at a height of 1.7 m i.e. 5 feet and 7 inches tall. He has an athletic body build.

What is Nicolas Lodeiro Net Worth?

Nicolas Lodeiro earns from his professional football career. He has played in several leagues in several countries. His income comes from salary, bonuses, contracts, and endorsements. His net worth is estimated at $2 million at present.

Our contents are created by fans, if you have any problems of Nicolas Lodeiro Net Worth, Salary, Relationship Status, Married Date, Age, Height, Ethnicity, Nationality, Weight, mail us at [email protected]