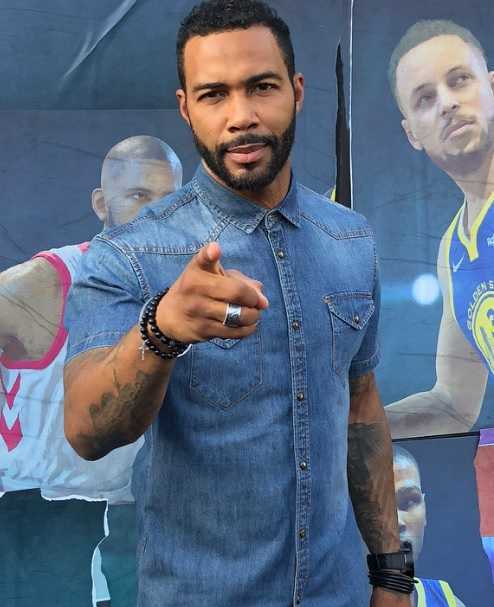 'Power' is a funny thing. Maybe it's a show that draws people in because they are watching people do things they secretly wish they could do or know they could get away with

I'm such a carnivorous researcher as an actor - I chew it up like it's meat, and I really don't know how to do that without the people that are producing or creating or writing that which they want me to chew up

Acting is the art of being and existing, and not being fake.

Omari Latif Hardwick popularly known as Omari Hardwick is an American actor. He has appeared in numerous films and television series. He is best known for his roles in the TV series Saved, Dark blue, Being Mary Jane, and Power. He is known for his work in films, Miracle at St. Anna, The A-Team, Kick-Ass, Will Follow, and For Colored Girls. He has over 3 million followers on his Instagram.

It all started when Omari Hardwick gave a friendly kiss to Beyonce at the NAACP Image Awards. Omari gave her an awkward kiss twice. Beyonce seems uncomfortable at the moment. Fans reacted to the incident on social media. Several made jokes about Power actor, Omari, some expressed their dissatisfaction for making an unnecessary gesture in the public.

50 Cent was one of the top celebrities who made jokes about the Omari-Beyonce kiss incident at the NAACP Image Awards.

He took the incident to Instagram where he posted the video of Omari kissing Beyonce. And he wrote, “Season 6 of POWER Jay Z kills Ghost don’t miss it we lit. LOL jay was like the fuck are you doing pretty nigga. #lecheminduroi #bransoncoganc”. He also commented, “Ghost looking for more money for the queen’s child project”.

What is Omari Hardwick Famous For?

His roles in television series, Saved, Dark Blue, Being Mary Jane, and Power.

His roles in films, Miracle at St. Anna, The A-Team, Kick-Ass, Will Follow, and For Colored Girls.

Where was Omari Hardwick Born?

Omari Hardwick was born on 9 January 1974. His birth name is Omari Latif Hardwick. He was born to a father, Clifford Hardwick IV, and a mother, Joyce Hardwick. His birthplace is in Savannah, Georgia in the United States. He holds an American nationality. He belongs to Black Ethnicity. His zodiac sign is Capricorn. He has 3 siblings, a brother, Jamil, and Malik, and a sister, Shani. He grew up in Decatur, Georgia.

He wrote poetry and actively participated in many sports while pursuing his education. He attended Marist School in Atlanta, Georgia. He was an excellent player in all baseball, basketball, and football. He received a football scholarship from the University of Georgia. He played college football at Georgia. He also continued his acting and poetry. He minored in theater. He is a member of the Alpha Phi Alpha fraternity.

After graduating from the University of Georgia, he entered the NFL draft. But he was not selected in the NFL draft. He tried to make the roster of the NFL San Diego Chargers.

He did several odd jobs to pay for his acting classes. He used to live in his car during his period as a struggling actor.

He got his break in the television film, Sucker Free City in 2004.

He made his tv series debut in a minor role as Ronald Pasco in Crossing Jordan in 2005.

He later landed the main role as Ty Curtis in the TNT action/drama television series, Dark Blue. He appeared in the series between 2009 and 2010.

He is best known for his role as Andre Daniels in an American drama television series, Being Mary Jane. For his role in the series, he won several accolades and nominations.

He is one of the main cast who plays James “Ghost” St. Patrick in the crime drama television series, Power. He has been cast on the show since 2014.

He appeared in minor roles in independent films.

He made his theatrical film debut in the minor role of Lameck in Circles in 2002.

He made his feature film debut in The Guardian in 2006.

He is known for his roles in films, Miracle at St. Anna, Kick-Ass, Will Follow, The A-Team, and For Colored Girls.

His other films are Everyday Black Man, I Will Follow, Sparkle, Middle of Nowhere, The Last Beggars, Things Never Said, Reach Me, Lap Dance, Shot Caller, The Runner, among others.

He has also appeared in short films such as Lu, Kings & Beggars, and The Male Groupie.

He appeared as an extra in Floetry’s “Say Yes” music video in 2002.

He has appeared in other music videos including “Break My Heart” by Estelle, “You Make Me Wanna” by Eshe, “Family Feud” by Jay-Z, and “First Began” by PJ Morton.

He participated award-winningly in the National Poetry Slam in 2003 and 2004.

He became the founding member of “Plan B Inc. Theater Group” in 2010.

He also became a co-founder of “Actor’s Lounge” at the Los Angeles’ Greenway Theater.

Who is Omari Hardwick Married To?

Omari Hardwick is a married man. He is married to publicist Jennifer Pfautch. The couple tied a knot to each other in 2011. The couple has 2 children together, Nova and Brave.

What are Omari Hardwick’s body measurements?

What is Omari Hardwick’s Net Worth?

Omari Hardwick earns from his acting career. He has appeared in numerous films and television series. He has also appeared in a few tv commercials. Working in the entertainment industry is his major source of income. As of 2019, his net worth is estimated at $5 million.

Our contents are created by fans, if you have any problems of Omari Hardwick Net Worth, Salary, Relationship Status, Married Date, Age, Height, Ethnicity, Nationality, Weight, mail us at [email protected]