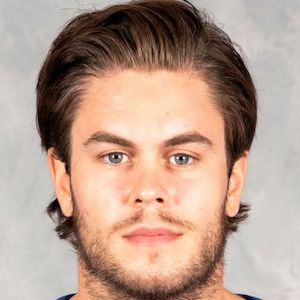 Pontus Aberg is a Swedish professional Ice-hockey player who currently plays for the Toronto Maple Leafs as their Forward in the National Hockey League (NHL). He has also played for other teams like Edmonton Oilers, Nashville Predators, Anaheim Ducks, and Minnesota Wild.

How old is Pontus Aberg?

Pontus Aberg was born in Stockholm, Sweden on 23 September 1993. As of 2020, he is 26 years old. As per his nationality, he is Swedish but his ethnicity is unknown. Similarly, his zodiac sign is  Libra.

How tall is Pontus Aberg?

Talking about his body measurements, he has a height of 5 feet and 11 inches and his weight is around 89kg. Similarly, he has dark brown hair with blue color eyes. The information regarding his waist size, biceps size, hips size, shoe size, dress size, etc is under review.

Who is Pontus Aberg dating?

Currently, Pontus Aberg is in a relationship with his girlfriend, Ellinore. Despite they are unmarried they have a daughter named Molly who was born in 2016.

They revealed in one of the programs of TV 4 that Ellinore was pregnant just after 4 months of their meeting. In the program, they talk about their relationship. However, the couple hadn’t been together for six months when his girlfriend became unplanned pregnant. During the time, he wasn’t sure if he wanted to be a father but he was happy with his girlfriend’s decision.

How did Pontus Aberg Start his career?

Talking about his career, he gave start to his career by making his Elitseren debut during the 2010–11 season, as an extra forward in the second game of the season against Modo Hockey. In May 2011, he extended his contract with Djurgarden to the 2013–14 season. Later, he was transferred to play for fellow SHL club, Farjestad BK in the 2013-2014 season.

Moreover, In the 2014-2015 season, he began playing his first American season by playing for the AHL’s Milwaukee Admirals after signing an entry-level contract with the Predators. He played in 15 regular-season games in the 2016-17 NHL season scoring 1 goal and 1 assist with Predators. The predators re-signed Aberg to a two-year deal on 18 July 2017.

During the 2017-18 season, he was traded to the Edmonton Oilers by the Predators at the NHL trade deadline of 25 February 2018, in exchange for Mark Letestu. He played his debut match for Oilers against the San Jose Sharks on 27 February 2017.

What is Pontus Aberg Net worth?

Talking about his income, as a professional ice hockey player he has earned a good amount of money for his living. His estimated net worth is around $1 million. His salary is around $283K.

Our contents are created by fans, if you have any problems of Pontus Aberg Net Worth, Salary, Relationship Status, Married Date, Age, Height, Ethnicity, Nationality, Weight, mail us at [email protected]