Pope Francis, also known as "Bishop Of Rome", is the first Jesuit pope from America, the first from the Southern Hemisphere, the first to visit the Arabian Peninsula, and the first pope from outside Europe. 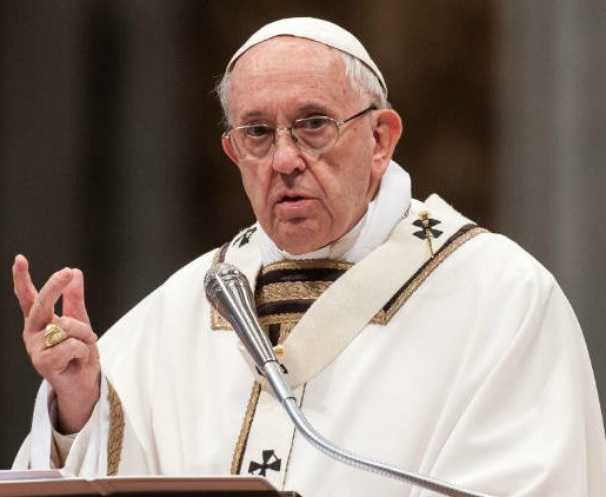 Life is a journey. When we stop, things don't go right

Human rights are not only violated by terrorism, repression or assassination, but also by unfair economic structures that creates huge inequalities

Each of us has a vision of good and of evil. We have to encourage people to move towards what they think is good... Everyone has his own idea of good and evil and must choose to follow the good and fight evil as he conceives them. That would be enough to make the world a better place

Pope Francis, also known as “Bishop Of Rome“, is the first Jesuit pope from America, the first from the Southern Hemisphere, the first to visit the Arabian Peninsula, and the first pope from outside Europe.

Francis was elected as the 266th pope of the “Roman Catholic Church” in March 2013, thus turning to “Pope Francis” from Jorge Mario Bergoglio(birth name). Pope took his papal title after St.Francis of Assisi of Italy.

Pope was elected “Person Of The Year” by Times Magazine in 2013 prior to his inauguration. Pope Francis is the head of the Catholic Church and the Vatican City State’s sovereign.

WHAT IS POPE FRANCIS LOCALLY Remembered FOR?

– He has been praised for his modesty, focus on God’s grace, international prominence as Pope, compassion for the needy, and contribution to interfaith dialogue.

WHERE WAS THE BIRTHPLACE OF POPE FRANCIS?

Pope Francis was born in Argentina’s Buenos Aries on 17 December 1936. Jorge Mario Bergoglio was his given name. Mario Jose Bergoglio (father) and Regina Maria Sivori (mother) were Italian immigrants (mother). He was the oldest of five siblings; he is believed to be the only surviving sibling.

Pope Francis graduated as a chemical technician from the Escuela Técnica Industrial Hipólito Yrigoyen before enrolling in the Villa Devoto Diocesan Seminary. In March 1958, he entered the Society of Jesus’ novitiate.

Francis taught literature and psychology at Santa Fe’s Immaculate Conception College in 1964 and 1965, as well as at Buenos Aires’ Colegio del Salvatore in 1966. He studied theology at the Colegio de San José from 1967 to 1970 and completed his doctoral thesis in theology at Freiburg University in Germany in 1986. Jorge Bergoglio was originally reported to have earned a Master’s degree in Chemistry by the media.

At the age of 21, he suffered from life-threatening pneumonia and three cysts, necessitating surgery to remove a portion of one of his lungs due to a severe infection.

Bergoglio worked as a bar bouncer and a janitor sweeping floors prior to joining the Jesuits. He also conducted experiments in a chemical laboratory. Bergoglio has been a lifetime fan of the football club San Lorenzo de Almagro. He is also a fan of Tita Merello’s films, neorealism, and tango dancing, with a particular fondness for Argentina and Uruguay’s popular music known as the milonga.

Bergoglio has stated that as a young seminarian, he developed a crush on a girl he met and briefly considered abandoning the religious life.

He studied humanities in Santiago, Chile, as a Jesuit beginner. Bergoglio became a Jesuit on 12 March 1960, at the end of his novitiate in the Society of Jesus, when he professed the original, eternal vows of poverty, chastity, and obedience required of a member of the order.

POPE FRANCIS’S JOURNEY TO THE PRIESTHOOD

Bergoglio (Pope Francis) discovered his priestly calling while on his way to the Spring Day. On 13 December 1969, Pope Francis was ordained to the priesthood. Francis was then named provincial of Argentina by the Jesuits in 1973. He has stated that his mother initially opposed his decision to join the priesthood, despite her being a devout Catholic. However, by the time he was ordained, she had acknowledged his calling and at the close of his ordination service, she asked for his blessing. He later returned to his alma mater, the Colegio de San José, where he served as rector and professor of theology from 1980 to 1986.

Bergoglio was appointed “Titular Bishop of Auca” and “Auxiliary of Buenos Aires” on 20 May 1992 and was ordained into those positions a week later. He succeeded Antonio Quarracino as “Archbishop of Buenos Aires” in February 1998. Bergoglio was the sole church official to reconcile in 2000. In February 2001, Pope John Paul II promoted him to the rank of cardinal and appointed him cardinal-priest of Saint Robert Bellarmino. In 2005, he was named president of Argentina’s Bishops’ Conference, a position he held until 2011.

Following the death of Pope John Paul II in April 2005, Pope Francis became the first Latin American to lead the Catholic Church and also the first Jesuit to do so when he succeeded Benedict XVI and assumed the papacy in 2005.

Bergoglio’s main projects as archbishop included expanding the Church’s presence in Buenos Aires’ slums. The number of priests assigned to work in the slums more than doubled under his rule. As a result of this work, he received the nickname “Slum Bishop.”

Jorge Bergoglio was elected the 266th pope of the Roman Catholic Church on 13 March 2013 at the age of 76, becoming the first resident of the Americas, the first non-European, and the first Jesuit priest to be named pope, and adopting the name Pope Francis (he took the title after St. Francis of Assisi of Italy).

Pope Francis served as an archbishop and cardinal for more than 12 years prior to the 2013 papal conclave. The tone of his papacy, which has attracted global respect, was developed long before he was elected to the church’s highest position; however, when he was appointed, the media quickly picked up on reports about his modesty.

The news spread that he returned to the boarding house where he had been staying to directly pay his bill rather than sending an assistant, and that he preferred a small two-room apartment to the lavish papal accommodations in the Vatican’s Apostolic Palace. Pope Francis broke from a tradition that had been maintained by popes for more than a century by opting to live more easily.

Pope Francis addressed a crowd of tens of thousands in St. Peter’s Square in the Vatican City in Rome, Italy, following his appointment by the conclave “As you are aware, the conclave’s mandate was to name a bishop of Rome. To my mind, my brother cardinals have selected someone from afar… I am here.

I’d like to express my gratitude for your embrace.” Following the announcement of the results of the 2013 papal conclave, US President Barack Obama released the following statement about the new pope: “As the first pope from the Americas, his selection also speaks to the power and vitality of an area that is increasingly shaping our world, and alongside millions of Hispanic Americans, those of us in the United States share in the joy of this historic day.”

Pope Francis started giving more complex views and perspectives on key social problems on which the church has strong doctrinal positions shortly after taking the papacy. He has not shied away from elaborating on those views, and sound bites such as “Who am I to judge?” in reference to homosexuality have placed him as a compassionate conservative whose views are often considered radical in contrast to those of his predecessors.

Despite being named Time magazine’s person of the year in 2013, the new Pope was quick to upset a few people. His first clash was with the Mafia, urging mobsters to pray for forgiveness after a three-year-old girl was shot in the head in southern Italy. Next, he said God is not “A Magician with a Magic Wand”, and declared evolution and the Big Bang theory to be consistent with Catholic beliefs – though it was still his belief that God created humans. Finally, he personally asked for forgiveness for the “evil” of Catholic Church priests who sexually abused children.

POPE AS A SPIRITUAL LEADER

Pope Francis turned to be the most spiritual and world leader in 2013 when he called for others to join him in praying for peace for Syria, which was attended by about 100,00 people. According to the Catholic News Service, Francis told the crowd that “When a man thinks only of himself, permits himself to be captivated by the idols of dominion and power, then the door opens to violence, indifference, and conflict.” Francis implored those involved in the conflict to find a peaceful solution saying: “Leave behind the self-interest that hardens your heart, overcome the indifference that makes your heart insensitive towards others, conquer your deadly reasoning, and opens yourself to dialogue and reconciliation.”

Francis explained that religious dialogue must be a border in scope, not simply focused on such issues as homosexuality and abortion. While he doesn’t believe women should be ordained as priests, Francis considers women as an important part of the church. In early December 2013, Francis gave as exploration addressing for big changes in the Catholic Church, including rethinking long-held but antiquated customs. Francis was nominated for the “Nobel Peace Prize” in 2014, but he did not receive this honor.

In 2015, Pope Francis opened the Holy Door marking the way of beginning of the “Extraordinary Jubilee of Mercy”.

Throughout 2016, the year of his 80th birthday, Pope Francis remained engaged with the modern age and outspoken on world events and current affairs. On a visit to Mexico in February, he made thinly-veiled comments against the then-presidential candidate Donald Trump’s proposals for border controls and tighter immigration. “A person who thinks only about building walls, wherever they may be, and not building bridges, is not Christian,” the pontiff said. “This is not the gospel.” He also cautioned against “Social Walls” and “False Prophets” four days before the election.

Pope Francis “A Man of His Word” debuted at the 2018 Cannes Film Festival. The documentary, written and directed by Wim Wenders, shows the Pope’s “work of reform and his answers to today’s global questions from death, social justice, immigration, ecology, wealth inequality, materialism, and the role of the family.” A co-production with the Vatican, the film also follows the Pope on his journeys around to world to places like the World Holocaust Remembrance Center in Jerusalem and Ground Zero to the Holy Land and Africa. Pope Francis is also an “Environmental Activist”, where he spoke out about the warnings of the dangers of climate change.

HOW IS POPE FRANCIS’S PERSONAL LIFE?

Pope Francis as a young seminarian, had felt in love with a girl, who was also one of the members of a group of his friends however due to the religious vocation he had no choice rather let her go.

After he became the pope he had no relationship with anyone. However, there is a rumor about him being married and widowed before he got elected as a pope.

WHAT IS THE NET WORTH OF POPE FRANCIS?

The first American Catholic priest, Pope Francis through his spiritual, leadership, and love for others has been the most important personality of America.

Our contents are created by fans, if you have any problems of Pope Francis Net Worth, Salary, Relationship Status, Married Date, Age, Height, Ethnicity, Nationality, Weight, mail us at [email protected]