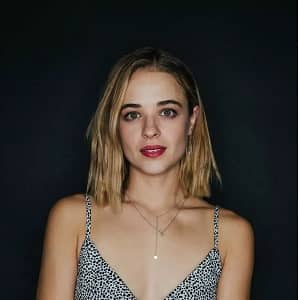 Raechelle Banno is an Australian actress, dancer, model, and writer famous for her portrayal of Olivia Fraser Richards in the soap opera, ‘Home and Away’ from 2015 to 2018. Moreover, she is also known for her portrayals of Atria Nine in ‘Pandora’ (2019) and Ruby Landry in the four television films that were adapted from V. C. Andrews’ Landry novels in 2021.

How old is she? Raechelle Banno was born as Raechelle Jasmine Banno on 28 April 1993 in Sydney, New South Wales, Australia. As of 2021, her age is 28. There is no information about her father. She has a mother named Joanne Banno.

Also, she has two siblings. Banno has an identical twin sister named Karina Banno who is also an actress whereas her elder sister Stephanie Banno is a PR and Communications Executive.

Where did Banno study? Talking about her education, Raechelle completed her schooling at Fairfield West Public School and Fairvale High School and graduated in 2010. Also, she completed her acting courses at the National Institute of Dramatic Art (NIDA).

Raechelle Banno’s first film, titled “Exposure,” was released in 2013, and she worked as a writer and producer on it. She then starred in two short films, Nouchka Bortsov in “Second Best” in 2016 and Emma in “Phenomena” in 2018. In 2020, she starred in the film ‘BladeRoller: Case Unsolved,’ in which she played Kris Kent. She also worked on this film as a writer and co-director.

Banno made her television debut as Courtney in an episode of “In Your Dreams” in 2012. From 2015 to 2018, she was a member of the main cast of the Australian television soap opera “Home and Away,” where she played Olivia Fraser Richards. She is also known for her role as Atria in the science fiction drama series “Pandora.”

In 2020, Raechelle lent her voice to the characters, Scarlet Jagger, Doris, and Beatrice Beefcheek in the film “100% Wolf: Legend of the Moonstone.” In the year 2021, she played Ruby Landry in the films “Ruby,” “Pearl in the Mist,” “All That Glitters,” and “Hidden Hewel.”

What is the Net Worth of Raechelle Banno? As of 2021, Raechelle Banno has an estimated net worth of around $1.5 million according to online sources. Her main source of income is acting and Banno has earned a very good sum of money from her acting career so far.

How tall is she? Raechelle stands at a height of 5 feet and 3 inches and weighs around 55kg (121lbs). She has green eyes and blonde hair color.

Is Raechelle Banno dating anyone? As of now, Raechelle is single and not dating anyone. She seems more focused on her career and has not revealed anything about having a boyfriend as of now.

Previously, she was rumored to be dating her “Home and Away” co-star, Scott Lee. However, these reports were never confirmed. She was also linked with Henry Wells for some time.

You may also like to read more about the Age, Bio, Net Worth, Relationships, and more about Emilie Cocquerel, Eliza Scanlen, Angourie Rice, and more.

Our contents are created by fans, if you have any problems of Raechelle Banno Net Worth, Salary, Relationship Status, Married Date, Age, Height, Ethnicity, Nationality, Weight, mail us at [email protected]