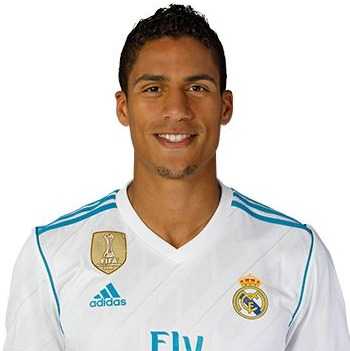 Raphael Varane is a French professional footballer who plays as a center-back for Spanish club Real Madrid and the France national team. He began his professional youth career from French club Lens in 2002. He was promoted to the senior team of Lens in 2010. Spanish club Real Madrid signed the young defender in 2011. Since joining the Spanish giants in 2011, Varane has achieved a successful career. He has made over 200 appearances for the club and has won 15 major honors including two La Liga titles and four UEFA Champions League titles.  At only 24 years of age, Varane won his third UEFA Champions League trophy making him the youngest defender ever to have won three Champions League trophies since Paolo Maldini who was 26 when he won his third Champions League title. He has also won the 2018 FIFA World Cup with France in Russia. The year 2018 has become most fruitful for the French defender. He was included in the FIFA FIFPro World XI, UEFA Champions League Squad of the Season, FIFA World Cup Dream Team, all in 2018.

Former French footballer, manager, and former UEFA President Michel Platini claimed that one should not get surprised if Raphael Varane wins Ballon d’Or this year. He further clarifies that the young defender has won two major titles, Champions League with Real Madrid and FIFA World Cup with France within the space of two months. Cristiano Ronaldo and Lionel Messi have dominated Ballon d’Or over the decade and the last defender to win the award was Fabio Cannavaro, back in 2006.

Real Madrid is going through a bad season. Currently, it can be said that they have had the worst run ever since a decade. And the bad news is Real Madrid is suffering from an injury to most of his players. The injury list goes long including Mariano, Marcelo, and Varane. Varane suffered a long-leg adductor muscle injury in a 5-1 loss in an El Classico. Reports after the tests say he could be out for months.

Raphael Varane was born Raphael Xavier Varane on April 25, 1993, in Lille, France. He was born to his father, Gaston Varane, and mother, Annie Varane, and grew up with his siblings, Jonathan, and Anthony Varane. Varane holds a Martinican and French nationality and belongs to black ethnicity. His father is of Martiniquais heritage and his mother is from France. His sun sign is Taurus.

The career of Raphael Varane

Varane started his football career at the age of seven in 2000. Varane joined the native Football Club called Hellemmes and began to enhance his football skills. After spending two years at this club, he joined the professional club called RC Lens in 2002. He spent 8 years at Lens. For the development of his football skills, during the time period, he used to spend his weekdays at the Centre de Preformation de Football in nearby Lievin and his weekends, playing with Lens.

The young defender was promoted to the Lens youth system in 2008. Varane was called up to the senior team in November 2010 to play in Ligue 1.

Varane scored his debut professional goal against Caen on 8 May 2011. His debut club was relegated to Ligue 2 at the end of the 2010-11 season.

Spanish club Real Madrid signed the young talent from Lens in June 2011, ahead of the 2011-12 season for a reported fee of around 10 million Euro.

Varane made his competitive debut for Real Madrid against Racing de Santander and scored his first goal for the club against Rayo Vallecano, both in September 2011. Varane became the youngest foreign player at 18 years and 152 days old to score a goal in a competitive match for Real Madrid.

Varane was named the Best foreign eleven in Real Madrid’s history by March in April 2013.

Initially, Raphael Varane represented France at different age levels including France U18, U20, and U21. Varane made his debut for the France senior team against Georgia on 22 March 2013.

Varane has represented France’s senior team at the 2014 and 2018 FIFA World Cups. However, he was not included in the 2016 Euro Cup following an injury. Varane proved himself a key player in the France team that won the 2018 FIFA World Cup in Russia defeating Croatia 4-2.

Varane became the fourth player after Christian Karembeu, Roberto Carlos, and Sami Khedira to win the Champions League and FIFA World Cup in the same year.

The 25-years old Raphael Varane is a married guy. He is married to his longtime partner Camille Tytgat They got married in 2015. The couple is blessed with a son named Ruben. The pictures of his wife and his son can be frequently seen on his Instagram.

In 2016, Varane left the house in a hurry and forgot to connect his sophisticated alarm system, which resulted in the robbery of his house. Around 60,000-pound cash, jewelry, expensive watches, and clothes were taken.

The 25-years old French defender stands 1.91 m tall ie six feet and three inches tall. He has a bodyweight of 80 kg. He has an athletic body build and has maintained his body perfectly fit.

Net Worth of Raphael Varane

The French defender for Real Madrid has come to a successful career at Real Madrid. As of 2018, the net worth of Raphael Varane is estimated at around $15 million. He has an annual salary of around 5 million at Real Madrid. He has also sponsorship deals with Nike and Adidas.

Our contents are created by fans, if you have any problems of Raphael Varane Net Worth, Salary, Relationship Status, Married Date, Age, Height, Ethnicity, Nationality, Weight, mail us at [email protected]