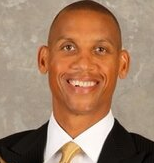 Reginald Wayne Miller famed as Reggie Miller is an American retired professional basketball player. He played his entire 18-year National Basketball Association (NBA) career with the Indiana Pacers. He was known for his precision three-point shooting, most notably against the New York Knicks. He also earned the nickname Knick Killer. He is the second man to hold the record for 3-point field goals, first is Ray Allen. He also won a gold medal in Summer Olympics 1996. At present, he works as an NBA commentator for TNT. On 7th September 2012, he was inducted into the Naismith Memorial Basketball Hall of Fame.

On Tuesday night’s Inside the NBA, Shaquille O’Neal, Charles Barkley, Dwyane Wade, Kenny Smith, and Ernie Johnson, were still reeling over the death of Kobe Bryant. The crew was talking about what Kobe Bryant meant to them, including Shaq’s tearful monologue, and sharing inside anecdotes about the late Los Angeles Lakers legend. Reggie Miller talked about Kobe’s first nickname, which thankfully did not catch on. “Kobe wanted to know what was all the intricate trash-talking and moves that were going on between MJ and I,” Miller said of his conversation with the young Kobe despite “not having a very strong relationship” with Jordan. Reggie told Kobe that “there’s only one Black Cat,” referring to Michael Jordan. “I refused to call Michael, ‘Michael Jordan,’ so I called him the ‘Black Cat,’” Miller said. Kobe was so quiet on the phone, and then Kobe finally broke his silence. “You know what, you’re gonna refer to me as the ‘Caramel Cat,’” Kobe, who isn’t even in the NBA yet, told Miller of how to address him as if he was the next Michael Jordan.

What is the birthplace of Reggie Miller?

Reggie Miller was born on 24th August 1965, in Riverside, California as Reginald Wayne Miller. His nationality is American and his ethnicity is African. He is Christian by religion. By his birth, he cannot walk normally for which he had to wear braces on both legs. After a few years, he recovered. His father was in military service. Talking about his siblings, he has 5 siblings. His brother is a baseball player. His younger sister is a volleyball player and his elder sister is a basketball player Miller still remembers when his older sister Cheryl used to defeat him in games of 1-on-1 prior to his professional career. Miller’s other brother Saul, Jr. became a musician. As of 2019, he celebrated his 54th birthday. About his education, he attended Riverside Polytechnic High School for his primary studies and later studied History as her major subject from the University of California, Los Angeles. In the 1984-1985 NCAA season, he helped the UCLA Bruins to an NIT championship. He was an All-Pac-10 selection for the second straight year and led the Bruins to a Pacific-10 regular-season championship and the first Pacific-10 Conference Men’s Basketball Tournament championship in the senior season in 1986-1987.

How was Reggie Miller’s Career?

The Pacers drafted Reggie Miller 11th overall in the first round of the 1987 NBA draft.

Before becoming a starter, he wore number 31 as a backup to shooting guard John Long.

In 1992, he established himself as the Pacers’ primary scoring threat, scoring a career-high 57 points in a 134-122 win over the Charlotte Hornets at Charlotte Coliseum.

During the Eastern Conference Finals against the Knicks in 1994, he became a household name.

On WTHR, he also hosted The Reggie Miller Show, a talk show.

Miller suffered an eye injury near the end of the 1996 season, preventing him from playing in the playoffs until Game 5 of the first round against the Atlanta Hawks, where he wore goggles.

Miller and the Pacers were one of the East’s favorites going into the 1999 season.

He led the Pacers in scoring with 27 points, including four of the Pacers’ eight three-point attempts.

For his final game, he received a standing ovation.

Miller earned over $105 million during his 18-year NBA career, appearing in 1,389 games for the Pacers.

He is one of only eight players to reach the milestones of 50–40–90 and has a career total of 2,560 3-pointers, which was an NBA record at the time of his retirement. Ray Allen has since surpassed him in terms of totals.

Miller revealed his intentions to join TNT as an NBA analyst in August 2005; his niece, Cheryl, is a TNT NBA sideline reporter.

On March 30, 2006, at Conseco Fieldhouse, his number 31 was retired during halftime.

He also became a weekly contributor to ESPN Radio’s The Dan Patrick Show in June 2005, providing commentary to the show.

He revealed in December 2009 that a Special Premiere Movie event will take place at Conseco Fieldhouse on Friday, February 26.

Who is Reggie Miller’s Wife?

Reggie Miller is a married person. He was previously married to Marita Stavrou, an American actress from 1992 till 2001. They shared a very romantic and cheerful moment for almost a decade. He had 2 short relationships after the separation; Jaimyse Haft and Natane Boudreau, both of them are American actresses. As of today, Miller is single. He is living a single life happily without any disturbances. He is enjoying his life a lot.

What is the Net Worth of Reggie Miller?

Reggie Miller is a very successful basketball player. With his career as basketball, he has accumulated a huge amount of money. As of 2020, he has a net worth of $90 Million but his salary has not revealed yet. There is no doubt in the mind of his followers that he is making a considerable amount of salary from his work. As of today, he is satisfied with his earnings.

How tall is Reggie Miller?

Reggie Miller is a very handsome and cool person with an athletic body build. Regarding his body measurements, he has a good height of 6 feet 6 inches (1.98 m) with a balanced weight of 88 Kg. He has a black hair color and his eye color is also black. There is no information about his shoe size, biceps size and more but it will be added soon.

Our contents are created by fans, if you have any problems of Reggie Miller Net Worth, Salary, Relationship Status, Married Date, Age, Height, Ethnicity, Nationality, Weight, mail us at [email protected]