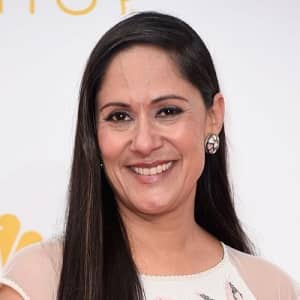 Sakina Jaffrey is an American actress. She is famous for her portrayal of Doctor Hickman in the series, ‘Third Watch.’ Moreover, she is also famous for her works on ‘House of Cards’, ‘The Mindy Project’, and ‘Mr. Robot’.

How old is she? Sakina Jaffrey was born in New York City, New York, the United States on 14 February 1962. As of 2021, her age is 59. She was born to parents Saeed Jaffrey (father) and Madhur Jaffrey (mother).

Both of her parents were actors and her mother was also a food and travel writer. When she was just three years old, her parents got divorced. She was raised by her mother alongside her sister, Meera Jaffrey in New York.

Where did she study? Talking about her educational background, Sakina earned her graduation with a major in the Chinese language from Vassar College in Poughkeepsie, New York.

Sakina Jaffrey made her film debut as Neena Lal in the 1988 film “The Perfect Murder.” In 1989, she played Wilfredo’s receptionist in the film “Slaves of New York.” She then went on to star in a number of films in the 1990s.

She also starred in the 2010 television film “Nevermind Nirvana.” The following year, she played Livleen Singh in the sports comedy film “Breakaway.” Similarly, she played Serena in the 2012 film “The Domino Effect.” She then went on to play Maya in the 2016 drama film ‘Claire in Motion.’

Moreover, she is well-known for her role in the television series, ‘House of Cards’ where she portrayed Linda Vasquez from 2013 to 2018.

What is the Net Worth of Sakina Jaffrey? Sakina Jaffrey has an estimated net worth of around $3 million as of 2021. Her main source of income is acting and so far, she has earned a decent amount of money from her career.

How tall is she? She stands at a height of 5 feet and 8 inches and weighs around 61kg (134lbs). Her body measurements for breasts, waist, and hips are 32-26-32 inches. She has a pair of brown eyes and brown hair.

Is Sakina Jaffrey married? Yes, Sakina Jaffrey is married to Francis Wilkinson. Her husband is a journalist. The couple dated for some time before exchanging wedding vows on 8 September, 1990. From their marriage, the couple has two children, Cassius Wilkinson and Jamila Wilkinson . They currently live in Nyack, New York, and are happy with their lives.

Other than that, they have not revealed anything about their marriage and are mostly private regarding their married life.

You may also like to read more about the Bio, Age, Relationships, Social Media, Height, and more about Anjelica Bette Fellini, Madisyn Shipman, Justine Wachsberger, and more.

Our contents are created by fans, if you have any problems of Sakina Jaffrey Net Worth, Salary, Relationship Status, Married Date, Age, Height, Ethnicity, Nationality, Weight, mail us at [email protected]