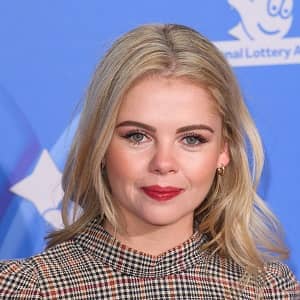 Saoirse-Monica Jackson is a Northern-Irish actress famous for her portrayal of Erin Quinn in the British sitcom, ‘Derry Girls’. She is also known for her works in  ‘The Five’, ‘Broken’, and ‘There You’ll Find Me’.

How old is Saoirse-Monica Jackson?

Saoirse-Monica Jackson was born on 24 November 1993, in Derry, Northern Ireland. As of 2020, her age is 26. She has not revealed much about her parents but has revealed that her parents owned a village pub and her mother’s name is Ruth.

Regarding her educational background, she obtained her GCSEs and A-Levels at St Cecilia’s College in Derry. After that, she trained in acting at the Arden School of Theatre in Manchester, UK.

How did Saoirse pursue her career?

Saoirse-Monica Jackson got her television debut in 2016 with the role of Sasha in ‘The Five’. She made appearances in a total of four episodes. The same year, she also portrayed Curley’s wife in the ‘Birmingham Repertory Theatre tour’ of ‘Mice and Men’.

In 2017, she made an appearance in the final episode of the TV series, ‘Broken’. A year later, she played Shena Carney in a West End production of ‘The Ferryman’ at the Gielgud Theatre.

It was in 2018 that Jackson made her debut as the lead character, Erin Quinn in ‘Derry Girls’ airing on Channel 4 on 4 January 2018. This would be her breakthrough role and her most memorable performance. Her performance earned her a nomination for the IFTA Gala Television Award for Best Female Performance.

She and her colleagues of ‘Derry Girls’ have gotten pretty close and they have developed a fantastic on-screen and off-screen chemistry between them. After the massive success of the series, the directors released the second season of the award-winning comedy show, and a third season is set to release in 2020.

On 26 June 2020, she and her fellow co-stars performed a sketch with the famous Irish actress, Saoirse Ronan for the RTÉ fundraising special ‘RTÉ Does Comic Relief’, with proceeds going towards those affected by the coronavirus.

What is the Net Worth of Saoirse-Monica Jackson?

Saoirse-Monica Jackson has an estimated net worth in the region of $100k – $1 million as of 2020. She is a popular actress and is now gaining more and more fame with Derry Girls. Her net worth is expected to increase in the coming years.

How tall is Saoirse-Monica Jackson?

Jackson stands at a height of around 5 feet 2 inches and weighs around 57 kg. Her body measurements for breasts, waist, and hips are 34-25-35 inches. She has blonde hair and a pair of beautiful green eyes.

Is Saoirse-Monica Jackson dating anyone?

Currently, Saoirse-Monica Jackson is single. She is not dating anyone and is not in a relationship. She is more focused on her career as of now. Moreover, she has stayed tight-lipped about her relationships and has not revealed much.

However, she has revealed one of her previous relationships before she became a TV star. She revealed that she was living with her ex-boyfriend in Manchester and lied to him and told him that she had a sales job in town while going for her role for Derry Girls.

The ‘Derry Girls’ star is active on social media sites. She has over 86.1k followers on Twitter. Similarly, her Instagram account has more than 216k followers.

Our contents are created by fans, if you have any problems of Saoirse-Monica Jackson Net Worth, Salary, Relationship Status, Married Date, Age, Height, Ethnicity, Nationality, Weight, mail us at [email protected]