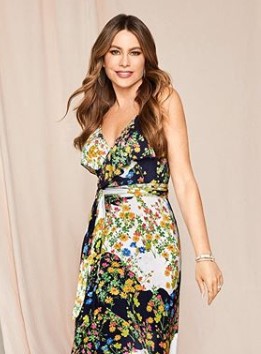 One of the gorgeous multi-talented celebrities, Sofia Vergara is an actress, television producer, comedian, presenter, and model. She earned her popularity in the late 1990s when she was co-hosting two Spanish television shows. Also, She enjoyed the position of top-paid American television actress in the years 2012, 2013, and 2016 and became one of the best-paid actresses in the world in 2019. She won the “People’s Choice Award” in the category of Favorite TV Comedy Actress for Modern Family in 2017. Let’s know more about her through this article.

What is Sofia Vergara famous for?

Where does Sofia Vergara live?

Recalling her early life, Sofia was born as Sofía Margarita Vergara Vergara to her parents, Julio Enrique Vergara Robayo and margarita Vergara Davila de Vergara in the year 1972. Currently, she is 47 years old and belongs to white ethnicity. Her father was a cattle rancher and her mother was a homemaker.

Similarly, she raised in Barranquilla, Colombia along with her 4 siblings named Sandra Vergara, Rafael Vergara, Veronic Vergara, and Julio Vergara. Sadly, her older brother was killed in gunfire during a botched kidnapping attempt in 1998. The family later moved to Miami, Florida, to escape from the unrest in Colombia. She hols Columbian-American citizenship and her birth sign are Cancer. Further, her religious views are Roman Catholicism.

For education, she attended Marymount International School Barranquilla, a private bilingual Spanish/English school. She later studied dentistry for three years at a university in Colombia but dropped out without finishing the last two semesters to pursue a modeling career.

How Sofia Vergara become an actress?

What are the achievements of Sofia Vergara?

Who is Sofia Vergara married to?

Reflecting on her personal life, Sofia was married twice to date. Firstly, she married her childhood sweetheart, Joe Gonzalez in 1991 at the age of 18. Together, the duo blessed a son named Manolo Gonzalez-Ripoll Vergara. However, the duo ended their married life in 1993.

After that, she has a romantic relationship with Craig David in 2003. Also, the lovebirds did not continue their life together and later broke up. Then, he fell in love with a politician named Nick Loeb in 2010. The couple has an on-off relationship until 2012. After that, the couple engaged in July 2012, but after nearly two years of engagement, they separated on 20th May 2014.

The same year, she met the actor Joe Manganiello at White House Correspondents’ Dinner Party, and soon they dating each other. Also, they engaged during the Christmas of the same year. Then, the couple married in Palm Beach, Florida on November 21st, 2015. Presently, the couple lives blissfully and lavish life and seems to be happy. However, the couple does not have children together.

How much is Sofia Vergara worth?

Being an actress and model, Sofia has an impressive amount of money and fame through her profession in the field of the entertainment industry. Based on some online reports, her estimated net worth said to be $180 million. Also, she adds up her income through her endorsements like Diet Pepsi, KMart, Comcast Xfinity, Head & Shoulders Spokesperson, medicine Synthroid, Rooms To Go, etc. Further, the details of her assets are yet to be disclosed.

How tall is Sofía Vergara?

Observing her body physics, Sofia stands a height of 5 feet 7 inches and weighs around 64 Kg. Similarly, she has a pair of hazel eyes and blonde hair color. Further, her body measures 38-28-39 inches and her bra size is 32F. Additionally, she used 8 (US) dress size and she has a Voluptuous body.

Our contents are created by fans, if you have any problems of Sofia Vergara Net Worth, Salary, Relationship Status, Married Date, Age, Height, Ethnicity, Nationality, Weight, mail us at [email protected]