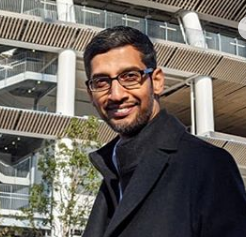 Pichai Sundararajan famed as Sundar Pichai is an Indian American business executive, the chief executive officer (CEO) of Alphabet Inc. and it’s subsidiary Google LLC. He began his career as a materials engineer and joined Google as a management executive in 2004. He rose to face after becoming the company’s Product Chief, then Google’s CEO in 2015. He became CEO of Alphabet Inc. in December 2019.

Sundar Pichai taking over the Google universe means for search, Android and Nest

Larry Page and Sergei Brin are riding into the sunset at a critical time in the development of Google products. Larry Page and Sergei Brin have decided to step aside from the day-to-day management of Google’s parent company Alphabet. The destiny of the company — and all of its thorny challenges — are being handed over to Google CEO Sundar Pichai, who now also takes the wheel as Alphabet’s chief executive. As Alphabet CEO, Pichai will now come under more and more pressure from Wall Street to diversify Google’s revenue. That will resurface the questions of whether Google should aggressively market its own Pixel devices at the expense of its partners or if it should evolve its mobile strategy from Android to Chrome OS-powered phones. Either option would be disruptive to loyal Android users.

Sundar Pichai was born on July 12, 1972, in Chennai, Tamil Nadu, India, with the surname Pichai Sundararajan. His race is Indian and his nationality is American-Indian. Regunatha Pichai, his father, worked as an electrical engineer for the British conglomerate GEC and managed an electrical part factory, while Lakshmi, his mother, worked as a stenographer before having children. He only has one sibling. He studied at Padma Seshadri Bala Bhavan before enrolling at Kharagpur’s Indian Institute of Technology. After that, he received his B.Tech in Metallurgical Engineering from IIT Kharagpur before winning a scholarship to Stanford University to study materials science and semiconductor physics, where he eventually earned his M.S. In the year 2019, he turned 47 years old.

How was the career of Sundar Pichai?

Sundar Pichai began his career as a management consultant at McKinsey & Company before joining Google.
At Applied Materials, he also contributed his engineering and product management skills.

He is known for his work on well-known items such as Toolbar.

Prior to the launch of Chrome, he worked on other Google products such as Google Gears and Google Pack.

After Google found that the toolbar improved user searches, it launched Google Chrome, the company’s own browser.

He was in charge of product management and was instrumental in the creation of Google’s client software products, such as Google Chrome and Chrome OS.

He was the one who first introduced the Chrome browser to the world.

From 2008, he rose to prominence at Google presentations, and he quickly became a well-known Google face.

He was named the new CEO of Google in 2015, after their well-known chief, Larry Page, declared his retirement from Google to take the helm of Alphabet, Inc., their new holding company.

Larry Page himself announced him as the Product Chief at Google.
He was also a strong contender for the role of Microsoft’s new CEO, which went to Satya Nadella in the end.

Sundar Pichai’s Wife: Who Is She?

Sundar Pichai is a happily married man. Anjali Pichai, his longtime girlfriend, was his wife. When they were both students at IIT Kharagpur, they were classmates. Kiran Pichai and Kavya Pichai, the couple’s two beautiful children, complete the family. As of now, the couple is having a great time together with no problems. They are happy with their lives. He is not gay and has a straight sexual orientation.

Sundar Pichai’s net worth is unknown.

As of 2019, this celebrity’s net worth is estimated to be $650 million, with a salary of $199.7 million. He also paid $6.8 million for a home in Brooklyn, New York. He now lives in the United States with his entire family as a US citizen. His earnings allow him to live a luxurious lifestyle. In general, he is happy with his earnings.

What is the height of Sundar Pichai?

Sundar Pichai is a very cool and gentleman. He has got a perfect height matching with his body weight. He has a height of 5 feet 11 inches. His body weighs 66 kg. He has black hair and dark brown eyes. His body build is slim. His other body details have not been published in any sites yet but it will be added once we get information about his waist size, shoe size, and more details about his body.

Our contents are created by fans, if you have any problems of Sundar Pichai Net Worth, Salary, Relationship Status, Married Date, Age, Height, Ethnicity, Nationality, Weight, mail us at [email protected]