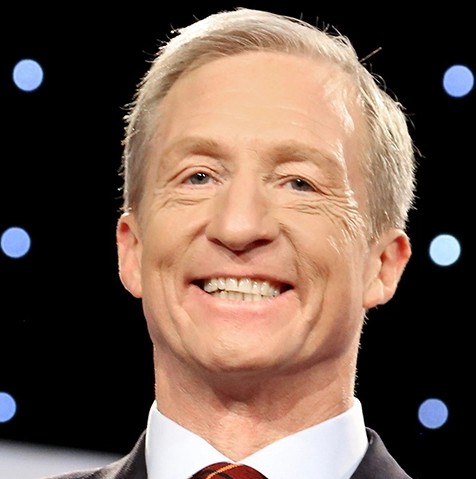 Tom Steyer is an American hedge fund founder, philanthropist, environmentalist, social activist, and fundraiser named Thomas Fahr Steyer. He is also a Democratic Party presidential nominee for 2020, and he is the founder and former co-senior managing partner of Farallon Capital, as well as the co-founder of Onecalifornia Bank, which became Beneficial State Bank, an Oakland-based community development bank, through a merger. From 2007 to 2017, he was a member of the Stanford University Board of Trustees. His net worth is $1.6 billion as of January 2020.

In South Carolina and Nevada, Tom Steyer is on the rise.

Tom Steyer’s unexpected victory in recent polls in South Carolina and Nevada is igniting a debate inside the Democratic Party about billionaire candidates’ ability to raise their profiles and win a position on the debate stage through extravagant spending. Steyer, who has never held elected office and polls in the low single digits nationally, shocked many observers by placing second in a recent South Carolina poll and gaining considerable ground in Nevada. This comes after months of saturating the airwaves in two states where most other candidates have received fewer advertising coverage. His ability to convert his personal wealth into a spot onstage, while longtime elected officials like Sen. Cory Booker (D-N.J.) have been unable to do so, is causing increasing discord within the Democratic Party, particularly at a time when income inequality is a hot topic among Democrats.

Being a presidential nominee for the Democratic Party in 2020. Farallon Capital’s founder and former co-senior managing partner, as well as the co-founder of Onecalifornia Bank.

Tom Steyer was born Thomas Fahr Steyer on June 27, 1957, in Manhattan, New York. He is one of Marnie (nee Fahr) and Roy Henry Steyer‘s three sons. His father was a lawyer who rose through the ranks of Sullivan & Cromwell in New York, and his mother was an educator who taught remedial reading at the Brooklyn House of Detention at one point. His two brothers are civil rights activists, child advocates, educators, and authors James “Jim” Pearson Steyer and Hume Steyer, a partner at Seward & Kissel LLP. He started his education at Buckley School in New York City before enrolling at Phillips Exeter Academy in Exeter, New Hampshire, a co-educational boarding school. In 1975, he enrolled at Yale University to pursue degrees in economics and political science. He then went on to Stanford Business School, where he obtained his Master of Business Administration degree (MBA). He celebrated his 62nd birthday with his mates in 2019. His nationality is American, and his race is White. He is a devout Christian.

Tom worked for Morgan Stanley from 1979 to 1981, and it was his first job in the banking industry.

He then moved on to Stanford University to pursue his MBA.

He served as an associate in Goldman Sachs’ risk arbitrage division after graduation.

He was mostly in charge of mergers and acquisitions from 1983 to 1985.

He founded Farallon Capital Management, which has its headquarters in San Francisco. In 2011, its market capitalization was reported to be $21 billion.

To better serve their east coast clients, the company opened an office in New York and expanded its activities beyond the US border. It has offices in Singapore, Hong Kong, Tokyo, and London.

He is still well-known in the industry for his unorthodox approach to his work, despite having retired several years ago.

In 2007, he and his wife created OneCalifornia Bank and OneCalifornia Foundation, which has a “triple bottom line” that maintains a profit margin, promotes environmental sustainability, and increases economic opportunities in underserved areas, with $22.5 million in capital. Steyer and his wife are not paid in any way.

The bank merged in August 2010 after acquiring ShoreBank Pacific, a Washington-based community bank.

He left his position at Farallon Capital in 2012 to focus on becoming a vocal supporter of renewable energy.

The facilities to which he donated funds are projected to last until 2030, according to the experts.

In terms of politics, he first got involved in politics in 1983, when he served on Walter Mondale’s presidential campaign.

He originally supported Hillary Clinton, but during the Democratic Party’s presidential primaries in 2008, he became one of Barack Obama’s biggest fundraisers.
Following his election victory in 2008, Obama was considered for the positions of Treasury Secretary and, later that year, Energy Secretary.
With former Secretary of State and Republican George Shultz, he co-chaired the No on Prop. 23 campaign.

He delivered a speech at the Democratic National Convention in 2012.

During the 2016 presidential election in the United States, he supported Hillary Clinton.

He spent about $10 million in an attempt to impeach Donald Trump, the incoming US President, in 2017.

He declared his candidacy for president in the Democratic primaries in 2020 in an online campaign video posted to Twitter on July 9, 2019.

In January 2019, he claimed in an Iowa speech that he is “not running for president at this time.”

He’s announced that he’ll bring $100 million into the race.

His campaign announced that it had reached 130,000 individual donors, which is one of two requirements for inclusion in the Democratic debate on September 13th.

He was unable to attend the Democratic debate on September 8, 2019.

On October 6, 2019, Steyer met the polling and donor thresholds needed to participate in the November debate.

He polled over 4% in four different state-wide polls on November 18th, meeting the polling threshold for the December debates.

He registered at the last minute for the Democratic Presidential candidate debates on January 14, 2020.

The date is scheduled for Thursday, January 9th, 2020.

Tom Steyer’s marital status is that of a married man. He has been married to Kathryn “Kat” Ann Taylor since August 1986. After graduating from Harvard, she went to Stanford for her J.D./M.B.A. The wedding was officiated by Presbyterian priest Rev. Richard Thayer and Rabbi Charles Familia. Their three sons are Samuel Taylor (“Sam”), Charles Augustus (“Gus”), and Henry Hume (“Henry”), and their daughter is Evelyn Hoover (“Evi”). Currently, the couple is living a happy, conflict-free life. They seem to be having a wonderful time. He identifies as a straight man.

What is the net worth of Tom Steyer?

This well-known philanthropist and fundraiser are estimated to have a net worth of $1.6 billion as of January 2020. His primary source of income is his political career. His pay is still being determined, but it will be added as soon as more information becomes available. He is happy with his earnings in general. He is able to enjoy a lavish lifestyle thanks to his earnings.

How tall is Tom Steyer?

Tom Steyer, who is 62 years old, also has a youthful appearance. At this age, he has a rather attractive appearance. He stands at a great height of 1.74 meters and weighs 66 kilograms. His other body dimensions are yet to be revealed by any sources, but they will be added as soon as we learn more. He has a good body and a charming face in general.

Our contents are created by fans, if you have any problems of Tom Steyer Net Worth, Salary, Relationship Status, Married Date, Age, Height, Ethnicity, Nationality, Weight, mail us at [email protected]