Andy Murray is a British professional tennis player from Scotland currently ranked No. 229 in men's singles as of 14 January 2019. 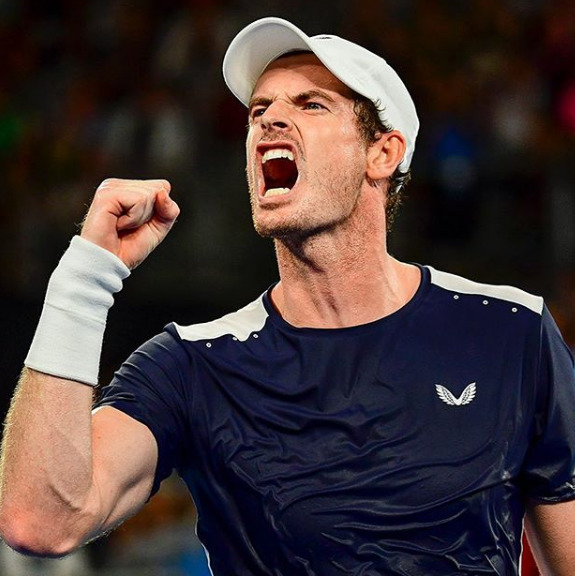 Andrew Barron Murray is a British professional tennis player from Scotland currently ranked No. 229 in men’s singles as of 14 January 2019. He is Professionally Known as Andy Murray.  He represents Great Britain in his sporting activities and is a three-time Grand Slam tournament winner, two-time Olympic champion, Davis Cup champion, winner of the 2016 ATP World Tour Finals and former world No. 1.

Murray was born to Judy Murray and William Murray in Glasgow, Scotland as an Andrew Barron Murray. He is a supporter of Hibernian Football Club, a team which his grandfather represented. His elder brother is also a tennis player. He wasn’t physically fit in the early days of his life because of his knee problem due to which he had to leave many events. She showed his love towards the sport and started playing at the early age of three in the local courts. His first competitive tournament came when he was just eight years old. At the age of 10, he began to compete with adults in the Central District Tennis League.

His childhood wasn’t so easy when his parents split up at the age of 10. He also gives the credit of his competitive nature to this incident. He had won the Orange Bowl, a junior level prestigious tournament twice at the age of 12 and 14. Besides tennis, he was a really good footballer so that, he got a chance to train in Rangers Football Club at the age of 15 but he refused it and concentrated more in tennis.

Andy Murray began his career in the year 2005 when he was ranked world No. 407. But soon he had to take 3 months to leave because he hurt his back when he was playing in South America. Murray made his first ATP final at the Thailand Open against the world No. 1 Roger Federer, where he lost in straight sets. Back in 2005 when Murray got the chance to captain his country, he and his brother Jamie Murray played doubles and beat England. Soon after that he ranked 64 and named the BBC Scotland Sports Personality Of The Year.

He became the world No. 10 after the Miami Masters where he reached semi-finals. His career took a new turn when he won Olympic Gold in 2012 beating Roger Federer. Moreover, he thrashed Novak Djokovic in the final of US Open in 2012. Soon after that, he again defeated Djokovic in 2013 Wimbledon final to lift the Wimbledon. Later on, he can’t continue his winning streak and lost to Djokovic in Australian open (2015, 2016) and French Open in 2016. Murray continued his Olympic Gold Medal winning streak in the Rio Olympic 2016. Now he is fully focused on this year Wimbledon 2017 to seal the nerve again. He is one of the favorites alongside Roger Federer, Novak Djokovic, and Rafal Nadal.

Awards and Achievements of Andy Murray

Being the world No.1 tennis player he has not only lifted many titles but also grabbed several awards. In the young age of 14, he got the award for BBC Young Personality of the Year. He has also won BBC Sports Personality of the Year in the year 2013, 2015 and 2016. In 2017, he was honored with a “Knight Bachelor’.

Net Worth of Andy Murray

According to our reports, Andy Murray is earning approximately $15 million annually. He is also listed in the top 50 highest paid athletes. He has a net worth of $85 million.

Murray was a married man. He started dating Kim Sears in 2005. After the successful long term relationship, they got engaged in November 2014 and then tied the knot on 11 April 2015. They are blessed with a babies Sophia Olivia born in 2016 and Edie born in 2017. They are leading a happy married life. There are no rumors of any kind of extra-marital affairs or past relationships.

Murray has a hot and athletic body with a towering height of 6 ft 3 inches and weighs 84 kg. He looks so dashing with his wide 40 inches. chest and fit arms. Similarly, he has 30 inches. waist and 15 inches. Bicep. He has light brown hair and attractive hazel eyes. His shoe size is 12.5 (US).

Our contents are created by fans, if you have any problems of Andy Murray Net Worth, Salary, Relationship Status, Married Date, Age, Height, Ethnicity, Nationality, Weight, mail us at [email protected]