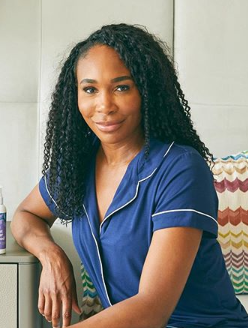 Venus Williams is a name to be reckoned with in the world of women’s tennis. Her talent at the game is clear in the fact that she not only won several matches and championships but also went on to become the first African American to be ranked No. 1 in the world.

She started her professional career at the age of fourteen and the rest is history. She honed her skills and prowess in game after game to bring out the best in herself. Her agility around the net, explosive hitting ability, and excellent service have made her a top-tier player, with her holding the record for the fastest serve struck by a woman in the main draw match. She is also an outstanding entrepreneur, in addition to being an ace tennis player. This article will include more information about the player.

What is Venus Williams well-known for?

A professional tennis player from the United States.

Venus was born in the United States in the year 1980 to Richard Williams and Oracene Price in Lynwood, California. She is of Afro-American descent and is of American nationality. She is the youngest of four children. When she was four years old, her family relocated to Compton. This change of scenery provided her and her younger sister, Serena Williams, with the opportunity to try their hand at tennis.

She had such a natural talent for the game that at the age of eleven, she was ranked No. 1 among the under-12 players in southern California. However, she removed their name from the academy due to racial problems and demeaning remarks from society. Her father then took on the challenge of self-teaching his daughters how to play the game and became their official coach.

Venus started her professional career at the age of fourteen when she took part in her first official game. Despite losing the match, she led Arantxa Sanchez Vicario, the World No. 2, by a set and a service break at one point.

In 1995, she played in three tournaments. Despite losing all three matches, she reached the quarterfinals in Oakland and defeated World No. 18 Amy Frazier.

She repeated the feat in 1996, losing four times in the first round but making it to the third round before losing to World No. 1 Steffi Graf in Los Angeles.

The year 1997 brought her positive news for the first time in her life: she had succeeded. She qualified for the Top 100 by reaching the quarterfinals of three of the five Tier I tournaments.

The US Open was the most competitive of the three, with her reaching the finals before losing to Martina Hingis. As a result of her outstanding performances, Williams has risen to 22nd in the ATP world rankings.

She defeated Joannette Kruger in the 1997 IGA Tennis Classic in Oklahoma City to win her first singles title. Despite failing to qualify for the finals of the State Farm Evert Cup in Indian Wells, she went on to win the Lipton International Players Championships, defeating then-World No. 1 Hingis. She climbed to tenth place in the ATP world rankings as a result of this.

Her Grand Slam results in 1998 were better than in previous years, as she advanced to the quarterfinals of each of the four Grand Slam tournaments. Her prowess in the game secured her the World No. 5 rankings on July 27th, 1998.

In 1998, she and Justin Gimelstob won the Grand Slam mixed doubles event. Serena Williams, her younger sister, claimed the other two titles, dubbed the “Williams Family Mixed Doubles Grand Slam” for the year.

In 1999, she was defeated in the semi-finals of both the Australian Open and Wimbledon by Davenport and Steffi Graf, respectively. Her success at the US Open, on the other hand, paid off, as she reached the semi-finals before losing to Martina Hingis in three sets. She stretched her winning streak to 22 matches at the French Open before losing in the fourth round to World No. 125 Barbara Schwartz.

In the other tournaments in 1999, she beat some of the best players in the game, including Novotna, Steffi Graf, Mary Pierce, Lindsay Davenport, Monica Seles, and others. As a result, she was able to reach the World No. 3 rankings by the end of the year.

Despite her increasing singles victories, her partnership with sister Serena was fruitful, as the two won women’s doubles titles at the French Open and the US Open in 1999. They went on to win numerous other awards in the category after that.

In the year 2000, she started her reign of terror over the game. She reached the quarterfinals of the French Open after missing the first few months of the year due to a wrist injury.

She went on to win 35 consecutive singles matches and six consecutive tournaments. She captured her first Grand Slam singles title the following year, beating Martina Hingis at Wimbledon. The Williams sisters then teamed up to take the women’s doubles title at the event.

Her win at the US Open was noteworthy because she beat Hingis and Davenport, the world’s top two players at the time. She defeated Sanchez Vicario in the quarterfinals, Seles in the semi-finals, and Elena Dementieva in the final to win a gold medal at the Sydney Olympics. The Williams twins have won gold in women’s doubles. During the beautifully crafted year, Williams won six singles titles and was ranked No. 3 in the world.

Venus Williams had a mirror impact in terms of success in 2001. She not only advanced to the Australian Open semi-finals, but she and her sister also won the year’s doubles title, completing their Career Grand Slam of women’s doubles.

Her success in Tier-II tournaments was exceptional. In the semi-finals, she beat Hingis, and in the final, she beat Jennifer Capriati, the World No. 4. As a result of her victory, Williams climbed to World No. 2 for the first time in her career.

In 2001, she successfully defended her titles at the US Open and Wimbledon, becoming just the sixth woman in history to win both events in the same year. In the US Open final, she faced Serena Williams, marking the first time in the open era that two sisters played in a Grand Slam singles final.

On February 25, 2002, she was ranked No. 1 in the world. Despite only holding the role for three weeks, she was the first African-American woman to do so.

In the 2002 Grand Slams, she lost in the quarterfinals of the Australian Open to Monica Seles. She reached the finals of the French Open, US Open, and Wimbledon, but was defeated each time by Serena Williams, who soon displaced Venus as the world’s No. 1 tennis player.

The Williams sisters’ reign of terror came to an end at Wimbledon, when they claimed their fifth Grand Slam women’s doubles title together. After winning seven championships, she finished the year as the World No. 2 in the world.

She began the year 2003 on a high note, qualifying for the Australian Open final for the first time in her career. She won Wimbledon, beating Lindsay Davenport and Kim Clijsters before losing in the finals to her niece, despite poor results at the French Open. The duo captured their sixth Grand Slam title in the women’s doubles event.

Injuries followed her from 2003 to 2006, putting an end to her winning streak. Williams was unable to win a championship due to her injury, despite winning a few matches.

She had a disappointing year in 2006, despite being one of the most exciting championship prospects, as her injury deteriorated and she failed to build on her winning streak. As a result, Williams finished the season as the World No. 46.

In her professional career, Venus Williams had successful second innings. Despite losing out on the Australian Open in 2007, she won Wimbledon, becoming the fourth woman to win the tournament at least four times in the open era.

She advanced to the US Open semi-finals, where she was defeated by Justine Henin. Williams finished the year ranked No. 8 in the nation, with three championships and an 83 percent winning percentage.

Her success at the 2008 Grand Slam was outstanding. She advanced to the quarterfinals of both the Australian and US Opens, but she successfully defended her Wimbledon title, giving her a total of seven Grand Slam singles titles and five Wimbledon titles.

Following their success in Sydney in 2000, the Williams sisters earned their second gold medal in women’s doubles at the Beijing Olympics. She finished sixth in singles and third in doubles with Serena Williams the following year, in 2009.

What are Venus Williams’ accomplishments?

When it came to his education, Ledger initially dropped out of school to pursue an acting career. In 1992, he made his acting debut in the film Clowning Around, in which he played a supporting role. In the television series Ship to Shore, he played a cyclist.

He played Snowy Bowles in the television series Sweat in 1996. He also starred in Blackrock, Home and Away, Paws, and Roar in 1997.

In 1999, he played Patrick Verona in the film 10 Things I Hate About You. He’s also featured in a variety of other movies and TV shows. He had 23 acting credits to his name.

In addition, he had three directing credits. His performance as the Joker in The Dark Knight (2008) was hailed as one of the best by a film actor.

He died of a cardiac arrest caused by prescription drug intoxication on January 22nd, 2008.

In terms of her personal life, Venus has been romantically involved with professional golfer Hank Kuehne since 2007. They had great chemistry and shared a mutual understanding. They did, however, break up in 2010.

She is reportedly dating Elio Pis, a Cuban model. When the latter posed for her fashion line, EleVen, the two first met. At the moment, the lovebirds are having a good time in their relationship.

She now maintains a vegan diet, which helps to minimize inflammation and the disease’s energy-sapping effects by cutting back on calories, toxins, and sugars.

What is Venus Williams’ net worth?

Venus, as a professional tennis player, receives a sizable sum of money and fame as a result of her work in the sports industry. Her current net worth is estimated to be $200 million, according to some online sources. Her pay, however, has yet to be announced.

Venus is 6 foot 1 inch tall and weighs about 75 kilograms, according to her body physics. She, too, has a pair of black eyes and dark hair. She wore a 34B bra size and a US size 6 she. Her body measurements are 35-26-35 inches.

Our contents are created by fans, if you have any problems of Venus Williams Net Worth, Salary, Relationship Status, Married Date, Age, Height, Ethnicity, Nationality, Weight, mail us at [email protected]