Ashleigh Barty is an Australian professional tennis player and former cricketer. She plays right-handed. Barty is the top-ranked Australian in both women's singles and doubles. 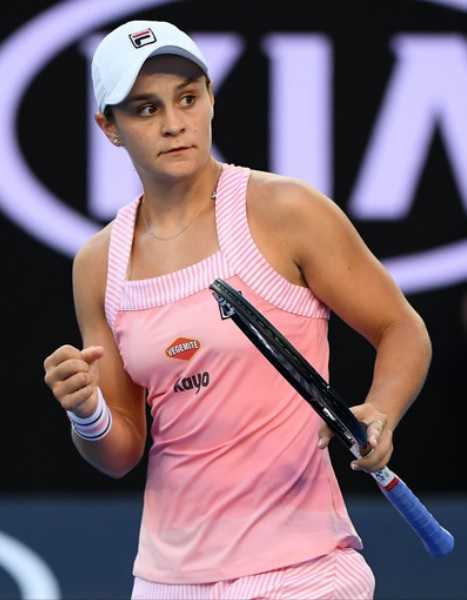 If I win, it's a bonus. If I lose, the sun still comes up the next day, and it's all good

There's no need to look too far into the future or the past. Enjoy the moment

otherwise, there's no point walking out on the court, really

Ashleigh Barty is an Australian professional tennis player and former cricketer. She plays right-handed. Barty is the top-ranked Australian in both women’s singles and doubles. She currently ranks at WTA No. 1 in singles and No. 19 in doubles. She has won five singles titles and ten doubles titles on the WTA Tour. She turned pro in 2010. She took an indefinite break from tennis in late 2014 until she returned in early 2016. During the break, she played cricket in the Women’s Big Bash League.

What is Ashleigh Barty Famous For?

Where was Ashleigh Barty Born?

Ashleigh Barty was born on 24 April 1996. She was born to a father Robert Barty, and a mother, Josie Barty. Her birthplace is in Ipswich, Queensland in Australia. She holds Australian nationality. She has two older sisters, Sara, and Ali. She grew up in Springfield.

She started playing tennis at the age of four. She was already playing against adult males by the age of 12. She also played netball as a child.

She reached a career-high ITF world junior ranking of No. 2 in the world.

She played her first junior Grand Slam event in 2011 at the Australian Open.

She won her only Grand Slam title at Wimbledon at the age of 15.

She became just the second Australia to win the girls’ singles event after Debbie Freeman in 1980, and the first Australian girl to win any junior Grand Slam singles title since Jelena Dokic at the 1998 US Open.

She finished the season with the Junior Fed Cup title with teammate Belinda Woolcock.

She made her singles and doubles main draw debuts on the WTA Tour in early 2012.

She made her Grand Slam draw debut at the 2012 Australian Open.

She won four ITF titles in both singles and doubles.

She won her first two WTA Tour-level matches at the Malaysian Open.

She became the youngest Grand Slam finalist since Tatiana Golovin after she reached the Australian Open finals in doubles.

She and Dellacqua became the first Australian duo to reach an Australian Open women’s doubles final since Evonne Goolagong and Helen Gourlay in 1977.

She and Dellacqua won the Birmingham Classic final.

She finished the 2013 season as the World No. 12 in the doubles rankings.

She and Dellacqua won their second title together at the Internationaux de Strasbourg during the clay season.

She announced after the 2014 US Open that she is taking a break from professional tennis.

She met the Australian women’s national team in early 2015 to discuss her experience as a professional athlete. She then became interested in potentially playing cricket. However, she had no competitive cricket experience until then.

She began training with the Queensland Fire in July. She started playing for the Western Suburbs District Cricket Club in Brisbane’s Women’s Premier Cricket Twenty20 league.

She also signed with the Heat for the inaugural Women’s Big Bash League (WBBL) Twenty20 season. She remained a regular member of the team for the season finishing with a 7-7 record.

She returned to tennis in February 2016 after the end of the WBBL season.

She returned to singles in late May 2016.

She returned to the WTA Tour qualifying for the Nottingham Open.

She suffered a bone stress injury in her arm and played only one event, the 125K Taipei Challenger in November 2016.

She won her first career WTA singles title in 2017 and entered the top 100 for the first time.

she earned her first career top-ten victory after defeating world No. 9 Venus Williams at Cincinnati.

She reached a WTA ranking of No. 27 after she reached the third round at the 2017 US Open.

She reached a WTA ranking of No. 23 after defeating No. 7 Johanna Konta, No. 4 Karolina Pliskova, and No. 10 Jelena Ostapenko at the Wuhan Open.

She and Dellacqua reached the finals at the French Open becoming the first Australian women’s doubles team to reach all four Grand Slam finals. The pair reached six finals during the year. They won their second Birmingham Classic title.

She reached the final at the Sydney International in 2018.

She won the Nottingham Open on the grass in 2018. She defeated British No. 1 Konta in the final. It was her second career WTA title.

She won the biggest title of her career, the 2018 WTA Elite Trophy, defeating Wang Qiang in the final.

She and Dellacqua reached the third round at the Australian Open. This was the pair’s last WTA tournament together. Dellacqua retired after the tournament.

She partnered with American CoCo Vandeweghe and went on to win the 2018 Miami Open. It was Barty’s first Premier Mandatory title.

She partnered with Demi Schuurs and win the 2018 Italian Open and 2018 Canadian Open.

She reached a career-high WTA doubles world ranking of No. 5.

She reunited with Vandeweghe and went on to win her first career Grand Slam title at the US Open. They defeated Timea Babos and Kristina Mladenovic in the final.

She reached the Sydney International final in 2019, where she lost to Petra Kvitova.

She reached a new career-high ranking of No. 14 after her performance at the Australian Open.

She reached the Grand Slam final for the first time at the 2019 French Open. She defeated Czech Marketa Vondrousova in straight sets. The win was her maiden Grand Slam Championship.

Who is Ashleigh Barty Dating?

Ashley Barty is unmarried. She is dating golfer Gary Kissick.

What are Ashleigh Barty Body measurements?

Ashleigh Barty stands at a height of 1.66 m i.e. 5 feet and 5 and a half inches tall. She has an athletic body build.

What is Ashleigh Barty Net Worth?

Ashleigh Barty earns from her professional tennis career. She has won $7,366,380 prize money playing tennis to date. Her net worth is estimated at $4 million.

Our contents are created by fans, if you have any problems of Ashleigh Barty Net Worth, Salary, Relationship Status, Married Date, Age, Height, Ethnicity, Nationality, Weight, mail us at [email protected]