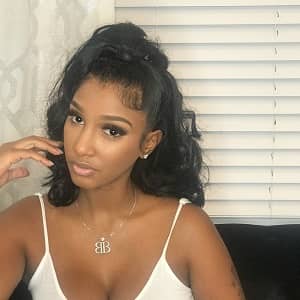 Bernice Burgos is a popular American model, entrepreneur, and social media personality. She rose to fame thanks to her looks and physique on social media. Notably, she has also appeared in J.Cole and Rick Ross’s music videos and was featured on Wild ‘N Out.

When was Bernice Burgos born?

Bernice Burgos was born on the 17th of April, 1980 in the Bronx, New York City, U.S.A. As of 2020, her age is 40. Her nationality is American and she comes from Puerto Rican descent with Latino and Hispanic ethnicity.

Bernice has not revealed much about her parents, not even their names. Even so, she frequently shares pictures featuring her mother and sister. Burgos was raise in the Tri-state area, alongside her sister. Growing up, Bernice had it hard due to an unplanned pregnancy at the tender age of 15. This got her kicked out by her own grandmother, and she lived for a while at her mother’s house. Her boyfriend was also abusive and she had to drop out of school to care for her baby.

After dropping out due to her early pregnancy, it’s not likely that Bernice resumed her education. She also has not stated which school she attended before dropping out.

How did Bernice Burgos build her career?

At the start, Bernice worked as a bartender and also as a waitress. After working these jobs for some time, she decided to go into modeling. Her good looks and slim physique certainly helped, and pretty soon she was doing ramp walks and modeling for various magazines. Her fan following also grew substantially after she got into modeling. Despite her popularity, she remained humble and down to earth, continuing to work as a waitress and bartender.

Some magazines that featured her in the early 2000s are Show Magazine, Eye Candy, King Magazine, XXL, etc. She even acted in many music videos in these years, notably Rick Ross’ video for Diced Pineapples and J-Cole’s video for Work Out. She has also appeared on TV and film a couple of times. Her notable appearances in this regard are MTV’s Wild ‘N Out and the movie Notorious B.I.G. Bernice even has her own clothing and lingerie line, Bold & Beautiful. Aside from all this, she is also a massive personality on social media with millions of followers.

What is Bernice Burgos’ net worth?

As of 2020, Bernice Burgos has an estimated net worth of approximately 1.1 million U.S. dollars. Also, her annual salary is estimated to 500k.

What are Bernice Burgos’ physical statistics?

Bernice stands at a height of 5 feet 7 inches and weighs approximately 54 kilograms. She is blessed with beautiful dark brown eyes and dark brown hair. Her body measurements are 38-25-40 inches.

Who is Bernice Burgos dating?

As of now, Bernice is dating NBA superstar James Harden. Their relationship doesn’t seem too serious as Bernice has stated that she is just doing it to makes her ex-boyfriend T.I. jealous.

Bernice has two children, Ashley and Amarie Burgos. Ashley was born on the 9th of May, 1996  when Bernice was just 15. Not much is known about her younger daughter Amarie, and Bernice has not even revealed who her father is.

Our contents are created by fans, if you have any problems of Bernice Burgos Net Worth, Salary, Relationship Status, Married Date, Age, Height, Ethnicity, Nationality, Weight, mail us at [email protected]